2021 Nissan Titan XD Pros vs Cons. Should You Buy? 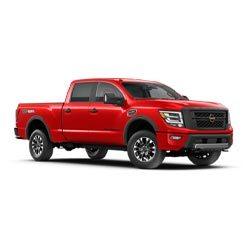 Should You Buy a 2021 Nissan Titan XD? Here Are Some Reasons For and Against

The Nissan Titan is a solid pickup truck, and the Titan XD is an even tougher model. Anyone in the market for something that's sturdy and durable should consider the 2021 Nissan Titan XD because it offers a complete package. It has much more than just good looks, but of course, having a rugged style definitely will help it gain a lot of attention. It's a very capable model that has advanced technology and numerous amenities in place to keep people satisfied.

The 2021 Titan XD looks almost identical to the one from the previous year. This is likely because Nissan made a lot of changes when designing the 2020 Titan XD, so more changes weren't necessary just yet. For 2020, it altered the grille and tailgate, updated the headlights on higher trims, and made a handful of new exterior colors available. 2020 was the year in which Nissan took away the diesel option and upgraded the gas-powered engine.

The 2021 Titan XD is definitely something that people can count on. It can churn out 400 horsepower, thanks to a 5.6-liter V8 that's under the hood. It comes with 413 pound-feet of torque, and the engine is paired with an automatic transmission that has nine speeds. A bonus is that four-wheel drive is included. This makes the truck equipped for a range of conditions, and the 4x4 system is switch-operated system and has a two-speed transfer case.

A benefit of driving the Titan XD is that it can tow quite a bit. With a receiver hitch, the truck can tow up to 10,880 pounds. Select trims can be set up with a gooseneck hitch, and this would boost their towing capacity to 11,040 pounds. Either way, people can feel free to load up their trailers and head out on adventures in their Nissan. Since the bed is 6.5 feet in length, it can also hold a lot.

All of the Titan XD trims come with a crew cab configuration. Given the width and height of the cabin, everything feels very spacious. Some of the trims can be built to have a bench seat in the front, expanding seating accommodations from five to six. With either layout, people in the front can have almost 42 inches of leg room. In the second row, there's 38.5 inches of leg room, so there would be space to accommodate three adults.

Nissan has made the Titan XD with many high-tech safety components. All of the trims have a package of driver-assist features that can look out for problems, alert drivers to potential issues, and potentially take action. Lane departure warning, a driver alertness system, and blind spot monitoring can all make a driver more aware of what's going on.

Since the truck has forward collision warning and emergency braking, it can sense imminent frontal collisions and hit the brakes if necessary. This is regardless of whether a pedestrian or another vehicle is in the truck's path. Other available features include traffic sign recognition, automatic high beams, and rear cross traffic alert.

It's not a secret that the Titan XD is a large vehicle that may be difficult to park. Fortunately, there are a few things in place to make it easier to maneuver in tight spaces. It has a rear sonar system that can give people information about how close they are to objects behind them. If a driver keeps reversing despite this information, the Titan XD can engage rear automatic braking. A similar system warns drivers about objects in front of them, and the available Intelligent Around View Monitor can help drivers avoid getting scratches and dings on their vehicles.

An eight-inch touchscreen is standard on the Titan XD, and a nine-inch touchscreen can be found on the higher trims. The touchscreen automatically comes with Apple CarPlay and Android Auto, along with Bluetooth and SiriusXM. This means there are plenty of ways to stay entertained and keep in touch with others while on the road. Additionally, every model can act as a Wi-Fi hotspot. Since people have a lot to keep track of when they're driving, it's nice to have voice recognition built into the truck. The higher trims also come with navigation.

Nissan makes five trims of the 2021 Titan XD. This gives people a lot to consider. The S is an excellent choice for people on a budget, as it has a lot more features than people might expect from a base model. The SV has some more higher end amenities than the S, the Pro-4X is a fun vehicle to drive, and the SL has an upscale feel to it. Finally, the Platinum Reserve has some luxurious touches inside and out.

If anyone wants to drive something unique, there's the Pro-4X. It has bright red exterior accents that can really catch someone's eye, and the seats can stand out with contrast stitching and embroidered logos. The Pro-4X doesn't just have the look of a tough truck. It has what it takes to conquer rough terrain. Skid plates, Bilstein shocks, tires that can handle a variety of terrain, and an electronic locking rear differential can all be found on the truck.

The Platinum Reserve can treat people to a nice ride. Both front seats are power-adjustable and can be heated or cooled depending on the temperature. The driver's seat has a memory system so it can remember the preferred position, and the memory function is also built into the steering wheel and side mirrors. The premium leather on the seats feels soft and looks sophisticated, and the leather steering wheel is equally posh with a heating element and wood-tone insert. Chrome and satin bronze accents top things off in the cabin.

The details on the outside of the truck have all been carefully thought out. Some trims come with tow hooks, skid plates, and fog lights, and all of these components do their jobs well while looking stylish. The Titan XD can have LEDs in its taillights, headlights, and daytime running lights, and some trims have a two-tone color scheme. Side mirrors can be heated, feature puddle lights to welcome people, and tilt down while the vehicle is in reverse to help with steering.

The reality is that heavy-duty trucks aren't cheap, especially once people decide they need something more than a model with only three seats, basic vinyl upholstery, and technology from the last decade. That being said, the Nissan Titan XD has a relatively affordable price. It starts out around $45,000, and this should be doable for many people.

There are a lot of trucks out there that offer two, three, or even more engine options. It goes without saying that people who drive trucks care about performance, and making several engines available is a smart move. For some reason, Nissan decided to stick with just one engine on its 2021 Titan XD. It should be fine for the majority of drivers, but there may be some that will look elsewhere because they want more out of their trucks.

The Platinum Reserve sits at the top of the Titan XD lineup. It costs a little more than $60,000, and it has a lot of nice features, as described in an earlier section. When comparing it the premium trims of some other well-known pickups, though, it may seem a bit lacking. There are many ways in which Nissan could have taken the Titan XD to the next level. For example, it could have 21- or 22-inch wheels, a larger touchscreen, a better sound system, and more sophisticated interior trim.

Many people love their technology whether it really makes things easier or is simply fun to use. There are a few trucks that have advanced camera systems that let people see the truck and its surroundings from multiple angles. With these cameras, they could potentially see what's going on in the trailer, what's directly behind the trailer, and what's in front of the vehicle while it's in motion (and not just while parking). While the Titan XD has a standard rearview monitor and an available all-around view, it doesn't have anything beyond that.

Nissan has built a reliable and capable vehicle with its Titan XD. The 2021 model year is packed with modern technology to keep people safe, entertained, and connected to the network. People will appreciate the generous size of the Titan XD's cabin, along with all the amenities that can make things more convenient. Above all else, many people will be attracted to the Titan XD because of its strong engine.