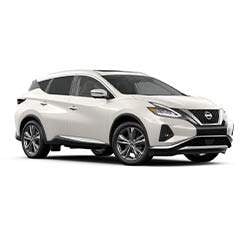 Compare the 2022 Nissan Murano Trims - S vs SV vs SL, Midnight Edition and Platinum. What is the difference between them?

The Murano is one of Nissan's more elegant models. As an SUV, it has an ideal amount of interior space. It's been equipped with advanced technology, and it has great style, too. For the 2022 model year, there's a new trim option called the Midnight Edition. It's really more of an appearance package that brings in some more aggressive elements. The other trims of the Nissan Murano have their own advantages as well, and this guide will go over those in detail.

There's nothing that separates the two trims in terms of what's under the hood. Like the other Nissan Muranos, they run on 3.5-liter V6 engines that can make 260 horsepower and 240 pound-feet of torque. Both front-wheel and all-wheel drive are available. All-wheel drive costs extra, but it does really boost traction when conditions are slippery.

There are a few key exterior differences between the S and the SV. While the S has LED headlights, LED Daytime Running Lights, and LED taillights, it does not have LED fog lights like the SV does. These fog lights are highly functional, as they can be useful when visibility is low. They also add to the general aesthetic of the SUV and make it look more modern.

As one would expect from a vehicle of this caliber, the outside mirrors are power-adjustable. On the S, that's pretty much their only feature, unfortunately. In comparison, those on the SV have heating elements and LED turn signal indicators.

The cabin of the S trim is comfortable, but it's far from being fancy. It has manually adjustable front seats and cloth upholstery. To create more space for bulky items, the rear seats can be folded down. Since the rear seatback has a 60/40 split, one side can be lowered at a time. Tie-down hooks and rings in the cargo area make it easy to secure items in the back.

With the SV, things are a bit nicer. This trim has a ten-way power-adjustable driver's seat with two-way power lumbar support, and its front-passenger seat is power-adjustable in four ways. Both of these front seats are heated, which can make the cabin feel much more cozy in the winter. Instead of cloth, the SV has leatherette upholstery. Its shift knob and steering wheel are wrapped in leather to bring more sophistication into the cabin.

The SV benefits from having an auto-dimming rearview mirror that can reduce glare at night. While both trims have the Nissan Intelligent Key system with push button start, the SV gets to have remote engine start with Intelligent Climate Control. This is very convenient on a particularly hot or cold day, as it lets the cabin temperature become more comfortable before passengers get in.

One nice thing about the key fob on the Nissan is that it has the ability to lower then front windows. When it's a sunny day, so much heat can build up inside the cabin. Lower the windows before getting in can make a big difference in terms of the interior temperature.

In general, the Nissan company does well in the area of technology. Each one of its Murano trims has a comprehensive infotainment system with an eight-inch color touchscreen. Apple CarPlay, Android Auto, voice recognition, Siri Eyes Free, and Bluetooth are some of the standard components that come with the infotainment package. SiriusXM is standard as well, which expands the entertainment options considerably.

Safety, too, is an area in which the company focuses a lot of its attention. The Murano S trim is complete with forward collision warning, pedestrian detection, automatic emergency braking, and a rearview monitor. In addition, it has intelligent lane intervention, blind spot warning, rear cross traffic alert, and rear automatic braking. It comes with a rear sonar system to assist with parking, and it has Intelligent Driver Alertness, which can alert people when they're driving erratically and need to focus more attention on the road.

With the SV, there are two additions. The first is a front sonar system that can prevent minor bumps and scrapes when parking and making maneuvers, and the second is intelligent cruise control. This system can make adjustments to the speed of the Nissan if the leading vehicle has adjusted its speed. The traditional cruise control program, which maintains a set speed until the driver turns it off or applies pressure to the brakes, is what's found on the base trim.

Compare the SV vs Midnight Edition. What is the difference?

Around the outside of the Midnight Edition, there are many more black elements. The grille is black, as are the outside mirrors, bumper accents, side body molding, badging, and license plate finisher. In addition, there are splash guards. Inside the cabin, the kick plates are illuminated to add more of a modern touch.

This trim will appeal to those who appreciate its bold style. With all of these extra details, the Midnight Edition costs about $1,400 more than the SV does. Some prospective buyers will be intrigued by this option.

Compare the Midnight Edition vs SL Trims. What is the difference?

The SL gets to have 20-inch wheels, too, but it has machine-finished aluminum-alloy wheels instead of black ones. With this trim, all of the black elements that were added to the Midnight Edition have been taken away. The SL has a chrome grille and chrome door handles, like the S and SV have. It has a silver roof rails that shine, and it's available with a dual panel panoramic moonroof that can make the cabin feel more open.

A motion activated liftgate is standard at the SL level. This is a convenient feature that will interest many buyers. To open up the liftgate, the key fob needs to be in close proximity, and someone just needs to kick his or her foot underneath the rear bumper.

Inside the cabin of the SL, there's more to take advantage of. First, the seats are covered in leather upholstery. This alone can increase the level of luxury.

The steering wheel of the SL is heated, as are the rear outboard seats. The driver's seat, as well as the outside mirrors, have a memory function so they can be programmed to remember an optimal position. Like the Midnight Edition, the SL has an auto-dimming rearview mirror. The SL's mirror also has a HomeLink transceiver so that it can act as a garage door opener. There aren't any illuminated kick plates on the SL, but it does have adjustable ambient LED interior lighting to help set the mood.

Moving up to the SL is associated with a few other notable upgrades. The SL treats passengers to a Bose premium audio system with 11 speakers, two of which are subwoofers. The standard sound system consists of six speakers. The SL also has integrated navigation and SiriusXM Traffic and Travel Link. When traveling in unfamiliar places or when trying to assess local traffic conditions, it can be so nice to utilize the navigation program on a vehicle's touchscreen.

The safety components on the SL have also been upgraded. The SL has traffic sign recognition so that it can remind drivers of changing traffic patterns or speed limits. Further, it has an Intelligent Around View Monitor that gives drivers a clear view of what's around them.

Compare the SL vs Platinum Trims. What is the difference?

Like the SL, the Platinum has 20-inch wheels. Its wheels look more upscale, though, since they are a dark hyper silver color. The dual panel panoramic moonroof that's optional on the SL is standard on the Platinum. Because of its size, it can really brighten up the cabin.

The SL, as mentioned, is pretty luxurious with its leather seats. The Platinum has even nicer seats that feature a semi-aniline leather, and they have diamond-quilted inserts. The front seats are heated and cooled, so they're able to provide additional comfort throughout the year.

A steering wheel might not seem like a part of the vehicle that requires much attention, but when it has extra features, it can be quite impressive. The Platinum's steering wheel is wrapped in a smooth leather, and it has a memory function, just like the driver's seat and outside mirrors do. Drivers can utilize its power-tilt and power-telescoping steering column to position it into just the right spot.

With the Platinum, people can use NissanConnect Services powered by SiriusXM. It links the Nissan Murano to a mobile device. Through Nissan's app, people can remotely start their cars, lock or unlock their doors, see maintenance alerts, get information about their tire pressure and fuel levels, and more. The NissanConnect app is simple to use, and it can give people peace of mind knowing that they'll be able to check on so many things from wherever they may be.

NissanConnect Services gives the SUV the ability to host a Wi-Fi hotspot through which seven devices can connect to the internet. In addition, it can connect the vehicle with emergency services, roadside assistance, and a Nissan Concierge team that can answer questions. It's something that today's consumers will appreciate and quickly get accustomed to using on a daily basis.

These Nissan Murano trims are all solid options. Of course, price is going to be a major consideration in someone's decision. The good news is that the S trim, the first one in the lineup, only costs about $33,000. The S has some great technology and driver-assist systems, but it does't even have heated front seats or a power-adjustable driver's seat. Some may find it to be somewhat basic inside its cabin.

The price of the SV jumps up a fair amount, to about $36,500. For this extra cost, consumers will get a lot of benefits. Those would include leatherette upholstery, remote engine start, heated front seats, and intelligent cruise control.

A more stylized version of the SV is the Midnight Edition. To be honest, it might not be a good choice for the average driver, but it could certainly catch the eye of those who like its aggressive nature.

The SL is priced at about $40,000, with the Platinum following it with a starting cost of approximately $44,500. These are pretty big price increases, but Nissan does provide these trims with important upgrades. For instance, the SL has leather seats, a 360-degree camera, and navigation. The Platinum takes things a step further with a dual panel panoramic moonroof, heated and cooled seats, NissanConnect Services, and a refined cabin with premium materials.

When taking budget into consideration, though, the SL and Platinum seem a bit too pricey. That leaves the SV as the best choice. It has a reasonable cost, and it lets drivers enjoy many convenient amenities.