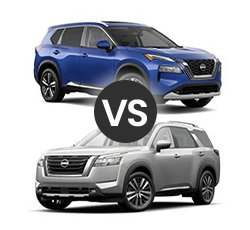 2022 Rogue vs Pathfinder - How Do They Stack Up? What are the differences?

Nissan has a great selection of family vehicles. The 2022 Nissan Rogue and the 2022 Nissan Pathfinder are both great options for folks who are looking for an SUV. While the Rogue seats up to five people, Nissan designed the three-row Pathfinder to accommodate a maximum of eight passengers.

For the 2022 model year, the Pathfinder has been redesigned from the inside out. It brings an enhanced driving experience and an updated list of features. An improved interior makes the latest Pathfinder more appealing. Meanwhile, Nissan has recently upgraded the Rogue with a stronger powertrain. In this comparison, we’ll find out which one of these Nissan models is the superior option.

In terms of size, the 2022 Nissan Pathfinder is noticeably larger than the 2022 Nissan Rogue. This SUV is nearly 15 inches longer and roughly 5.5 inches wider. Because of the Rogue’s smaller stature, it’s a more city-friendly vehicle.

Although the Rogue is more compact than the Pathfinder, it still proves to be a very accommodating family vehicle. There’s around 36.8 inches of legroom in its second row, which actually trumps the Pathfinder’s 35.5 inches of second-row legroom.

Outward visibility in the new Pathfinder is good. Drivers should be able to see well from all angles. They will appreciate the SUV’s large mirrors and upright windows. Car reviewers also compliment the Rogue on its excellent forward visibility. Although there are some rear blind spots, they are not overly distracting.

The larger Pathfinder naturally offers the most storage space. Its third row folds completely flat, thus making it easy to accommodate multiple golf bags and home improvement supplies. Drivers will have 45 cubic feet of space for their family’s extra gear. By comparison, there’s around 31.6 cubic feet of storage space in the Rogue’s cargo area.

Both of these SUVs score good marks in the styling department. However, the redesigned Pathfinder does have a more rugged-looking exterior. LED headlamps with slim daytime running lights come standard. A few eye-catching upgrades are available, including 20-inch alloy wheels and a black contrast roof. Plenty of cool paint colors are offered, such as Scarlet Ember and Obsidian Green.

The 2022 Nissan Rogue received a much-need performance boost. It has been upgraded with a stronger VC-Turbo four-cylinder engine, which puts out just over 200 horsepower and a stout 225 lb-ft of torque. By comparison, this crossover’s previous powertrain only developed 181 horsepower. A new and improved Xtronic continuously variable automatic transmission also helps enhance the Rogue driving experience.

On the road, the updated Rogue definitely feels more responsive. Drivers will be able to accelerate seamlessly from one stop light to the next. Expect the latest Rogue to also climb hills with less effort. Road tests show this crossover is now capable of recording a noticeably swifter 0-60 mph time of 7.5 seconds.

Instead of using a turbo four-cylinder engine, Nissan equips the new Pathfinder with a robust V6 engine. It’s tuned to squeeze out a gutsy 284 horsepower. There’s also a pleasing 259 lb-ft of torque resting under the hood, which optimizes the SUV’s responsiveness. Unlike the previous-generation Pathfinder, the new model is equipped with a nine-speed automatic transmission as opposed to a gearless CVT. This feature promotes a better overall performance.

The Pathfinder has no issues getting up to speed. It posted an impressive 0-60 mph time of 6.7 seconds. Not only will drivers be able to confidently merge onto a fast-moving freeway, but they can also easily ascend steep mountain roads.

Of these two Nissan models, the Pathfinder is by far the best vehicle for towing. It has the ability to pull up to a 6,000-pound load. Useful features, such as a tow mode and trailer sway control, are also offered on the Pathfinder. A lower tow rating of 1,500 pounds makes the Rogue less suitable for transporting boats and UTVs.

When equipped with all-wheel drive, the 2022 Nissan Rogue is a solid performer on snow-packed roadways. However, it’s also rugged enough to handle a basic camping path. Folks who plan to tackle more daunting trails will want the more adventurous Pathfinder. It offers an intelligent 4X4 system with built-in driving modes. The Mud/Ruts and Sand modes will come in handy when venturing off the beaten path.

Drivers who are looking to conserve fuel will favor the Rogue. It has a government-estimated fuel economy rating of 30 mpg town/37 mpg freeway, which is a noticeable improvement over last year’s model. Selecting all-wheel drive reduces this rating to 28 mpg town/35 mpg freeway.

Front-wheel-drive versions of the Pathfinder have an EPA fuel economy rating of 21 mpg town/27 mpg freeway. This isn’t bad efficiency for an eight-passenger family hauler. Of course, fuel economy dips when choosing the SUV’s 4X4 drivetrain.

On the street, the Rogue showcases its confident handling. While this crossover isn’t the sportiest in the class, it drives extremely well. A tighter turning radius also makes the Rogue a good option for maneuvering in confined urban areas. Furthermore, automotive critics continue to rave about the Rogue’s comfortable ride quality.

Don’t expect the heavier Pathfinder to feel as athletic as the Rogue. However, it’s quite surefooted for a three-row model. Many people will enjoy the SUV’s quick steering, which makes it more fulfilling to drive. While the Pathfinder’s suspension smoothly soaks up bumpy pavement, its overall ride quality is a bit stiffer.

In terms of braking, the Pathfinder delivers an above-average performance for the class. During 60-0 mph braking tests, it came to a stop in a short 114 feet. This is the same distance it takes the Rogue to come to a complete halt from 60 mph.

The Rogue remains quiet most of the time. Sound-deadening materials help create a hushed atmosphere. However, its powertrain can drone somewhat under hard acceleration. Slightly lower noise levels make the Pathfinder feel more like a luxury model.

In terms of overall comfort, both of these SUVs rank among the top models in their respective segments. The 2022 Nissan Rogue receives “Zero Gravity” front seats as standard equipment. Inspired by NASA, these unique seats help curb fatigue by keeping the person’s body in a neutral position. Test drivers also find the Pathfinder’s front seats to be cushy and supportive. This is good news for folks who spend a lot of time on the road.

The Pathfinder and the Rogue also benefit from reclining rear seats. On long drives, passengers will be able to lounge.

Most car shoppers will be more than happy with the Rogue’s list of available creature comforts. Front and rear passengers can enjoy the warmth of heated seats. Other available niceties include a heated steering wheel, tri-zone automatic temperature control, a panoramic sunroof.

In contrast to the Rogue, the 2022 Nissan Pathfinder offers ventilated front seats on its range-topping Platinum trim. Summer commutes will be a bit cooler. Nissan also offers the Pathfinder with second-row captain’s chairs.

Whether they choose the Pathfinder or the Rogue, buyers will receive a user-friendly NissanConnect infotainment system. The standard 8.0-inch touchscreen can be easily mated to the driver’s phone through either Apple CarPlay or Android Auto. Upgraded versions of the interior boasts a larger 9.0-inch touchscreen with wireless smartphone pairing. Navigation is another perk that comes with the top-of-the-line unit.

Other similar features available for these models include a head-up display, a widescreen digital gauge cluster, built-in Wi-Fi, and wireless charging. While the Rogue offers a 10-speaker Bose sound system, the Pathfinder can be equipped with a 13-speaker Bose stereo system.

The 2022 Nissan Rogue will be easier on the wallet. It has an appealing starting MSRP of around $26,700. By comparison, Nissan lists the Pathfinder with a starting price of $33,410. Most experts still consider the entry-level Pathfinder model to be a strong value.

The 2022 Nissan Pathfinder has yet to be evaluated by the federal government’s crash-testing agency. However, it did receive good impact scores from the IIHS.

An NHTSA four-star overall safety rating puts the 2022 Nissan Rogue a notch below some of today’s other compact crossovers. The good news is that the Rogue was named an IIHS Top Safety Pick+.

These SUVs offer ProPILOT Assist, which is a cutting-edge adaptive cruise control system with lane centering technology. An even more advanced version of this system is also offered. Navi-link seamlessly adjusts the vehicle’s speed when approaching curves and reacts to the posted speed limit.

Nissan’s available Around View Monitor camera system is a great investment. It gives drivers a complete view of the vehicle’s perimeter when parking and navigating in congested areas. Moving Object Detection is integrated into the system, thus further enhancing the driver’s level of awareness.

Drivers who don’t need to accommodate more than five passengers should strongly consider the 2022 Nissan Rogue. Its starting MSRP is thousands of dollars lower. Not only does the Rogue demand less money, but it also conserves more fuel. Despite being a smaller model, this compact crossover provides enough legroom to please most families.

With the arrival of a stronger powertrain, the Rogue no longer feels lifeless on the road. It now offers noticeably stronger acceleration and packs more low-end torque for climbing hills. All-wheel drive transforms the Rogue into a surefooted winter vehicle.

While there are quite a few upsides to the new Rogue, the redesigned 2022 Nissan Pathfinder has its own advantages. This three-row SUV’s stout V6 engine makes it a superior choice for towing. A more rugged 4X4 system also makes the Pathfinder more suitable for traveling on off-road trails.

Keep in mind that these two models offer many of the same amenities. They both come standard with today's most desirable safety and infotainment features. While the Nissan Rogue lacks the availability of ventilated front seats, this is unlikely to be a dealbreaker for most car shoppers.