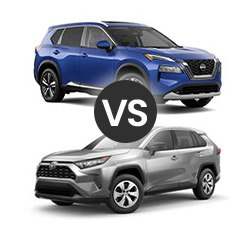 Two-row SUVs have enjoyed a lot of success in the market. The Nissan Rogue and Toyota RAV4 have been around for a long time, and they've performed quite well. They have much to offer, including excellent capability, ample interior space, convenient amenities, and an athletic style.

Nissan makes four trims of the Rogue. Things are a bit more complex with the RAV4 since Toyota makes 12 trims. Half of them are hybrid vehicles, and note that this doesn't even include the plug-in hybrid version of the RAV4, which is called the RAV4 Prime. For the purposes of this overview, only the traditional and hybrid versions of the RAV4 will be discussed.

One option is offered with the Nissan Rogue. As a 1.5-liter engine, it's on the smaller side of the spectrum, but it does benefit from having a turbocharger. It's able to make 201 horsepower and 225 pound-feet of torque.

Nissan matches this engine with a continuously variable transmission. Manual mode is offered as part of this system, and if a driver wishes to exercise more control, he or she can use the paddle shifters mounted on the steering wheel. The two driving modes that are available with front-wheel-drive Rogues are Eco and Sport modes. If the Rogue has all-wheel drive, it would also have Snow and Off-Road modes.

The traditional RAV4 runs on a 2.5-liter engine. It has four cylinders and can make 203 horsepower and 184 pound-feet of torque. These numbers are within the same range as those of the Rogue; the RAV4 has a touch more horsepower but a less torque.

Toyota has selected an eight-speed electronically controlled automatic transmission to go with the 2.5-liter engine. It has a sequential shift mode, and it, too, can be paired with front-wheel or all-wheel drive. Like the Rogue, the RAV4 has Sport and Eco modes in case a driver wants to change things up a bit. If it has all-wheel drive, it would come with Multi-Terrain Select, a program that lets drivers choose between mud and sand, rock and dirt, snow, and normal drive modes.

The other option is a hybrid system. It also uses a 2.5-liter engine, but there's an electric motor as well. The two components cooperate to make a net horsepower of 219. The hybrid RAV4 comes standard with an electronically controlled continuously variable transmission and all-wheel capability, and it has EV and Trail drive modes in addition to the other modes.

It's important to mention that out of the many RAV4 trims, a few of them are better suited for rugged terrain. The Adventure can do better in slippery conditions since it has dynamic torque vectoring all-wheel drive. The TRD Off-Road also has that type of all-wheel-drive system, and it has TRD-tuned suspension. Plus, the Hybrid SE and Hybrid XSE show enhanced handling, thanks to sport-tuned suspension.

These two SUVs are capable of towing smaller trailers, but they certainly can't handle anything that's too big. The Rogue can tow up to 1,350 pounds. The RAV4 does a little better in this regard, having a towing capacity of either 1,500 or 1,750 pounds. It's actually the hybrid version that has the higher towing capacity.

These vehicles look similar from the outside, and when sitting inside the cabin, they offer experiences that aren't too different from each other. The Rogue is about three inches longer but is slightly less wide and tall. Most people wouldn't be able to notice this discrepancy at all. With a size that's not too big or bulky, these SUVs can fit easily in parking spots. While they can be perfectly comfortable in more open areas, they are suited for urban driving and can be easily maneuvered around tight spots.

Though it has a touch less space for the passengers, the RAV4 has a little more cargo room in the back. Behind its rear seats, it has a cargo volume of 37.5 cubic feet. In comparison, the Rogue has 36.5 cubic feet of space back there.

Of course, other factors influence the overall driving experience. It's important that people can stay comfortable, and these days, technology plays a key role.

The Rogue takes care of its passengers. Many trims have dual-zone or tri-zone automatic climate control, and rear air vents are standard. The rear doors can even come with sunshades to keep things cooler in the back. Remote engine start is found on select trims, and doing this can start up the climate system so that the cabin can be comfortable before people start getting in. Higher trims have heated front seats, and they could also have heated rear seats and heated steering wheels.

Most trims of the RAV4 are fairly comparable to those of the Rogue. However, the higher Toyota trims can feature heated and ventilated front seats. Toyota doesn't offer rear sunshades, though.

Another minor difference has to do with the moonroof. The Rogue is available with a dual panel panoramic moonroof. With the RAV4, select trims have a regular moonroof and some others can have a panoramic moonroof with a front section that can tilt and slide open. Having that moonroof really elevates the experience for certain people who love the idea of having the sun shine on them and having fresh air fill their cabins.

In terms of technology, both of these models are impressive. Nissan has equipped the Rogue with Apple CarPlay, Android Auto, and Bluetooth. The trims either have eight-inch or nine-inch touchscreens, with the larger touchscreen coming with navigation. Voice recognition and a hands-free text messaging assistant are standard, so it's easy to keep one's hands on the wheel while interacting with the infotainment system. Wi-Fi connectivity is standard, and so is SiriusXM. Some trims can have Bose premium audios systems to enhance the sound quality.

Since it's very likely that multiple devices will be in the cabin at the same time, Nissan gave the Rogue more than one charging port. It comes standard with two ports, and it can have two others on top of that. It can also have wireless charging.

The RAV4 starts out with a seven-inch touchscreen, which is smaller than what the Rogue has. On the other end of the lineup, though, it has a nine-inch touchscreen. Like the Rogue, the RAV4 has smartphone compatibility, SiriusXM, and Bluetooth. It also has Amazon Alexa, which can be really convenient. Not all of its trims have Wi-Fi capability, but many do. Its higher trims have integrated navigation and 11 JBL speakers.

A wireless smartphone charging pad is available on the RAV4. This can eliminate the need for having so many cords cluttering the front console area. Lower trims start out with three total USB ports, and higher trims have five total USB ports so that no one has to compete for them.

Toyota and Nissan both do very well in the field of safety. The two companies have given these SUVs plenty of driver-assist technologies. This allows the vehicles to play active roles in protecting their passengers, and it gives them an edge in a competitive market.

The basic safety packages for both vehicles are quite comprehensive. They have adaptive cruise control, frontal collision warning, automatic emergency braking, and lane departure warning. These vehicles can also correct steering to keep themselves centered in their lanes.

There are some distinctions between what these SUVS can do. First of all, the Rogue comes standard with blind spot monitoring, rear cross traffic alert, and reverse automatic braking. The RAV4's base trim can be upgraded with blind-spot and rear cross traffic monitoring, but these aren't standard. Further, reverse automatic braking is part of the parking assist feature on the RAV4, but that's only included with select trims.

However, the RAV4 has something that the Rogue does not, and that's road sign assist. This program gives the vehicle the ability to read road signs, and it can then remind drivers of those signs. This is nice because drivers don't always see every speed limit sign and sometimes need to be reminded of upcoming traffic patterns.

Both models can be upgraded with 360-degree monitors to provide a greater perspective of what's around them. The adaptive cruise control program available on the Rogue is a bit more advanced than the one that the RAV4 has. That's because it can incorporate navigation data in determining when to slow down. The Rogue can also have intelligent lane intervention. This is a mitigation program that works together with blind spot monitoring to reduce the likelihood of certain types of accidents.

Value can be kind of subjective, but when it comes to vehicles, price is a major factor. When it comes to these two SUVs, though, it's really difficult to say which one has the best value.

The Rogue costs just about the same amount. Its entry-level trim has a starting price of a little more than $27,000. Its Platinum trim is the most premium one offered, and it costs about $38,500.

The Rogue is ever-so-slightly more expensive. While it doesn't have available ventilation in its front row like the RAV4 does, several trims have leather or quilted semi-aniline leather seats. The RAV4 is limited to having SofTex upholstery, which is a synthetic leather. Other high-end features can be found in the two models, such as heated side mirrors with turn signal indicators, hands-free lift gates, and navigation.

Again, these vehicles have so many things in common that it's hard to say whether one vehicle is better than the other. What needs to be taken into consideration is that the Rogue has slightly more advanced technology than the RAV4 does, except for not having Amazon Alexa. With its available leather seats, it does feel like the more refined vehicle.

In comparison, the RAV4 seems to be a bit more rugged, with a higher towing capacity and an available multi-terrain select feature. Since it's available as a hybrid, it's going to stand out amongst customers who want to make it a priority to be more eco-friendly. If anyone wants to go off-roading or push his or her vehicle to the limit, then the special trims of the RAV4 should definitely be considered over the Nissan Rogue.