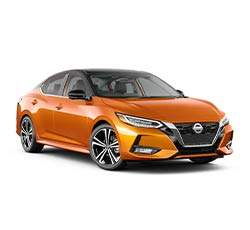 Compare the 2022 Nissan Sentra Trims - S vs SV vs SR and Midnight Edition. What is the difference between them?

If anyone is looking for a reliable, affordable, and practical sedan, the Nissan Sentra should be considered. This compact car feels modern in many ways, and it offers comfortable seating with various amenities. It might not be the most exciting choice available, but it doesn't have to be to do well in the market. The Sentra comes in four trims, giving it the ability to attract a wider variety of potential buyers.

Before comparing the Sentra trims, it's important to mention that they all have the same type of engine. It's a 2.0-liter engine with four cylinders that can make 149 horsepower and 146 pound-feet of torque. Front-wheel drive is standard, and the car uses a continuously variable transmission.

From a mechanical standpoint, the only thing that separates the SV from the S has to do with braking. The SV uses front vented and rear solid disc brakes. The S has those same type of front brakes, but it uses drum brakes for the rear wheels. It's widely accepted that disc brakes are superior to drum brakes, so this may be something that buyers want to take into consideration.

Both trims have 16-inch wheels. However, the ones on the S are steel and those on the SV are aluminum-alloy. Again, aluminum-alloy is the more premium material for wheels, so the SV definitely has the edge here. Plus, the SV is available with 17-inch wheels if anyone wants to upgrade.

There's only one other distinction between the exteriors of the S and the SV. The SV benefits from having heated outside mirrors. Having heat integrated into these mirrors can be very useful when the temperatures drop in the winter.

While it's not standard, a power moonroof is available on the SV. This may be something that intrigues certain buyers because of how much more open a cabin can feel when a moonroof is in place.

In the cabin of the S, things are functional and comfortable, if not that upscale. The S has cloth seats, and the front seats are manually adjustable. The driver's seat moves in six ways, and the front-passenger's seat can be adjusted in four ways. In the back, the seatback has a 60/40 split configuration. This provides some versatility in terms of carrying passengers and/or cargo.

In the SV, the seats are upgraded ever so slightly to have premium cloth instead of standard cloth upholstery. The steering wheel is wrapped in leather, too.

Then, there are a number of available features on the SV. They're actually pretty impressive, as they include heated front seats, a heated steering wheel, quilted leather seats, and a power-adjustable driver's seat with two-way power lumbar. Those who are considering treating themselves to something special may be intrigued by some of these opportunities.

Both trims have manual air conditioning systems, though the SV can be upgraded with dual-zone automatic climate control. The S has remote keyless entry with push-button start, both of which are very convenient. Nissan has given the SV an even more advanced intelligent key system. With this feature, a button on the key fob does not need to be pushed in order to unlock or lock the doors. Instead, the key fob needs to be in close proximity to the Nissan and the driver just needs to touch the door handle to lock or unlock it.

The company has done a great job integrating high-tech equipment into the Sentra. First of all, each trim has an advanced drive-assist display that shows the driver important data and information. This display measures 4.2 inches on the S and seven inches on the SV.

Further, all of the Sentras have large touchscreens with voice recognition, Apple CarPlay, Android Auto, and Bluetooth. The S has a seven-inch touchscreen, and the SV has an eight-inch touchscreen. The sound system on the S consists of four speakers, and the one on the SV has six. Notably, the SV's infotainment package, unlike the one in the S, includes SiriusXM Satellite Radio, which greatly expands the number of entertainment options when traveling.

Keeping devices charged is always important. The S provides one USB-A port. In contrast, the SV has two USB-A ports and one USB-C port. When passengers are riding in the Sentra with their own mobile devices, it's much more practical to have more than one port for charging.

In terms of keeping people safe, the Sentra is very well equipped. It comes standard with a full set of driver-assist technologies. Its safety package is more attractive than what's found on many competitors. It concludes forward collision warning, pedestrian detection, automatic emergency braking, lane departure warning, rear cross traffic alert, blind spot monitoring, rear sonar, and rear automatic braking. Those last few features, in particular, are not as commonly found on entry-level trims made by other manufacturers.

The one addition that the SV has is intelligent cruise control. This is a more advanced type of cruise control that can not only maintain a current speed if traffic is flowing consistently but can also adjust speed if the leading vehicle has slowed down.

Compare the SV vs SR Trims. What is the difference?

Moving to the SR results in having several more features. On the exterior of the SR, there are LED headlights instead of halogen ones, and there are LED signature Daytime Running Lights and LED fog lights. There's an option to get thin projector LED headlights that look even more sleek than the regular LED lights. The side mirrors are heated like the ones on the SV, but the SR's mirrors also have integrated LED turn signal indicators.

While the SV and S have chrome V-Motion grilles up front, the SR has a dark chrome version. It gives the car a more aggressive feel, and it goes along with the black side mirrors and body-color rear spoiler. Side sill extensions, a chrome exhaust finisher, and 18-inch aluminum-alloy wheels are also standard.

The cabin of the SR has been enhanced stylistically as well. It has sport cloth seat upholstery with a bright orange stitching for contrast. Note that it's available with Prima-Tex seats with that same orange stitching. Prima-Tex is a synthetic material that looks fairly luxurious.

Unfortunately, the SR does not have heated front seats, but they are available for an additional cost, just like they are on the SV. The SR does come standard with a leather-wrapped shift knob, a component that's only optional on the SV.

At the SR level, dual-zone climate control becomes standard. Remote engine start is standard, too, and this is very convenient when someone wants to cool down or heat up the cabin before getting in.

There are no differences between the standard infotainment packages on these two trims. The SR, though, does have a few available features for people to consider. They're actually pretty significant, as they are a Bose premium sound system, Wi-Fi capability, and NissanConnect Services.

Likewise, there are the same number of standard driver-assist programs on the SR as there are on the SV. This is positive news, since it means that both trims can do a great job of looking out for problems, keeping drivers area of various issues, and potentially being able to help take corrective measures. The only distinction is that the SR is available with an intelligent around view monitor. This may be useful when getting in and out of tight parking spots. A small car like the Sentra isn't likely to have too many issues with maneuvering, but having more eyes is always a good thing.

It may be worthwhile to quickly mention that the SR is not as efficient as the SV is. The difference is slight, but over time, the costs of requiring more fuel could add up. The SR can achieve an estimated 28/37 (city/highway) miles per gallon, while the SV earns an estimated 29/39 miles per gallon.

Compare the SR vs SR Midnight Edition. What is the difference?

A modest price jump is associated with the move from the SR to the SR Midnight Edition. Taking this into consideration, it's not a surprise that these trims have a lot in common with each other. They have the same general mechanics as well as very similar technology.

Other things that aren't available on the SR Midnight Edition are heated front seats, Prima-Tex seats, a power-adjustable driver's seat, and a heated steering wheel. In an interesting move, Nissan has also taken away the opportunity to upgrade the Midnight Edition with a premium sound system, all-around view monitor, and Wi-Fi capability. Basically, consumers will have to choose whether they like the dark appearance on the Midnight Edition or whether they prefer something less edgy and want to be able to purchase some upgrades.

Most of those components that were just mentioned as being only available on the SR come as part of the Premium Package. It costs approximately $2,500, and it adds to the exterior and interior of the Sentra. Some of its features include the moonroof, thin projector LED headlights, power-adjustable driver's seat, heated steering wheel, and Wi-Fi hotspot.

Every one of the 2022 Nissan Sentra trims can be considered inexpensive. The S is priced under $20,000 which is hard to do these days. The SV costs a touch more than $20,000, and the SR and SR Midnight Edition are a few thousand dollars more expensive than the SV. From a budget perspective, these trims are all very close to each other.

Given the relative affordability of the SR, this trim is worth its price. It looks nicer than the other versions of the Sentra, as it has bigger wheels, better exterior lighting, and nicer accents like the spoiler and side sill extensions. Inside its cabin, it has a more advanced climate system and more stylish seats. It can be enhanced with even more features, and those who have more elegant tastes can take advantage of these. This pushes the Sentra more in line with more expensive models that have all-around monitors, heated front seats, and power-adjustable driver's seats.

However, all of these things can add up to make the SR a bit too much for some buyers. If it's the case that a buyer really needs to watch his or her spending, then honestly the S would be perfectly fine. Many will appreciate that it has driver-assist technologies, a digital instrument cluster, and a seven-inch touchscreen with Bluetooth and smartphone compatibility. Some won't even care that it doesn't have LED headlights or premium cloth seats.