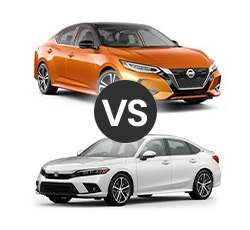 Small sedans do not work for every driver, but they are perfect for those who do not need a lot of cargo or passenger space. These vehicles are efficient and can be quite fun to drive. While sedans are not as popular as they once were, there are a few options that have managed to hang on over the years.

The 2022 Honda Civic is the first year of the eleventh generation of this vehicle. For many years, it has been considered the small sedan to beat. Buyers can get this vehicle as a hatchback, further expanding its versatility and appeal in many cases. The 2022 Nissan Sentra is in its eighth generation, proving its long-lasting popularity as well.

Buyers who are after a small commuter vehicle will likely consider both the 2022 Civic and the 2022 Sentra. These vehicles have similar strengths and weaknesses, but they also have some key differences to be aware of.

The Sentra is available in three trim levels in 2022, all of which are powered by a four-cylinder engine. It creates 149-horsepower and 146 lb-ft of torque. Mated to this engine is a continuously variable transmission. This is an adequate amount of power, but it certainly would not be described as thrilling.

There are more powertrain options when buyers choose the new Civic. Its base engine is a 2.0L four-cylinder that creates 158-horsepower and 138 lb-ft of torque. Like the Sentra, the base Civic engine has a continuously variable transmission. For the EX trim up, the Civic goes with a turbo 1.5L four-cylinder that makes 180-horsepower and 177 lb-ft of torque. This engine provides a much more enjoyable drive.

Finally, drivers can choose the Civic Si. This is a performance-oriented model that utilizes an upgraded version of the turbo 1.5L, and it can pump out 200-horsepower and 192 lb-ft of torque. It has a six-speed manual transmission and a sport-tuned suspension. This version also has larger brakes than other Civic models and a limited-slip front differential.

The new Nissan Sentra is pleasant to drive. Well-weighted steering and strong brakes give drivers confidence at the wheel. It is ultimately a lack of feedback that prevents the Sentra from being described as athletic, however. This is not the case for the Civic, which is one of the most enjoyable sedans to drive out there. It has a balanced ride while providing drivers with an engaging experience at the wheel.

If buyers are concerned about how many grocery bags they can fit in their new sedan, they should be aware that the Sentra has 14.3 cubic feet in the trunk. That is slightly below average, while the Civic has nearly 15 cubic feet. For even more room, buyers can go with the Civic hatchback, which offers 24.5 cubic feet behind its second row.

When it comes to the standard infotainment system, the base Civic and the base Sentra are pretty much identical. Both come with a 7-inch touchscreen, Bluetooth, Android Auto, and Apple CarPlay. They both also have a single USB port and a four-speaker sound system.

As buyers compare available upgrades, however, the Civic becomes more impressive. It can be equipped with a 9-inch touchscreen, for example, while the Sentra goes up to an 8-inch one. The Civic is also available with a digital instrument panel and the wireless versions of Android Auto and Apple CarPlay. Neither of those upgrades is available on the Sentra. Both of the vehicles offer a Wi-Fi hotspot and extra USB ports, plus satellite radio.

Buyers can upgrade their Sentra to an eight-speaker sound system from Bose. The Civic, on the other hand, can upgrade to a 12-speaker setup by Bose instead. Wireless device charging is also available on select Civic models.

Naturally, an infotainment system is only impressive if buyers can actually use it. Critics point out that the Sentra's setup is not user-friendly. There is a considerable amount of lag when trying to use the touch controls, and the physical controls make things more complicated than necessary. The graphics are also getting a bit outdated. The Civic has an infotainment system that is much easier to learn and use.

When comparing the interior quality of these two vehicles, the Civic is again the winner. It was redesigned for 2022, and it no longer feels dull. The new Civic uses upscale materials and feels well made overall. As for the Sentra, it feels sturdy, but it lacks the sophistication that the Civic has.

The most fully-loaded Sentra SR is available with an additional package that adds a sunroof, a power-adjustable driver's seat, and synthetic leather upholstery. As for the top Civic trim, it is home to genuine leather upholstery, an auto-dimming rearview mirror, and power-adjustable front seats. No additional package is needed to get these features on the Civic Touring.

Both the Sentra and the Civic are meant to seat up to five. They both have supportive and comfortable front seats and adequately spacious rear seats. Taller occupants may not enjoy the back of the Sentra, however, due to its lack of headroom. While the redesign of the Civic did not change the amount of passenger space it had in the sedan, the new hatchback design gives rear passengers a bit more legroom.

Buyers can compare the safety scores from the Insurance Institute for Highway Safety for the 2022 Sentra and the 2022 Civic. Both of these vehicles received the top score of "Good" in all six of the main testing categories. The 2022 Civic has been named a "Top Safety Pick+." As for the Sentra, it is held back by its headlights. Only the Sentra SR with the available feature package has been named a "Top Safety Pick."

The Sentra has fewer standard driver aids than the Civic, but it does cover the most important bases. Buyers get a forward-collision warning, lane departure warning, blind-spot monitoring, and pedestrian detection. Forward and reverse automatic emergency braking can be found on the standard feature list, plus driver drowsiness monitoring.

As for the Civic, it does not come standard with blind-spot monitoring. It makes up for this by including adaptive cruise control, road departure mitigation, automatic high beams, and traffic sign recognition. A rear-seat reminder is also standard for the 2022 Civic.

There are not very many extra driver aids available for the Sentra. Buyers can get this sedan with adaptive cruise control or a surround-view camera system. As for the Civic, it offers blind-spot monitoring, rain-sensing windshield wipers, rear cross-traffic alert, and both front and rear parking sensors. Interestingly, a surround-view camera system is not available.

The 2022 Sentra has a starting price of $19,500. This is considered typical for the class. If buyers seek the top trim level, they will be looking at $22,100. This is a low number for a top trim, but the Sentra leaves a lot of items available instead of standard.

When looking at the new Civic, buyers will find the starting price for the entry-level sedan is $21,700. This is a bit high compared to rivals. The hatchback is even more expensive, starting out at $22,900. Buyers can expect to pay around $28,300 for the top sedan trim and $29,400 for the top hatchback.

Buyers should now move on to the projected costs of owning both of these vehicles. The following information is based on the entry-level Sentra and the entry-level Civic sedan. All of the numbers are based on the assumption that the vehicle is driven around 15,000 miles per year.

The first thing that many shoppers will want to compare is depreciation. The Sentra will lose roughly $12,300 in value over the course of years. Choosing the Civic will mean losing roughly $12,600. While the Sentra technically holds its value better, the Civic wins in most other categories.

One easy way to compare how much these vehicles will cost is to look at how much each will cost to drive per mile. The 2022 Sentra is estimated to cost $0.44 per mile, while the Civic will only cost around $0.41 per mile.

It is easy to see why buyers would be drawn to both of these vehicles. They are both relatively efficient, and they both have an attractive number of standard safety features. Making the right choice will ultimately come down to priorities.

For some people, the lower price tag will make the Sentra a better choice. It may cost more per mile to drive, but the down payment and monthly payments will likely be lower. The Sentra also comes standard with blind-spot monitoring, which is a popular drive aid.

Many drivers will find the 2022 Civic to be preferable, however. It has more cargo space, more engaging powertrain options, and a more upscale interior. The extra fuel efficiency is a bonus, and it has more sophisticated technology features to explore on higher trim levels. The redesign of the Civic for 2022 has helped give it a modern edge over most of its competitors.

Shoppers who are after an affordable sedan to get them around town should consider the 2022 Nissan Sentra, while those who are after a bit more luxury and convenience should test drive the 2022 Honda Civic.