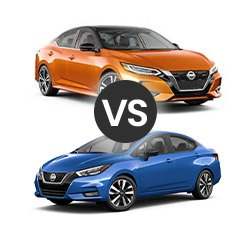 2022 Sentra vs Versa - How Do They Stack Up? What are the differences?

Folks in the market for a budget-friendly car should take a look at what Nissan has to offer. Like the 2022 Nissan Sentra, the 2022 Nissan Versa has an affordable price tag. While the subcompact Versa is accommodating enough for most drivers, others will prefer the larger Sentra.

Both of these sedans are highly recommended for daily commuting. They are comfortable and good on gas. Owners also won’t have to spend a ton of money on annual maintenance. However, which model is the best option for today’s car shoppers? Keep reading to learn more about how the Sentra compares to the Versa.

The 2022 Nissan Sentra is the larger of these two sedans. It’s roughly 5.0 inches longer and 3.0 inches wider than the 2022 Nissan Versa. City dwellers may appreciate the Versa’s more compact design when squeezing into tighter spaces.

While the Versa is an attractive economy car, the Sentra looks a bit more upscale overall. An available black roof gives it a two-tone theme. Nissan also offers a cool Midnight Edition version of the Sentra, which adds blacked-out treatments.

Despite its smaller stature, the Nissan Versa gives drivers ample space to uncoil. It provides an impressive 44.5 inches of front legroom. This means even tall drivers can easily fit behind the wheel without feeling cramped.

Unfortunately, there’s not a great deal of space in the Versa’s backseat. It only offers 31 inches of rear legroom. This could be an issue for drivers who often travel with teenagers and adults.

Like its smaller sibling, the Nissan Sentra ranks among the best cars in its class for tall drivers. There’s roughly 44 inches of legroom in the front. Backseat passengers can also take advantage of the Sentra’s extra 3.7 inches of rear legroom.

Visibility through the Sentra’s front windshield is good. However, a sloping roofline and broad rear roof pillars hinder visibility when glancing back. Many test drivers describe the Versa’s outward visibility as being fantastic. It has fewer rear blind spots than the sleeker Sentra.

When it comes to trunk space, these cars are closely matched. The Sentra’s 14.3 cubic feet of cargo space will satisfy most commuters. By comparison, there’s 14.7 cargo space in the Versa’s trunk.

Nissan decided to only offer the current-generation Sentra with a single powertrain. It uses a naturally aspirated four-cylinder engine, which presses out 149 horsepower. Although Nissan’s Xtronic continuously variable transmission may not feel as engaging as a traditional automatic transmission, it operates smoothly without any hiccups. This gearless transmission’s biggest priority is minimizing fuel consumption.

From a performance standpoint, the 2022 Nissan Sentra is a step behind some competitors. Nevertheless, it feels spirited enough for most drivers. Road tests show the Sentra clocks a sufficient 0-60 mph time of 8.5 seconds. Sentra drivers should have no trouble keeping pace with the flow of traffic.

The 2022 Nissan Versa also only gives car shoppers one engine to choose from. It comes equipped with an even smaller 1.6-liter, four-cylinder engine. Nissan tunes this engine to push out 122 hp. Power is sent to the wheels through the automaker’s Xtronic continuously variable transmission.

In contrast to the Sentra, the Versa does give buyers access to a five-speed manual transmission. Folks who choose the manual gearbox will be rewarded with a sportier driving feel. Acceleration will be a touch quicker.

Drivers should not expect the Versa to feel as responsive as the Sentra. This subcompact sedan takes its time getting up speed. During performance testing, the Versa recorded a 0-60 mph time of 9.7 seconds. When merging onto a quick-moving freeway, drivers will need to really step on the gas.

The Sentra is a rather fuel-efficient automobile. According to the federal government’s estimates, drivers can anticipate getting up to 29 mpg in city traffic and 39 mpg on the open highway. Regular gasoline is the recommended fuel type.

Drivers who live in urban areas can take advantage of the Versa’s higher city fuel economy estimates. It has a rating of 32 mpg town/40 mpg freeway. Choosing the Versa’s standard manual gearbox reduces this rating to 27 mpg town/35 mpg freeway.

Both of these cars feature a front-wheel-drive system. They will perform well in most conditions, including rainy weather. However, the lack of an optional AWD system compromises traction on snowy streets.

The Sentra’s impressive road handling makes it a satisfying daily-driver. It comes standard with Intelligent Trace Control. This system enhances stability around curves by applying light braking force to the inside wheel when necessary. Another highlight is the Sentra’s more sophisticated multi-link rear suspension, which makes it more agile than some of today’s other compact sedans.

While the Versa is not quite as interesting to drive, it’s an ideal car for running errands and commuting. The Versa remains composed in virtually every driving situation. Accurate steering further enhances this subcompact car’s effortless driving experience.

Passengers will enjoy the Sentra’s bump-free ride. When encountering washboard road surfaces, Nissan’s Active Ride Control system helps smooth things out. While the Versa can feel bouncier on old roads, it remains comfortable on the majority of surfaces.

Most Sentra trims come equipped with upgraded rear disc brakes. Unfortunately, this sedan’s braking performance doesn’t rank among the class leaders. It recorded a 60-0 mph braking distance of around 131 feet, which is below average for the class.

Despite having cheaper drum brakes on the rear, the Versa actually stops quicker than the Versa. When braking at 60 mph, it took the Versa 124 feet to come to a complete halt.

Both of these Nissan models allow some wind noise to creep into the cabin at freeway speeds. However, the Sentra’s ride is a tad quieter. According to some testers, the Versa can produce a thumping sound when hitting bumps in the road.

Despite being an inexpensive commuter car, the 2022 Nissan Versa offers a comfortable driving experience. Nissan’s standard “Zero Gravity” front seats are particularly relaxing. By keeping the spine in a natural position, these specially designed seats help lessen the amount of stress placed on the body. Nissan also equips the Sentra with these fatigue-reducing seats.

Both cars come equipped with a flat-bottom steering wheel. Not only does this feature give the cockpit a sportier feel, but it also frees up a bit more space for the driver's knees.

Like the Sentra, the Versa can be upgraded with heated from seats. However, only the more upscale Sentra offers a heated steering wheel and two-zone automatic temperature control. Available quilted leather seats give the Sentra an even more luxurious character.

With the Versa being more of an economy model, it does not offer certain upgrades. In terms of sound quality, the Versa’s available six-speaker unit is a step below the Sentra’s available eight-speaker Bose premium audio system. While the Sentra gives buyers access to a built-in Wi-Fi hotspot, this feature is not found on the Versa’s list of options.

Stamped with a starting MSRP of $19,950, the 2022 Nissan Sentra is definitely affordable. It’s considered to be a strong value. However, budget-minded drivers will find the 2022 Nissan Versa to be even more appealing. Prices for the base Versa begin at an inexpensive $15,580.

Only the Sentra comes standard with blind-spot monitoring, which is one of today’s most sought-after safety technologies. To get blind-spot monitoring, Versa buyers must step up to a higher trim level. While driver drowsiness monitoring can be added to the Versa, it’s on the Sentra’s list of standard equipment. The same is true for Rear Door Alert, which makes children and pets less likely to be left behind in a hot vehicle.

Intelligent cruise control is offered on both models. This system helps lower the driver's stress levels by maintaining a secure following distance and adjusting the car’s speed when necessary.

While both sedans come standard with a traditional backup camera, Nissan’s Around View Monitor system is an option of the Sentra SR. It features a total of four cameras, thus allowing drivers to obtain a 360-degree view. Moving Object Detection is built into the system.

Cost will be a deciding factor for some people. The 2022 Nissan Versa is among America’s most affordable commuter cars. By choosing the Versa over the Sentra, car shoppers have the potential to save more than $4,300. However, most people will still consider the 2022 Nissan Sentra to be a strong value. Unlike the Versa, it comes standard with advanced smartphone connectivity and a few additional safety technologies.

Neither car is designed to offer a thrilling performance. Nevertheless, the Sentra will be more entertaining to drive. Its stronger punch under the hood and enhanced handling capabilities will win over some people. Furthermore, the Sentra is nearly just as efficient as the Versa. One of the Versa’s advantages is its available manual transmission, which is more stimulating than Nissan’s continuously variable automatic transmission.

The Sentra is comfortable to drive on a daily basis. However, a tighter backseat makes it less suitable for folks who need to accommodate adult-sized passengers. Six-footers can fit in the Sentra’s rear seat. Premium amenities that are exclusively available on the Sentra include quilted leather seating surfaces, a heated steering wheel, a 360-degree camera system, and a Bose sound system.

Styling is subjective. However, drivers seeking a sportier look will likely lean towards the Sentra. It’s a bit bolder than the Versa. Nissan also offers the Sentra with a blacked-out Midnight Edition appearance package and a contrasting black roof.