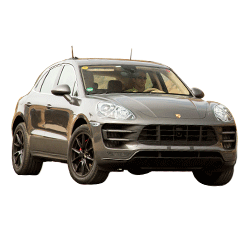 Should You Buy a 2015 Porsche Macan? Here Are Some Reasons For and Against

Although Porsche is best known as the producer of high-powered sports cars with world-beating performance right from the factory, the company's best-selling model today is actually its Cayenne luxury SUV. It is only natural, then, that Porsche would expand its model line to include a second SUV model, the more-compact and even sportier 2015 Macan.

Part of a fast-growing segment of small luxury crossovers and SUVs that also includes the BMW X3 and the Audi Q5, the Macan storms onto the worldwide scene with power and driving performance even those German vehicles cannot match. The Macan is an all-new addition to the Porsche lineup for the 2015 model year.

The Macan's two available engines come derived from new Porsche V-6 engines related found in the Cayenne and the Panamera four-door coupe. The base Macan S makes 340 horsepower from a 3.0-liter direct-injection V-6, while the upscale Macan Turbo outputs a full 400 horses from a twin-turbocharged and direct-injected 3.6-liter V-6.

2. Lightning-quick shifts from a PDK transmission.

Like other Porsche models, the Macan sports Porsche's newest-generation Porsche Doppelkupplungsgetriebe (PDK) sequential manual transmission with paddle shifters and an automatic shift mode. The dual-clutch PDK system can shift through the car's 7 gears faster than even the most well-trained driver with a traditional three-pedal manual. When in automatic mode, the transmission can be set to much more relaxed settings for driving through town.

3. Best straight-line performance in the segment.

Regardless of engine choice, the Macan just plain out-hustles any of the compact luxury segment's other entries. The Macan S accelerates from 0 to 60 mph in around 5.6 seconds, while the Macan Turbo does the same sprint in just 4.4 seconds.

With standard AWD packing a torque-vectoring rear differential, the Macan is still most at home on paved roads and racetracks despite its tall ride height and boxy SUV styling. Although Porsche's latest shares some of its structural bones with its corporate sibling the Audi Q5, Porsche has made sure its vehicle is sufficiently differentiated thanks to its fully independent air suspension with active dampers. In Car and Driver testing, the Turbo model's skidpad figure of 0.89 g places it closer to six-figure sports cars than the typical SUV.

Starting with its shapely, power-domed hood and adaptive bi-xenon headlamps and moving back toward its fastback roofline, the Macan shows shades of both its bigger brother the Cayenne and the 911 sports car. Its low ride height looks more akin to a lifted hatchback than a traditional body-on-frame SUV, while its huge fender flares hint at the advanced AWD system lurking just beneath its skin.

Many Macan shoppers would probably buy a 911 or a Cayman if they were a bit younger, single and did not need a serviceable rear seat. For all its performance, the compact SUV also offers a surprising degree of practicality thanks to enough space for 6-footers for shorter trips in the rear outboard seating positions and even up to 53.0 cubic feet of cargo space with the rear seat folded flat.

The Macan's interior has been designed in a simple, ergonomic layout that avoids the busy, haphazard look found in some competitors. Leather-and-Alcantara sport seats along with a power liftgate and a fully featured infotainment with Siri Eyes Free technology for iPhone users highlight a long list of standard and available features setting Macan apart as a true luxury car.

Even if a Macan owner never strays far from soccer practice and the Starbucks drive-through, the car offers a certain air of exclusivity that only German luxury cars can offer. Its styling is instantly recognizable as a Porsche, and the Turbo model with its 21-inch wheels and Sport Chrono Package stands out, even in markets like Los Angeles where seeing a 911 is as common as seeing the sun rise.

As an all-new model for 2015, the Macan should appeal to buyers who like to stay ahead of the Joneses with the hottest, newest product on the market. Seeing the vehicle in the flesh is still a rare treat, even though early sales results have been rock-solid. Some of that freshness will wear off a couple years down the line, but for now, the Macan is a hot commodity.

Porsche's V-6 engines as found in the Panamera and Cayenne and its PDK transmissions have earned excellent marks for their long-term durability with little maintenance other than keeping oil and fluids fresh. That well-deserved accolade is expected to extend to the Macan as well. Porsche models are so over-engineered in order to attain their sporting performance that they tend to stand the test of time surprisingly well.

At $49,990 to start and a full $72,300 for the Turbo model even before a trip to the options sheet, the Macan is quite expensive when compared with its segment competitors. Owners who will just be using the SUV as an around-town car may not want to pay a high premium for breathtaking performance.

Even though the available self-leveling air suspension goes a long way toward improving the Macan's comfort, this is still a tightly sprung, sport-focused SUV that may be too rough for some buyers' tastes, especially over cracked payment. Much cheaper options like the Acura RDX are smoother-riding.

The Macan's compact exterior dimensions may be seen as a virtue or a drawback depending on what an individual buyer's needs are. With seating for 5 and a relatively spacious cargo hold, the Macan still lacks a third row and enough cargo space inside for a family to take a long vacation.

In addition to the aforementioned BMW X3, Audi Q5 and Acura RDX, the Macan's top competitors include the Lexus NX and RX, the Infiniti QX60 and the Cadillac SRX. None of these models can match the Macan's performance, but all are priced lower, especially after considering Porsche's notoriously expensive option book.

For buyers who wish they could get away with driving a pure sports car but need SUV practicality, the Macan truly offers the best of both worlds. Its raw performance exceeds that of other small SUVs and approaches hardcore sports cars, although its cost and compact exterior dimensions may be limiting factors to its appeal.
Featured Buying Guides: