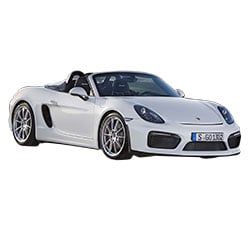 Should You Buy a 2016 Porsche Boxter? Here Are Some Reasons For and Against

After the success of the 2015 Porsche Boxster, one can only expect the next model to be even more supreme on the road. The same EPA efficiency should be maintained or taken a notch higher; the design sleeker, a spoiler upgrade, a new streamlined on the body—there is so much anticipation on the new features to come. Will the 2016 Boxster give the same satisfactory performance as its 2015 predecessor?

For a comparison review, the Porsche Boxster is going to compete with its sibling, the Porsche Cayman 2016, equally a luxury sports car. A big difference in exterior features is that the Boxster will don a convertible roof while the Cayman is non-convertible. The real competition will be under the hood, which the consumer is about to find out.

There is a definite tie-in fuel efficiency between the two sports luxury cars. The 2016 Boxster manages an EPA rating of 22 city cruising and 32 when speeding on highways. Looking at their 2015 models, EPA has been maintained constant, so the consumer is bound to be happy that this new machine will provide the same level of fuel efficiency.

From the horse’s mouth, the 2016 Boxster is set to be the fastest car to be created by Porsche. The nimble mid-engine will rev at horsepower levels of 265, which is quite high compared to the 2016 GTS trim but quite low compared to the 275 hp the Cayman will so effortlessly achieve. It makes one wonder why the 2016 Boxster took the “Fastest Porsche Car” title, but perhaps there is more under the hood.

Given that the Boxster is a convertible, there is some significant amount of weight shed off. Porsche says they trimmed off about 66 lbs from the 2015 model, making it more feathery compared to the Cayman. With a light body comes the advantage of picking speed fast, so perhaps this is where the Boxster will outwit the Cayman.

The consumer still gets a manual shift gearbox that test drivers say has impressive athletic handling. The 6 Speed manual will be revving power through a six cylinder engine, meaning more power to boosts insane speeds on the highway. The shifts from one gear to the other are well timed which is what every driver wants in their sports car. The same can be said about the Cayman; 6 speed manual with great shifts though the thrill should be felt more on the Boxster due to its less bulky body.

Porsche did some justice to both sports cars regarding the body design. Nonetheless, comparing the vehicles side by side, the consumer is more likely to fall in love with the Boxster. It looks smoother with a tiny spoiler at the back that accentuates the cuteness. Moreover, it will almost look similar to the Cayman once the roof covers the top, so why not prefer the roofless option once a while?

When the roof goes missing, it leaves behind a luxurious interior designed for comfort and fun. Like its predecessor, the Porsche Boxster 2016 will be a two-seater luxury sports car, with seats crafted from high-quality leather and silky velvet covering. The head rest dons leather, and the armrest will have a velvet highlight as well. The seats are height adjustable and two-way powered. There is plenty of leg room and an adjustable steering wheel for maximum comfort while driving.

The 2016 Porsche Boxster will have automatic cruise control features and electric power steering. The in-built universal transmitter allows the driver to open their garage door or trigger their home security system to open the gate. Additional perks the Porsche would enjoy include:

The passenger seat is fitted with child seat anchors to keep the baby safe while driving. To minimize the possibility of accidents occurring, the sports car is fitted with automatic brake assist and engine immobilizer features. It has in-built traction and stability control properties, which explains its minimal body lean when negotiating tight corners at high speeds. In case of collision, the sports luxury car has front side-mount airbags and head airbags to protect both passengers. The vehicle is compact enough to fit in tight spots and has front and rear reversing cameras to help the driver park accurately. Extra safety measures include:

The Porsche 2016 Boxster has four front speakers that project sound harmoniously from the AM-FM radio or the auxiliary audio port. The stereo has a 500-watt output power and additional Bluetooth technology for wireless connections.

The starting price for the 2016 Porsche Boxster will be approximately $51,000 on the market. It will be the same price range consumer bought the 2015 model for; thus, there is the delight of enjoying more speed and power for the same price. The Porsche Cayman will start off at $52,000; quite pricy given there isn’t that much pizzazz about it in terms of features.

There is no CD changer or Satellite radio, which are just a few of the missing entertainment features the consumer is likely to complain about.

The Porsche Cayman trumps it on horsepower, despite the claims that it is the most powerful Porsche model ever made.

The Porsche Boxster 2016 still has a six speed manual transmission gear box. This can be quite disappointing for the consumer who hoped for a seven-speed transmission that will be an optional feature that will require extra dollars on the retail price.

The Porsche Boxster 2016 is a worthy upgrade given that it looks more stylishly designed with a few pounds shed off to make it lighter. Despite the minor drawbacks, it will be the most powerful and fast luxury sports car Porsche has ever made.
2016 Porsche Buying Guides: