2015 Subaru Forester Pros vs Cons. Should You Buy? 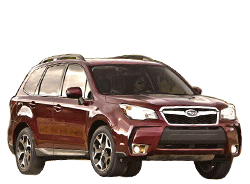 Should You Buy a 2015 Subaru Forester? Here Are Some Reasons For and Against

The Subaru Forester is an attractive option for drivers who need space and versatility but don't want a full size SUV. Especially for the outdoorsy set, it's a great crossover option--it was rated #6 in the affordable compact SUVs category by US News and World Report and #5 in the Crossover Category from Kelly Blue Book.

After a redesign in 2014, the 2015 Forester is a little roomier, with more seating and storage space. There are also a few minor differences in the trim and some new options available. It remains a good purchase for many of the reasons past models have been: it's practical, multipurpose, gets decent mileage and is offered at a fair price point. Here are a few of the pros and cons of the 2015 Forester.

Top Ten Reasons to Buy a 2015 Subaru Forester - the Pros

For anyone who regularly needs to drive in rough terrain or winter weather, the Forester's symmetrical all wheel drive is a major draw. Re-engineered suspension and nearly 9 inches of ground clearance also make this vehicle a good choice for those who will do a lot of all-weather or off road driving. The higher trim models have additional features that allow for even better control in inclement weather.

The 2015 Forester comes loaded with safety features, some standard and some available at higher trims. Standard features include 4-wheel anti lock brakes, stability control, rear view camera and an array of airbags. At higher trims, safety options include the Eyesight: Driver Assist Technology, detailed below.

It's the wave of the future, and this year it got cheaper to include it. The price to add Subaru Eyesight: Driver Assist Technology has dropped $500 over last year. The award winning Subaru Eyesight uses front mounted cameras to put in place a range of safety checks that stop fender benders and major collisions in their tracks. The technology will warn drivers if they're swerving out of their lane and if there is a traffic obstruction. If needed, the technology will also apply the brakes. Eyesight also includes cruise control that will adapt to the flow of traffic around the vehicle.

The Forester has always performed well in crash tests, with the 2014 Forester chosen as an IIHS top safety pick plus. The 2015 model also aced its crash tests, coming in as one of the safest picks in the small SUV category.

As with the 2014 model, the 2015 Forester has ample room in the cabin and seats five. Reviewers are especially pleased with the amount of legroom in the rear seats--this is a great vehicle for families or others who will regularly be carrying a full carload of people or wrestling car seats in and out of the rear seats.

Priced from around $22,000 for the base model, the Forester is priced competitively against other vehicles in its class. Similar cars come in at around the same price or slightly higher--the 2015 Honda CR-V starts from $23,000, and Toyota's RAV-4 comes in at $23,500.

In addition to its ample cabin room, the Forester also has a good amount of cargo space for its compact size. While it's still not a full-size SUV, last year's redesign made the interior roomier and the rear seats also fold down for greater capacity. It's a good choice for people who need to carry lots of cargo but still want to keep their vehicle as compact as possible.

While the Forester is still an SUV and falls short of the best fuel economy, its MPG is still quite good for its class. The Forester gets 24 mpg in the city and 32 on the highway, making it very competitive in the compact SUV category.

For those who need to get there quickly, or who just want something fun to drive, the 2.0XT model comes with a two-liter, 250 horsepower turbocharged engine. Unfortunately for those who want zip and a gearshift, this model doesn't come with a standard transmission option.

When buying a car, it's always smart to look far into the future, and a Forester paints a pretty picture. Subaru has a historically good resale value, meaning that whenever the first owner of this vehicle is ready to move on, it's a safe bet that there will be a second owner lining up.

Reasons Not to Buy a 2015 Subaru Forester - the Cons

While the Forester gets all around good reviews, it's not perfect. Here are a few of the drawbacks and wrinkles that owners and reviewers have run into.

1.) No Option to Combine 2.0 Liter Option with Standard Transmission

It is a disappointment for some that the trubocharged model doesn't come combined with a standard transmission. Unfortunately for consumers who want both, it's either one or the other.

As with the 2014 model, owners and reviewers wish that the infotainment center had been improved. The onboard navigation system and entertainment system is reported to be clunky, outdated and difficult to use.

Overall, the Forester is a great option for anyone who needs space, fuel economy and off-road capabilities at a decent price point--it's a great all-around vehicle that is versatile and solid. Whether loading up the family for an outdoor expedition or packing the back with groceries, it can rise to the task at hand. The 2015 Forester is a very competitive entry in the small SUV category, holding its weight easily against other contenders like the Honda RAV-4 and the Mazda CX-5.