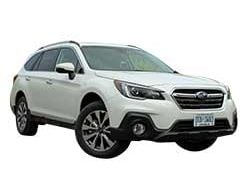 What 2018 Subaru Outback Trim Level Should you Buy? What is the Difference Between Trims?

Before the compact crossovers became all the rage, the Subaru Outback was already delivering all of the features that would later come to define the genre: a high seating position, large cargo and passenger areas, plenty of convenience features, and reliable all-wheel drive. While today’s Outback faces some competition from the newly-popular crossovers, it remains a popular choice with many customers.

Over the last decade, Subaru has refined its technologies, maximized its comfort, and has added plenty of new features to this long-running favorite. The 2017 Outback saw an addition of an extra trim level and new safety features, while this year’s model has an upgraded infotainment system and refreshed styling.

The 2018 Subaru Outback offers a number of customization options, including two engines, a solid selection of trim levels, and several different optional packages. These options cover the full range of styles and price ranges, from the base entry-level model to a near-luxury fully-equipped one.

This article includes a rundown of all of the most important features that each trim level brings, as well as some helpful information about choosing the trim level that best reflects your requirements.

The 2.5i model may be the most basic Outback available, but it can easily hold its own against some of the more mid-range entries from other automakers. It comes with a full set of standard power features, alloy wheels, the 2.5-liter four-cylinder engine, a continuously variable transmission and an all-wheel drive system.

The latter is one of the main draws of the Subaru Outback. Because of the unique powertrain design used by Subaru, almost all Subaru models including the Outback continuously deliver power to all four wheels of the car. This stands in contrast to the most common all-wheel drive systems used on cars and crossovers today, which typically function like front-wheel drive cars until they start losing traction. This makes Subaru’s system slightly more reliable, especially when facing mixed conditions like puddles or patches of ice.

The 2.5i Outback also comes with the StarLink multimedia system, which includes a 6.5-inch touchscreen with support for smartphone apps using Android Auto and Apple CarPlay. The smartphone integration support is a new addition to the technology this year. The basic Outback does not come with any other options or packages.

The 2.5i Premium adds some more comfort features to the base 2.5i shell. It comes with a dual-zone climate control and heated seats, as well as a driver’s side power adjustment. The StarLink infotainment system remains the same as on the 2.5i, but uses a slightly larger 8-inch screen instead and features a number of useful built-in apps. It also uses a six-speaker sound system instead of the four-speaker setup on the 2.5i.

The 2.5i Premium is also the most varied Outback trim level. It comes in either a standard model, or equipped with one of three optional packages. The moonroof package adds exactly what you would expect - a moonroof - as well as a powered liftgate. The EyeSight package also includes the power liftgate, but instead of a moonroof it has a set of active safety cameras that provide forward collision warnings, automatic emergency braking, lane departure warning, lane keep assist, automatic high beam assist, and a blind spot monitoring system with rear cross traffic alerts.

The third package is a combination of the two, including the liftgate, the EyeSight safety features and the moonroof, as well as throwing in a navigation system.

The 2.5i Outback is a solid and well-featured vehicle, though some buyers may choose the premium due to its inclusion of heated and powered seats. The real value on the Premium model comes from the EyeSight active safety suite. For many safety-conscious drivers, these advanced safety features are a must-have.

With the Outback already having a long-running reputation for safety and a customer base that considers it important, the Premium with EyeSight is one of the most popular choices from the Outback product line.

Compare the 2018 Subaru Outback 2.5i Premium vs 2.5i Limited Trims. What is the difference?

As is typical automotive convention, the L stands for Leather. The Subaru Outback Limited is the model that introduces standard leather upholstery. The interior accents also go more upmarket, with the silver-colored inlays replaced with wood grain ones. In addition to that, it adds a few of the optional features from the Premium as standard equipment and throws in some nice goodies of its own.

The moonroof and the power liftgate are standard on the Limited, as is the blind spot monitoring system. The rest of the EyeSight suite is part of the only optional package on the Limited, which also includes a navigation system, steering-linked headlights, and support for automatic pre-collision braking when reversing. In addition to those features, the Limited comes with heating for the rear seats, push button start, a power front passenger seat, and a premium Harman/Kardon audio system.

The Limited is the Outback to purchase if the leather trim is your preference, as most of the other features are convenience ones or available as options on the 2.5i Premium. Just as with the Premium, you can expect a large portion of the models to be equipped with the optional EyeSight package. It is also the better value option on the Limited, as the price difference is significantly smaller between an EyeSight-equipped Premium and Limited than between the base versions of the two models.

Compare the Outback 2.5i Limited vs 3.6R Limited Trims. What is the difference?

The Limited trim level is also the first one available with the optional 3.6-liter six-cylinder engine. Like the four-cylinder, it is a horizontally-opposed engine that constantly delivers power to all four wheels. It offers a solid boost over the 175 horsepower that the four-cylinder offers, raising the car’s total power output to 256 horsepower. It is slightly sprightlier than the four-cylinder when carrying only the driver, but really comes into its own when the Outback is loaded up with passengers and cargo.

It also raises the maximum tow rating to 2,700 lb, which significantly expands the Outback’s utility as a cargo hauler. In all other ways, including standard and optional equipment, this trim level is identical to the 2.5i Limited, though Subaru does officially consider it its own separate trim.

For most buyers, the six-cylinder option is probably overkill, as the base Subaru engine is enough for regular commuting and the occasional carpool. On the other hand, if you plan on frequently loading up your Outback with passengers, home improvement materials or heavy sports equipment, the additional heft of the six-cylinder may be helpful. However, with a slightly lower gas mileage and at a price of nearly $3,000 more, it is not a cheap option.

Compare the Outback 2.5i Limited vs 2.5i Touring Trims. What is the difference?

The Touring is the halo, all-in version of the Outback. It includes all of the standard and optional features of the lower trim levels, with the exception of the 3.6-liter engine. It also comes with its own set of visual upgrades, adding metal accents to the wood-grain trim of the Limited, brushed chrome exterior bits, fancy wheels, and a set of low-profile roof rails. It also comes with a heated steering wheel and unique leather upholstery options.

Aside from the heated steering wheel, there is no option on the Touring that is not available in lower trim levels for at least $2,000 less. In terms of value, there is not much recommending the Outback Touring. Its chief draw is its premium ambiance, which can easily compete with some of the luxury wagon entries and is reminiscent of the luxurious last-generation Eddie Bauer-edition Outbacks. If that is the look you are after, then the Touring is your model, but for most it offers little for the price.

Compare the 2018 Outback 2.5i Touring vs 3.6R Touring Trims. What is the difference?

The 3.6R Touring Subaru Outback has the same relationship to the 2.5i Touring that the 3.6R Limited has to its 2.5i equivalent: aside from the engine, they are exactly the same. Unlike most other automakers, Subaru has chosen to split off its six-cylinder models as their own trim levels rather than integrate engine choices as options within each trim, but don’t let that confuse you. The 3.6R Touring is just a 2.5i Touring with a different engine.

Despite being the highest trim level in the Outback lineup, the 3.6R Touring is slightly less attractive than either the 2.5i Touring or the 3.6R Limited. If your plans for your Outback include some heavy hauling or chauffeuring duties, the high-end trim of the Touring model is likely to see some serious wear and tear.

Conversely, the louder six-cylinder engine also detracts a little from the Touring’s luxury aesthetic. If you do want the luxury looks with the stronger engine, give the 3.6R Touring a try, but we recommend that you try either of the two alternatives as well to see if you may like them better.

The Subaru model line tends to prioritize concepts like safety, value and comfort over flashiness or high performance, and as its flagship the Outback excels in those categories across most of its range. The base 2.5i and the 2.5i Premium models offers some excellent values, especially when the latter is paired with one of its active safety optional packages.

Similarly, the Limited is a solid choice for anyone looking for a leather interior in their wagon, though be sure to include the optional safety features in your build as well. The Touring models and the six-cylinder engines are the only choices that are hard to unequivocally recommend, but could be the right selection for buyers looking for something more specific.

Save Money on a 2018 Subaru Outback:
Are you Shopping for a New Vehicle? Find the Best Deals with "Free - No Hassle" Prices Quotes.