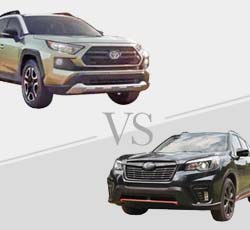 When it comes to buying a new SUV, the choice on what to purchase can be rough. Right now, the market is saturated with SUVs that are made in various sizes. The compact SUV segment is especially ripe with competition since it meshes power with fuel efficiency - something that bigger SUVs trade off for more power.

The 2019 Subaru Forester and Toyota RAV4 are two compacts SUVs that share a lot of similarities. Both offer some off-roading capabilities and offer a decent amount of cargo space. They are also loaded with a lot of standard safety and infotainment features.

However, they both have some pitfalls and notable differences from one another. The 2019 Subaru Forester and 2019 Toyota RAV4 are both decent vehicles, but which one presents the better deal? It is time to find out.

Power is something every driver wants to feel when they press on the gas pedal. Unfortunately, the 2019 Subaru Forester and 2019 Toyota RAV4 both feel under-powered for their class.

For starters, the Forester receives its power from a 2.5-L 4-cylinder engine that receives 182 hp and 176 lb-ft of torque. A continuously variable automatic transmission (CVT) and all-wheel drive come standard as well. In fact, this is the only powertrain option available in the 2019 line-up.

The CVT and 2.5-L make for something of an awkward pairing. They simply do not muster a whole lot of oomph when the vehicle needs to get up and go. It can only get from 0 to 60 mph in about 9.3 seconds, which is considerably slow for this class.

The RAV4 does a little bit better in terms of power. It comes with a standard 2.5-L 4-cylinder engine that was tweaked to gain more hp over the previous year's engine. The new 2.5-L gets 203 hp and 184 lb-ft of torque. An 8-speed automatic transmission is matched up with it. Front-wheel drive is the standard drivetrain on all trim levels aside from the off-road oriented Adventure, which gets all-wheel drive. All-wheel drive is optional on the other trim levels.

While the RAV4's tweaked 2.5-L engine is a bit better than its predecessor, it still lacks that thrust of power drivers want to feel when getting up to speed. It takes about 9.1 seconds to get from 0 to 60 mph, which is, of course, only slightly better than the Forester.

For scooting about town, the Forest and RAV4 feel pretty practical and give little in the way of hassle. However, getting them up to speed on the highway can be a chore, and trying to pass other vehicles requires some effort. The RAV4's engine does offer a slightly better performance, but not by much.

All kinds of factors contribute to what makes (or breaks) a driving experience. Are the seats well-cushioned? Does the air flow evenly? Does any noise seep into the cabin? Are bumps smoothed over with ease, or does the vehicle jostle around? These are things to consider when making the choice of which vehicle to buy.

The 2019 Subaru Forester puts in an okay driving performance. The brakes feel steady and reliable, even though they do take a little bit of time to firm up. They can easily make a panic stop without any drama. Steering is, as is par for the course with smaller SUVs, lacking some feeling. However, the steering is well weighted. There is some guesswork involved in figuring out exactly where the wheels are tracking. As far as how the Forester handles, it remains stable even when there is some obvious body roll.

The 2019 Toyota RAV4 has a mostly solid performance which is only marred by the steering. The 8-speed transmission smoothly shifts between gears. The brakes are reassuring and perform well under stress, and the vehicle handles mid-corner bumps with ease. The all-wheel drive's torque vectoring provides extra stability while driving around in inclement weather conditions. The steering could use work though. It is vague to the point where drivers have a difficult time knowing if they are putting too much effort in or not.

Cabin design is of importance to note. The Forester's front and rear seats are both packed with comfort. The front seats have enough bolstering and lumbar support to keep riders cozy during lengthy road trips. Most bumps incurred on the road are evened out quickly regardless of which size of wheels are equipped. The only audible outside noises come from the wind and engine when pushed to full throttle. Climate control also works well, and some of the higher trim levels have rear seat vents.

Most of the Forester's controls are easy to use. The digital controls found on the touchscreen display are clear enough, as are the physical knobs and buttons. There are a few controls mounted onto the steering wheel for the driver's convenience too, but there are not so many that they seem to take up the entire wheel.

The cabin is well laid-out with a ton of high-quality soft-touch surfaces and gives front and rear seat passengers plenty of space. Extremely tall passengers are the only ones who will find themselves crunched for space; otherwise, head and leg room are plentiful. The driver does have to deal with a high seat, but it has a lot of room for adjustment and creates better outward visibility. The lengthy side windows and slender roof pillars aid in doing so as well.

In the cargo area, there is plenty of space for storing items. To be more precise, there are 35.4 cubic feet with all seats in place and 76 cubes when the rear seats are folded down. Towing, however, is at the lower end of the spectrum at a maximum of just 1,500 pounds.

The Forester's technology earns some high marks. The only thing that could be improved upon is the Harman Kardon sound system. At lower volumes, the audio quality is fine, but, when cranked up, it loses its clarity. On a brighter note, the two touchscreens have clear graphics and logical, intuitive menus. The voice control functions are also user-friendly with their comprehension of natural speaking. Apple CarPlay and Android Auto can be used to integrate smartphone apps and can be accessed via voice recognition.

By comparison, the 2019 Toyota RAV4 has a cabin that is mostly decent, save for a few issues with seat comfort. The seats in the rear are plenty plush, but the front seat bottoms tend to give out after a little while of sitting on them - not ideal for a long journey. However, the seats have an appropriate height and are easy to adjust. Taller drivers will have a few more issues getting comfortable with the telescoping steering wheel, and, since the seat can't go low enough, finding the perfect driving position is not going to happen for them.

The ride itself is fairly compliant, and the only noticeable bumps come from massive potholes. Otherwise, everything gets smoothed over by the well-tuned suspension, and body roll is kept at bay. The engine can get mouthy, but it is more like a lion's roar, letting others in the vicinity know its power. The climate control system distributes air evenly, although the seat heaters will not feel terribly warm on a cool day.

The view from the cockpit is wide open thanks to the RAV4's thin roof pillars. Blind spots have been diminished due to the design of the quarter windows and mirrors. And, even if they weren't, the standard rearview camera and optional surround view camera alleviate any issue with seeing around the vehicle.

Speaking of technology, the RAV4 has it in abundance. The one thing conspicuously absent is Android Auto. iPhone users can hook their phones up and use Apple CarPlay, but Android users have to suffer with Toyota's Entune app. Some of the infotainment controls are a bit clunky and outdated too.

In the cargo area, there is 37.5 cubic feet of cargo space available without folding the seats down. When the rear seats fold (and they do fold down flat), this number maxes out at 69.8 cubes. It is not a best-in-class amount, but it is certainly sufficient for loading up on cargo.

Like the Forester, the RAV4 has a standard max towing of 1,500 pounds. The Adventure trim will boost that number up to 3,500 though.

Overall, the RAV4 has a little bit more power than the Forester and is more likely to be the option selected by those who want something with a more aggressive nature. The Forester feels a bit more practical and user-friendly even if it is not the spunkier of the two rides. Therefore, this one is a toss-up.

Safety is an important factor on any vehicle, and the technology behind it is becoming even more abundant. The 2019 Toyota RAV4 comes with features like forward collision warning with pedestrian detection, lane departure warning with a steering assist function known as Line Tracing Assist, and blind spot monitoring. Adaptive cruise control works exceptionally well on the RAV4, going all the way down to 0 mph, which is something systems on other vehicles cannot do.

The 2019 Subaru Forester is likewise loaded with an array of driver aids. It suite of driver aids is known as Subaru Eye Sight, which includes a Driver Focus system, which monitors the driver's alertness and issues a warning if it detects the driver becoming drowsy or distracted. This, as well as the other features, work impressively well and are a serious strong point for the Forester.

Safety ratings are also worthy of mention here. Both the Forester and RAV4 got 5/5 stars overall from the National Highway Transportation Safety Administration (otherwise known as NHTSA). The Forester only received one point off for the Rollover test, and there was a 16.9% risk of rollover noted, which is about standard for this segment. NHTSA assigned the RAV4 5/5 stars on all but the Overall and Driver Front Barrier Crash tests and the Rollover test (on which a 15.9% risk of rollover was noted).

While both vehicles seem to emphasize safety, it is the Forester that comes out on top with its superb driver aids and excellent crash test scores.

This all begs the question of which vehicle has the best value. The Forester prices around $1,000 below the RAV4, and both line-ups are composed of five different trim levels. The price range on the Forester is between $24,295 and $34,295 while the RAV4 sits at $25,650 and $35,050. They also tend to get about the same amount of gas mileage, give or take a mpg here and there depending on the trim level.

Indeed, this is a very close race, hence why the champion has to be crowned based on what the average driver is looking for: power versus practicality.

In the end, there can only be one. And, in this comparison, the 2019 Subaru Forester ever-so-slightly edges out the 2019 Toyota RAV4. The RAV4 is a great investment for those who can splurge on the Adventure trim level. The Adventure is a great little off-roader. However, with its excellent safety features, infotainment setup, and cozy interior, the Forester makes up for its underwhelming engine.

Save Money on a 2019 Subaru Forester:
Are you Shopping for a New Vehicle? Find the Best Deals with "Free - No Hassle" Prices Quotes.