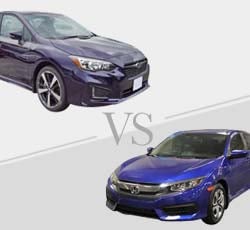 Finding the right sedan in a market that is saturated with them can be a tough process for consumers. Automakers compete year after year to produce the best sedans. But which are the best new releases for 2019?

For most car gurus, the 2019 Subaru Impreza and Honda Civic rank high on the list of small sedans. Why is that? And is one a better buy than the other? Knowing the differences between the Impreza and Civic can help buyers choose the vehicle that is right for them.

The Civic and Impreza have a lot of differences in terms of performance and mechanical specs, and their interior designs also help set them apart. Now, it is time to get down to the nitty-gritty details of what exactly makes the Impreza and Civic distinctive.

The Civic has two powertrain options for the coupe and sedan styles. On the LX, there is a standard 2.0-L 4-cylinder engine that produces 158 hp and 138 lb-ft of torque. Upgrading to the second trim level up, the EX, results in getting an even more powerful engine - a turbocharged 1.5-L 4-cylinder. This engine musters up 174 hp and 162 lb-ft of torque. On the hatchback, the turbo 1.5-L is standard issue. A 6-speed manual transmission is also standard, but a continuously variable automatic transmission (also known as a CVT) is optional.

Subaru gives every 2019 Impreza a 2.0-L 4-cylinder engine that generates 152 hp and 145 lb-ft of torque. The 2.0i and Sport trim levels get a 5-speed manual transmission while the rest have a CVT equipped. The CVT is an option on the Sport and 2.0i, but it will creep the cost up.

When it comes to performance, the Impreza lags behind the Civic since it does not have a turbocharged option. The Civic's 1.5-L turbo engine is what really distinguishes it from the competition. It has a lot of pep for a small displacement engine, and it helps the vehicle accelerate quickly. It goes from 0 to 60 mph in roughly 6.7 seconds, which is one of the speediest times for this segment.

The Impreza just doesn't cut it with the 2.0-L engine. Its acceleration speed is around 9.4 seconds, which is considerably slow for a small sedan. It certainly seems sluggish next to the zippy Civic. It feels fine enough around town, but the Impreza just is not as exciting to take on the highway as the Civic.

There are factors other than speed that can make or break a vehicle's overall drivability. Secure brakes, a good amount of user-friendly tech features, comfy seats, plenty of cargo space - all of these can factor into what makes a vehicle worthy of purchase.

When it comes to braking, the Impreza's system possesses a lot of security. The brakes have just the right amount of firmness. When the driver has to rapidly apply the brakes to make a panic stop, the Impreza can come to that stop in 121 feet. And it does so without veering off-center or any unpredictability.

The Sport and Limited trim levels provide an excellent amount of feedback to the driver, and steering always feels like it is right on center. The Impreza handles well and offers a lot of stability, especially with all-wheel drive equipped. Overall, the only things that limit the Impreza's driving performance are its grumbly CVT and the under-powered engine.

Inside of the Impreza, things are kind of a mixed bag. The seats up front are comfy enough, but they feel too flat in the rear for passengers to really enjoy sitting in for long rides. The suspension smooths out road imperfections, but road noise and the CVT's grumble at full throttle do become obnoxious. Also, with the way the vents are set up in the front, the cabin takes longer to cool or heat than it should.

The interior design isn't terrible though. Controls are easy to use and labeled in big, clear lettering. Many adults will be able to slip into and out of the seats without a hassle since the ride height is accommodating. Also, drivers can easily find a good driving position and get clear visibility thanks to the massive windshield, small quarter windows, and slender roof pillars. Unfortunately, some of the lower trim levels look like they have cheap parts that take the overall quality down a few notches.

The Civic has one of the best driving performances in its class, if not the best. Braking feels extremely secure due to the firmness of the pedal. Steering and handling both show refinement too. Steering feels natural and provides plenty of feedback to the driver. There is virtually no noticeable body roll, and the ride has a good amount of spunk to it. Driving the Civic certainly is not boring.

It is also far from being uncomfortable. The Civic's seats are cozy and supportive, both front and back. The driver seat is power-adjustable and can be adjusted according to height. This is ideal for taller driver who need more space or shorter drivers who need less of it. Also, the ride itself is very controlled in its mannerisms, smoothing over mid-corner bumps with grace.

The only noise you will hear seeping into the cabin comes from the Civic's powertrain. The engine does growl when pushed hard, and the CVT can emit a low whine. A little bit of wind and road noise might make its way in too, but that is only when the vehicle goes over really rough surfaces. Otherwise, it stays fairly tame.

Honda designed the 2019 Civic to have a truly dynamic and utilitarian interior. All of the controls are in spots that are easy to reach and are clearly labeled so as to avoid any confusion. The old volume control slider is replaced by a physical knob, which reflects the fact that Honda is listening to consumer complaints.

Drivers should keep in mind that the Civic has a low ride height, which might make getting in and out difficult for taller individuals or people with limited mobility. Other than that, though, access should be easy enough for adults and children alike.

The cabin itself is spacious, and even having a sunroof up top does not take away head space from those sitting up front. Three-quarter view to the back of the vehicle is reduced a little bit by the sloping roof line, but a backup camera eliminates a lot of the hassle. Also, with 15.1 cubic feet of cargo space available, the Civic has one of the roomiest trunks in the entire class.

Cup holders come a-plenty and are quite large, so occupants will not have to hold their extra-large cups while the vehicle is going. Other small item storage areas can be located throughout the cabin and are well-sized and placed. The double-decker cubby hole up front is especially handy for storing small items.

Technology on both of these vehicles has some pros and cons. Both vehicles are loaded with standard tech gadgetry, and each has plenty of options for upgrading. The 2019 Subaru Impreza comes with standard Android Auto and Apple CarPlay as well as Bluetooth connectivity. Upgrading to one of the Premium models results in the addition of HD radio, a CD player, and two USB ports in the back. The one issue people tend to have is with Bluetooth freezing up.

Should a customer buy the Limited trim level or higher, they will get the 8-inch touchscreen display. It has the look and feel of a smartphone's app screen, so navigating it should feel fairly intuitive. Integrating a smartphone with the Impreza is also easy and allows for quick access to cell phone apps. Voice recognition responds quickly to the driver's commands and seems less glitch-y than what can be found in other automobiles.

The 2019 Honda Civic is likewise loaded with different tech features. In years past, Honda's infotainment system has been its downfall. This model year, Honda made a lot of changes so that the system is a lot more effective and user-friendly. Android Auto and Apple CarPlay come standard and are still great stand-ins for the apps built into the car. However, voice control is really the only native Civic feature that is better left to smartphone app integration, as it struggles to recognize natural speech patterns. Bluetooth also comes standard, and there is a 7-inch touchscreen display that shows crystal-clear graphics.

Overall, while both the 2019 Honda Civic and Subaru Impreza have a lot of good stuff to offer in terms of drivability, the Civic takes the cake. Its impressive, well-rounded ride quality and interior design give it the advantage over its competition.

Of course, safety is of importance to note. Buyers should be pleased to note that both vehicles are regarded as safe, both by the companies that manufactured them and those that tested them.

The 2019 Subaru Impreza has beenfully tested by the National Highway Transportation Safety Administration (better known as the NHTSA), who award the Impreza 5/5 overall stars. The vehicle 5-starred each test, and there was just a 9.5% rollover risk noted. The IIHS (an acronym for the Insurance Institute of Highway Safety) gave the Impreza all "good" ratings on its tests.

The 2019 Honda Civic also got 5/5 overall stars on its NHTSA test and nailed every individual section. And, like the Impreza, it was found to have a 9.5% rollover risk. This is a typical percentage for a small sedan, coupe, or hatchback. The IIHS likewise gave the Civic all "good" ratings.

Now, safety features are in high demand, so it should come as no surprise that both vehicles are loaded with them. The 2019 Subaru Impreza comes with things like Subaru EyeSight, a bundle of driver aids including emergency braking, adaptive cruise control, and lane keep assist. Reverse automatic braking can come in handy while having the vehicle in reverse, as the system can alert the driver to an impending crash. Most of these features work well and make up for some of the issues with limited visibility.

For 2019, Honda gave the Civic the entire line-up of Honda Sensing driver aids as standard. This means that drivers on any trim level benefit from having the collision mitigation braking system, road departure mitigation system, adaptive cruise control, lane keep assist, and traffic sign recognition right at their fingertips. Other features, such as blind spot monitoring, are standard on higher trim levels.

The only problem with any of these features is that the forward collision mitigation feature is overly-sensitive and will send out warnings when none are needed. Other than that, things work as expected and come in handy when any potential threat is detected.

The 2019 Subaru Impreza and Honda Civic are both good choices among the other vehicles in their class. The thing that really sets them apart is their powertrain options. The fact that Honda offers a turbo engine from the second trim level on up gives it a lot more value. Unfortunately, Subaru has not yet seen fit to add a turbo option, which would help it compete better with the well-loved Civic.

Clearly, the 2019 Honda Civic is the better option, especially for those who crave that extra kick of power from a turbo-charged engine. The Civic is spunky and designed with convenience and comfort in mind. Still, it manages to remain one of the most fuel efficient vehicles in its class. It still needs a few tech tweaks, but those are things many drivers might be willing to overlook.

Save Money on a 2019 Subaru Impreza:
Find New Car Clearance Prices - Many Vehicles are Selling Below Dealer Invoice Prices.