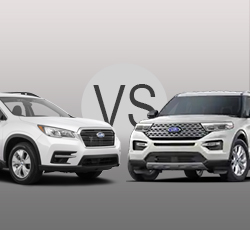 2020 Ascent vs Explorer - How do they stack up? Which is Better?

Three-row SUVs have become some of today’s best-selling family haulers. They’re perfect for folks who need to carry more people and cargo. Subaru’s first three-row SUV, the 2020 Subaru Ascent, has received many outstanding reviews. Critics applaud the Ascent for its above-average off-road prowess and balanced ride.

For decades now, the Ford Explorer has remained a top-selling model. Expect the fully designed model to remain extremely popular. Its improved handling and new technologies will appeal to a lot of people. Thrill-seekers will be especially interested in the sporty Explorer ST. In this head-to-head clash, car shoppers will learn whether the 2020 Subaru Ascent or the 2020 Ford Explorer is a better choice.

Subaru keeps things simple by only offering the new Ascent with one powertrain. A 2.0-liter, turbo four-cylinder engine provides the necessary muscle. It pumps out a reasonable 260 horsepower and 277 lb-ft of torque. Fuel efficiency is aided by an automatic CVT.

In contrast to the 2020 Subaru Ascent, the 2020 Ford Explorer gives you two powertrains to choose from. Most buyers are expected to pick the standard 2.0-liter, EcoBoost four-cylinder engine. It develops 300 hp and 310 lb-ft of torque. A twin-turbo V6 engine is optional, which puts out an exciting 400 hp and 415 lb-ft of torque. Both engines use a 10-speed automatic transmission.

In terms of pure performance, the Ford Explorer outclasses the Subaru Ascent. Testers have clocked the Ascent with a 0-60 mph sprint of 7.3 seconds. By comparison, drivers can expect the Explorer to dash to 60 mph in 6.8 seconds. Opting for the Explorer’s twin-turbo V6 engine results in a 0-60 mph time of 5.2 seconds. Even some sports cars can't accelerate quicker than the Explorer. On the downside, Ford’s 10-speed transmission isn’t as smooth at times.

Drivers can take advantage of the Explorer’s higher tow rating, which tops out at 5,600 pounds. Meanwhile, Subaru rates the Ascent to tow up to 5,000 pounds. Drivers will really notice the Explorer’s extra muscle when hauling a load uphill.

These two SUVs are a close match in terms of fuel economy. The Explorer delivers up to an EPA-calculated 21 mpg town/28 mpg highway. Choosing the Explorer’s bigger engine lowers economy to 18 mpg town/24 mpg highway. Premium fuel is also required for maximum power. All versions of the Ascent return about 21 mpg town/27 mpg highway on regular gas.

Both SUVs offer good handling for being three-row family vehicles. Many test drivers rave about the Ascent’s nimble and composed handling. However, the Ford Explorer does feel more athletic. This fact can be attributed to its new rear-wheel-drive platform. A stiffer sport suspension and quick-ratio steering are found on the racier Explorer ST.

When equipped with all-wheel drive, you can expect the Explorer to perform well on snow-covered roadways. However, only the Ascent receives a standard Symmetrical AWD system. This full-time AWD system adds to the Ascent's versatility. To get four-wheel drive, Explorer buyers must spend extra money.

The 2020 Subaru Ascent is hands-down among the best SUVs for active families. It comes ready for a serious outdoor adventure. Aside from a standard AWD system, this SUV also benefits from Subaru’s X-Mode system with hill descent control. At the touch of a button, X-Mode helps drivers to safely tackle slippery terrain.

Strong brakes help make the Ascent a secure family vehicle. Automotive journalists rave about how quickly the Ascent stops during panic situations. Although the Explorer also has a short stopping distance, some test drivers have found that the SUV tends to nosedive under heavy braking.

When it comes to long-term reliability, the Ascent ranks below other SUVs in the class. J.D. Power gives the Ascent a 2.5 out of 5.0 rating in predicted dependability. A 3.0 dependability rating puts the new Explorer a notch ahead of the Ascent. There’s no difference in warranty coverage between these SUVs. They both provide 36,000 miles of bumper-to-bumper protection and 60,000 miles of powertrain coverage.

Families will look forward to traveling in the 2020 Subaru Ascent. It has an extremely supple ride that compares to that of a luxury model. Some drivers have complained about the 2020 Ford Explorer’s stiffer ride. At times, even small cracks in the road can be felt. The Ascent easily wins in terms of overall ride comfort.

The Ascent is also extremely quiet for a large vehicle. On long trips, some kids will quickly start to fall asleep. There’s barely any noise penetrating the cabin. You’ll also find the Ford Explorer’s cabin to have a serene atmosphere. A dual-wall dashboard and acoustic glass help the Explorer to remain hushed at all times.

While the Subaru Ascent accommodates up to eight people, the Ford Explorer has a seven-passenger seating capacity. Both of these three-row SUVs provide ample passenger room. There’s just a tad more legroom in all rows of the Explorer. However, extra hip room enables the Ascent’s third row to seat up to three people as opposed to just two.

Neither SUV has a big advantage over the other in cargo space. While the Ford Explorer provides 18.2 cubic feet of storage space in the rear, the Subaru Ascent has 17.8 cubic feet of cargo space behind its third row.

When behind the wheel of the Subaru Ascent, drivers will love its superior outward visibility. It is amazingly easy to see out of the Ascent, which takes safety to the next level. Unfortunately, visibility is not as good in the Explorer. Thick roof pillars and stubby side glass block the driver’s view at times. Drivers certainly need to double-check before attempting to switch lanes.

Subaru’s Starlink touchscreen infotainment system is beloved by drivers. It doesn’t take much thought to use the interface. The climate and audio controls are also easy to locate. Ford’s Sync 3 interface, which received top marks for its pinch-and-zoom functionality, is also a good system. While Sync 3 can be upgraded with a larger 10.1 touchscreen, many users find it to be a bit more complicated to use.

Over the years, Subaru has become known as an industry leader in vehicle safety. It comes as no surprise that the 2020 Subaru Ascent received a perfect rating in all of the NHTSA’s impact tests. However, the 2020 Ford Explorer received an identical five-star overall safe score. When riding in these two SUVs, families will enjoy exceptional protection.

A Top Safety Pick rating from the IIHS further proves that the Ascent is a safe ride. However, keep in mind that the Ascent’s standard headlights received a poor rating. The new Explorer wasn’t able to score an IIHS Top Safety Pick rating. It only scored an acceptable rating in the organization’s small overlap frontal crash test for the driver’s side.

Both of these SUVs enhance safety by providing standard accident-avoidance technologies. Some of the common safety innovations include automatic panic braking, lane keeping, and adaptive cruise control.

Only the Ascent features a Rear Seat Reminder. By monitoring the rear seat, it reminds parents about children and pets sitting in the back. The Ascent also offers turn-adapting headlights, which helps drivers to see better around curves.

One of the Explorer’s exclusive features is MyKey. It allows you to set a speed limit, which is especially beneficial for parents who plan to share their vehicle with a teen driver. Meanwhile, Evasive Steering Assist enhances the driver's ability to dodge obstacles in the road. City dwellers will want the Explorer’s Enhanced Active Park Assist system. This feature handles the task of steering the SUV into parking spots.

For some car shoppers, choosing between the 2020 Subaru Ascent and the 2020 Ford Explorer is going to be difficult. Both SUVs have some clear pros and cons.

Drivers seeking more fun on the street will lean towards the new Explorer. It offers sportier handling and far quicker acceleration off the line. Meanwhile, folks seeking pure comfort will be happier with the new Ascent. It has a much softer ride. Although the Ascent may not offer a sport suspension, most people will love the way it drives.

You can trust both SUVs to take you off the beaten path. Subaru’s rugged X-Mode system does a fine job of helping drivers to tackle trails. A standard Symmetrical AWD system also enables the Ascent to crawl through the snow and mud with ease. Keep in mind that protective skid plates come with the Explorer’s optional tow package.

Styling is a matter of personal taste. Like so many other Subaru cars and SUVs, the new 2020 Subaru Ascent doesn’t have a flashy appearance. Drivers who desire a more exciting appearance will want the 2020 Ford Explorer. Blacked-out styling cues and quad exhaust tips help give the Explorer ST the look of a muscle truck. While the Ascent’s exterior may not excite onlookers, it has the best interior design. Some people won’t like the Explorer’s dull plastics on the inside.

One big feature missing from the Ascent’s list of options is a fully digital display. The Explorer’s available digital gauge cluster allows drivers to choose different colors and themes. Ascent buyers only have access to a 6.3-inch driver information display.

While these SUVs are a good match, the 2020 Subaru Ascent wins this comparison test. It proves to be a better overall family vehicle. Car shoppers will also love the Ascent’s outstanding value. Buyers have an opportunity to experience a lot more luxury for the money. Most of the Ascent’s upper trims are substantially more affordable.

Save Money on a 2020 Subaru Ascent:
Are you Shopping for a New Vehicle? Find the Best Deals with "Free - No Hassle" Prices Quotes.