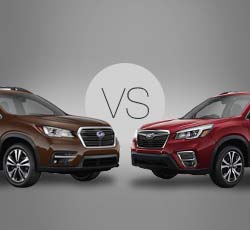 2020 Ascent vs Forester - How do they stack up? What are the differences?

Subaru might not make a wide variety of vehicles, but the ones they do make have a reputation for being reliable, safe, and practical. Anyone looking for a new SUV that has all-wheel drive will likely be checking out the Subaru Ascent and the Subaru Forester. These two vehicles perform very well in many regards, and they have numerous amenities that modern consumers will appreciate. While the Ascent and Forester share some similarities, there are important differences between the two, and this guide will go over those in detail.

Both vehicles, though, have the same amount of ground clearance, which is 8.7 inches. This lets them easily clear obstacles that may be in the way, especially if traveling over uneven terrain.

Cargo space is usually a point of interest when people are shopping for new SUVs. The Subaru Forester has a total cargo capacity of 70.9 cubic feet when the rear seats are lowered. When those rear seats are up, there is 28.9 cubic feet of cargo space. In comparison, maximum cargo volume in the Ascent is 86.5 cubic feet when both back rows are lowered. Behind the second row, there is 47.5 cubic feet of storage room, and there's a little less than 20 cubic feet of cargo space behind the third row of seating. On either vehicle, people can utilize roof racks to transport larger gear such as bikes, skis, or canoes.

While the vehicles are similar in terms of style, there are some minor differences. For instance, the Ascent starts out with 18-inch wheels and moves up to 20-inch wheels on the higher trims, and it has available chrome door handles and a panoramic moonroof that can tilt and slide open. The Forester starts out with 17-inch wheels, and its higher trims are enhanced with 18-inch wheels. Like the Ascent, it has available LED fog lights, but it only has chrome side mirrors and not chrome door handles.

These are both capable SUVS, so drivers who value performance will be pleased with either the Subaru Ascent or the Subaru Forester. That being said, the Ascent is the more powerful of the two. It has 260 horsepower and 277 pound-feet of torque, thanks to a 2.4-liter turbocharged engine. This engine is paired with a Lineartronic continuously variable transmission (CVT) for solid power delivery at a full range of speeds. Maximum towing capacity of the Ascent is 5,000 pounds, a respectable number that gives people some flexibility when it comes to carrying cargo.

In the Subaru Forester, there's a 2.5-liter engine. While it's slightly bigger than the Ascent's engine, it lacks the turbocharger. It can generate 182 horsepower and 176 pound-feet of torque. While these statistics don't break the 200 mark, they are still impressive numbers, and they'll be sufficient for the majority of drivers in most situations. Towing capacity in the Forester is 1,500 pounds, and this vehicle uses the same type of transmission as the Ascent.

Both of these Subaru SUVs have a number of mechanisms in place so that drivers can maintain control. First, they have Subaru's well-known symmetrical all-wheel-drive system, which provides extra traction when needed. Vehicle Dynamics Control, Traction Control, and Active Torque Vectoring are all complementary systems that make small adjustments in order to improve handling and keep wheels from slipping. Standard on the Ascent and standard on almost all trims of the Forester is Hill Descent Control. This keeps the vehicle from gaining too much speed on downhills.

X-MODE can be thought of a component that makes all-wheel drive work even better. It optimizes engine and transmission settings in order to minimize wheelspin, and it can be particularly useful when conditions are very poor. X-MODE is found on all trims of the Ascent and all of the Forester trims, with the exception of the entry-level Forester.

When comparing fuel economy, it becomes clear that the Ascent has given up some efficiency so that it can have the more powerful engine. On the Ascent, fuel economy is either 21/27 or 20/26 (city/highway) miles per gallon, depending on whether one gets the the lower two trims or the higher two trims. The Forester earns an estimated 26/33 miles per gallon, so this is definitely notable if anyone is concerned about gas consumption.

Similar features are found inside the cabins of the Ascent and Forester, but not everything has been made equally. Starting with the seating, the Forester has an available 10-way power adjustable driver's seat while the Ascent only has an eight-way power adjustable seat in that position. Both models have heated front seats, but the Ascent also has ventilation in the front seats. What's nice about the two models is that they have heated rear outboard seats on the higher trims.

Both SUVs have leather-trimmed upholstery on their Limited and Touring trims. Since there is a Sport version of the Forester, there's the opportunity get special cloth seats with orange stitching on this vehicle. The Ascent doesn't have this option.

There are many other interior components that have been put in place for convenience. For instance, they can be equipped with multiple USB ports in all rows of seating, a power rear gate, tie-down hooks in the cargo area, and keyless access with push-button start and PIN code access. The Forester has an available dual-zone climate system, while the Ascent has a tri-zone system, which makes sense given their respective seating configurations.

The infotainment systems are nearly identical on the Ascent and Forester. They start out with 6.5-inch touchscreens that have a STARLINK interface, Apple CarPlay, Android Auto, and Bluetooth. Being very generous, Subaru has also included SiriusXM Radio, HD Radio, and a CD player on all trims of the the Ascent and Forester trims.

At the Limited level of the Forester and the Premium level of the Ascent, the system is upgraded with an eight-inch touchscreen. It includes certain cloud-based applications to give people more access to a range of information. Integration navigation is standard on the the Touring trims and is available on the Forester Limited, Ascent Premium, and Ascent Limited. With navigation, people can receive turn-by-turn directions that take current traffic conditions into account.

The Ascent has six speakers on its first three trims, with the Touring having a Harman Kardon Quantum Surround Sound system that has a 792-watt amplifier and 14 speakers. On the Forester, the base trim has only four speakers, the middle three trims have six, and the Touring has nine Harman Kardon speakers and a 576-watt amplifier. On the two SUVs, 4G LTE Wi-Fi capability starts at the Premium level, which is one step up from the base model.

As expected, Subaru has concentrated a lot of its efforts in building safe vehicles. The company has integrated many passive and active safety features into the Ascent and Forester. They have airbags in the front, in the side curtains, and mounted in the seats. The LATCH system makes it simpler to secure child seats, and all rear doors comes with child-safety locks.

Helping people see what's around them is a key way to prevent accidents from occurring. The standard rear-vision camera on the Ascent and Forester helps tremendously in this regard while people are in reverse, and the Ascent comes with an available 180-degree front-view monitor to provide people with even more video information.

EyeSight Driver Assist Technology is found throughout the trims of the Ascent and Forester. It includes lane departure and sway warning with lane keep assist, an adaptive cruise control program that can maintain proper distancing with other vehicles, and pre-collision braking. This last component reduces the chances of rear-ending other vehicles, as these Subarus can independently apply pressure on the brakes if they sense that they're approaching other vehicles too quickly.

Automatic high beams are built into the Forester Sport, Limited, and Limited; blind spot monitoring with rear cross-traffic alert is found on the Forester Limited and Touring; and a distraction mitigation system called DriverFocus is included on the Touring trim. In the Ascent, the automatic high beams start to be included at the Limited level, and blind spot monitoring starts at the Premium trim. The driver attention program is not available on the Ascent.

Just like pre-collision braking can keep people from hitting obstacles in front of them, reverse automatic braking can reduce the likelihood of hitting obstacles behind the Subarus. It monitors the area behind the vehicle while it's in reverse, and it automatically puts pressure on the brakes if it seems like a driver is about to back into something. This component is available on the Forester Sport, Forester Limited, and Ascent Premium, and it's standard on the Ascent Limited, Ascent Touring, and Forester Touring.

The Subaru Forester and Subaru Ascent have a lot of advantages. They're durable while being easy to maneuver around urban areas, they're equipped with all-wheel drive to make them safer in wintry conditions, and they have nicely appointed cabins. Where they mostly differ is related to size, power, and of course, price.

The Ascent is the larger SUV, and it's a unique Subaru because it has three rows of seating. For this reason only, many people will turn to this model. It also has the more powerful engine, which comes along with greater towing capacity. In the Ascent, people can start to enjoy more advanced technological and safety components at lower trims when compared with the Forester. The Forester still has a capable engine, along with two comfortable rows of seating and a spacious cargo area.

The pricing of these Subarus makes it evident which model would be considered the more upscale option. The Ascent starts out at almost $32,000. The Premium jumps up to $34,395, the Limited takes things up a notch to $39,345, and the Touring tops out the list at $45,045. These top two trims, especially the Touring, may cost more than many people are able to spend; in this case, they would likely be happy with the base model or the Ascent Premium.

In contrast, the Forester has a much more affordable starting price of $24,495. This is an easier pill to swallow for anyone with limited funds or those who simply don't want to spend that much money on their vehicles. The Premium and Sport are offered for modest increases in price, and both remain under $30,000. The Forester Limited costs $31,095, and the Touring costs $34,595.

From a financial standpoint, the Forester is the more attractive vehicle, even at the higher trims. However, it doesn't have the extra seating and horsepower that the Ascent does. In the end, people will have to determine how important power and interior size really are to them. Those that need more space and capability will go with the Ascent, and those that don't will be more than satisfied with the Forester.