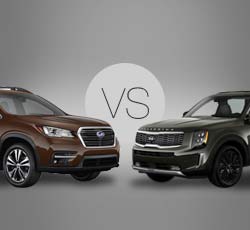 2020 Ascent vs Telluride - How do they stack up? Which is Better?

Three-row SUVs have come to dominate the market in many ways. They are the ideal vehicle for larger families who do not want to settle for a minivan. Considering the amount of competition, it is hard to imagine new vehicles trying to carve out a piece of the market.

That is exactly what both Subaru and Kia have done, however. The Subaru Ascent debuted in 2019, while the Kia Telluride joined the game in 2020. Both SUVs are the largest offering from their respective brands and are hoping to become new favorites for families.

Consumers who are looking to try out a modern three-row SUV will want to research the 2020 Subaru Ascent as well as the 2020 Kia Telluride. In this guide, both will be explored in-depth. The goal is to point out how these vehicles got things right and ways they fall short, particularly when compared to each other.

For some, the powertrain is the most important factor, especially in a vehicle this large. Both the Ascent and the Telluride have only one engine option for 2020. While the Subaru relies on a turbocharged four-cylinder, the Telluride has gone with a V6.

The Ascent's turbocharged 2.4L four-cylinder is able to make 260-horsepower and 277 lb-ft of torque. This is smaller than what buyers will find underneath the hood of most vehicles of this size. That said, it seems to be able to keep the Ascent moving with minimal trouble. The continuously variable transmission shifts smoothly.

For the Telluride, a 3.8L V6 making 291-horsepower and 262 lb-ft of torque is standard. The more powerful engine means that drivers can pass on the highway with a little more confidence in the Telluride compared to the Ascent. As for the transmission, the Telluride utilizes an eight-speed automatic.

One major plus in the Ascent's column is the fact that it comes standard with all-wheel-drive. The Telluride is a front-wheel-drive SUV. Buyers who want all-wheel-drive can get it on any trim level but must be prepared to pay extra for it.

Either vehicle can tow an impressive amount. While lower trim levels of the Ascent max out at 2,000 pounds, upper trims can go up to 5,000 pounds. The Kia Telluride can also tow up to 5,000 pounds when it is properly equipped. For just under $800, drivers can add a self-leveling rear suspension to the EX trim level and up of the Telluride.

The Ascent offers excellent fuel economy to buyers. In the city, it is estimated to get 21mpg. On the highway, drivers can expect to see 27mpg. The Telluride, on the other hand, does very well for having a V6. Front-wheel-drive models get 20mpg city and 26mpg highway.

Going up to all-wheel-drive in the Telluride means getting 19mpg city and just 24mpg highway. Buyers who have their hearts set on all-wheel-drive will want to note just how much more fuel efficient the Ascent is. At the same time, the Telluride can offer more power to go along with that extra traction.

Despite Subaru's stellar reputation for making durable vehicles, the Ascent received only 2.5 stars from J.D. Powers when it comes to predicted reliability. On the other hand, the Telluride received 3.5 out of a possible five stars in this category. That is considered just slightly better than average.

Both of these SUVs have a seating capacity of up to eight. With the Telluride being 196.9-inches in length and the Ascent being 196.8-inches, it is no surprise that the interior space is similar in many categories. The Telluride is over two inches wider, however, giving it more shoulder room in the first and second rows. Somewhat surprisingly, the Ascent offers more shoulder room for the third row.

Taller passengers will much prefer the second-row of the Telluride. It has 42.2-inches of legroom, while the Ascent has just 38.6-inches. The Telluride also has a touch more head and shoulder room, making it more comfortable overall in the second-row.

Cramped third-row seating is something these vehicles have in common. While the Ascent may have won in third-row shoulder room, it loses out in third-row leg and headroom. The Telluride is far from roomy in the back, offering less than an inch more space in both of those categories.

The cargo space of both the 2020 Ascent and Telluride is better than average. In the Subaru, drivers will find 17.8 cubic feet behind the third-row. With the third-row down, there is 46 cubic feet. With only the front seats up, the Ascent has a cavernous 86.5 cubic feet to offer.

As impressive as those numbers are, the Telluride does even better. It has a spacious 20 cubic feet behind its third-row. Like the Ascent, it has 46 cubic feet with just the third-row down. The maximum cargo capacity of the Telluride is 87 cubic feet, just barely beating out the Ascent.

The base model of the Ascent has cloth upholstery. Going up to the next trim will make the cloth stain-resistant, something that families with young children will really appreciate. Leather is available on top trims. Tri-zone automatic climate control is standard across the board and moving up the trim ladder unlocks things like heated first and second-row seats, power-adjustment for the front seats, and a leather-wrapped steering wheel.

For the Telluride, buyers start out with simulated leather upholstery in the entry-level model. It also gets a leather-wrapped steering wheel. Going up to the EX trim means upgrading to genuine leather upholstery. Like the Ascent, the Telluride offers things like heated first and second-row seats and power-adjustable front seats in select models.

The standard touchscreen size for the Telluride is 8-inches, compared to the 6.5-inches found in the entry-level Ascent. The Ascent can upgrade to 8-inches, while the Telluride goes all the way up to 10.25-inches. No matter the screen size, buyers will find the infotainment system in both vehicles is user-friendly.

Smartphone integration using Android Auto or Apple CarPlay is standard on all trim levels of both the Ascent and the Telluride. They both also have USB ports located in all three-rows to help everyone stay charged. Navigation is an available upgrade for either vehicle. Buyers can also get an upgraded sound system from Harmon Kardon on upper trim levels of either SUV.

The Telluride has a few extra tech features that may make it more attractive to buyers. From the EX trim level and up, for example, is the "Quiet Mode" feature. This silences the speakers in the third-row and is perfect for when the kids nod off on a long drive. These models also add a wireless charging pad, a feature unavailable on the Ascent. In the Ascent's plus column, however, is the availability of a WiFi hotspot. This is a feature that is surprisingly missing from the entire Telluride lineup.

The Ascent offers drivers peace of mind in the form of the EyeSight Driver Assist bundle. This includes popular driver aids such as pre-collision throttle management, forward automatic emergency braking, lane departure and sway warning, a rear seat reminder, adaptive cruise control, and a rearview camera. It also includes the popular head-up display, an advanced feature that is rarely found on entry-level models.

Optional for the Ascent are things such as rain-sensing windshield wipers and automatic high beams. Select models also can be equipped with cornering headlights, reverse automatic emergency braking, and lane change assist. The top-of-the-line model adds things like a rearview mirror camera and a front-facing camera.

Kia also recognizes the importance of loading family vehicles with driver assistance features. That is why the Telluride has an even longer list of standard ones. All models come with everything the Ascent does, minus the head-up display. The Telluride further adds a blind-spot collision avoidance system, driver attention monitor, rear parking sensors, and the safe exit assist feature. Lane change assist, which is only available for the Ascent, is standard for the Telluride.

The Telluride also offers additional driver aids on certain models. For the EX trim and up, the vehicle gains a highway driving assist feature that not only matches the speed of the car ahead, but can even change lanes if needed. The top-of-the-line SX has front parking sensors, a surround-view camera system, and automatic high beams. However, the head-up display that is standard for all Ascent models is merely available for the Telluride SX and costs extra.

In initial pricing, the 2020 Subaru Ascent and 2020 Kia Telluride are very similar. They both start out right around $32,000 for their entry-level trims. The top-of-the-line Ascent is going to cost buyers around $45,000. As for the Telluride, its premier model starts at $41,490.

Savvy buyers know that they should also factor in the cost-to-own when shopping for a new vehicle. In five years, the 2020 Ascent is estimated to cost $21,269 in out-of-pocket-expenses, according to Kelley Blue Book. It is also estimated to lose $16,143 in value. Add those numbers together and buyers will see that the Ascent will cost them about $37,412 over those first five years.

The Telluride is estimated to cost less out-of-pocket, coming in at $19,902 for five years. On the other hand, it is estimated to lose a whopping $21,229 in value. As a result, its cost of ownership is actually considered to be higher, sitting at $41,131.

Overall, the Telluride is the better three-row SUV option for families. Despite having to pay a little extra for all-wheel-drive, it makes up for it by offering more driver aids and a larger touchscreen. Plus, its warranty helps to give buyers that extra peace of mind when it comes to their decision.

At the same time, those who are seeking to spend as little as possible on a three-row SUV with all-wheel-drive should go with the Subaru Ascent. This vehicle has a decent number of driver aids, safety features, and space. It also offers up fuel economy numbers that are hard to beat and a very respectable cargo hold.

Save Money on a 2020 Subaru Ascent:
Are you Shopping for a New Vehicle? Find the Best Deals with "Free - No Hassle" Prices Quotes.