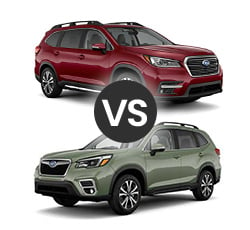 2021 Ascent vs Forester - How do they stack up? What are the differences?

Subaru makes some great SUVs, and the company has rightfully earned a solid reputation because of its reliable, well-built vehicles. The Ascent and Forester are two choices that should appeal to many buyers. The Ascent is a three-row model, while the Forester has a traditional two-row configuration. There are certainly many similarities between the two vehicles, but there are also several differences.

Before jumping into the detailed comparison, here's a quick note about trim levels. The Forester has five trims, which are the base trim, Premium, Sport, Limited, and Touring. The Ascent has all of those trims, with the exception of the Sport.

As a three-row SUV, the Ascent needs to have the space to accommodate so many seats. It has a length of 196.8 inches, making it nearly 15 inches longer than the Forester is. The Ascent is about five inches wider and three inches taller than the Forester is, too. Both models, though, have the exact same ground clearance of 8.7 inches so that they can easily drive over many types of obstacles.

Sometimes, people have to transport long, narrow pieces of equipment. In this situation, just one seat could be folded down instead of the entire back row. Both the Ascent and Forester have second rows with 60/40 configurations to allow for this to happen. The third row in the Ascent, which can accommodate three passengers, also has that 60/40 configuration.

Other than the size difference, it can be hard to tell the Forester from the Ascent when looking at these vehicles from the outside. They have similar stylings, which include LED Steering Responsive Headlights and available LED fog lights. Both start with regular black or body-color side mirrors, with the higher trims having mirrors with integrated turn signals.

In the Touring trim of the Ascent, its side mirrors have a power-folding function. That trim has chrome door handles as well. This little detail can make the SUV look more sophisticated.

Most trims of the Forester have a panoramic moonroof. In contrast, only the Touring trim of the Ascent comes standard with this type of moonroof. The two mid-level trims have it as an available option.

In terms of wheels, the Ascent has the nicer options. Its two lower trims ride in 18-inch wheels, while the two top trims have 20-inch versions. The three top trims of the Forester have 18-inch wheels, and the others ride on ones that are smaller by an inch.

In the area of performance, the Ascent certainly stands out. That's because it uses a 2.4-liter engine that's been enhanced with a turbocharger. With this engine, it has 260 horsepower and 277 pound-feet of torque, and it can haul up to 5,000 pounds.

Rather than using a turbocharged engine, the Forester has a more standard one. It has a decent size, with a displacement of 2.5 liters, and it still has a good amount of capability. It can make 182 horsepower and 176 pound-feet of torque. This should be enough to satisfy many drivers. With this engine, the Forester can tow 1,500 pounds. For those who frequently haul cargo, small boats, or other types of gear, this may not be enough.

Subaru has paired the engines in these two models with Lineartronic continually variable transmissions. The top three trims of the Forester and all of the Ascent trims have a manual mode. In the Ascent and select trims of the Forester, there are paddle shifters conveniently located on the steering wheel. These can be fun to use on occasion, when drivers want to have precise control over shifting.

Both models have symmetrical all-wheel drive. This type of drivetrain can be useful when dealing with slippery conditions as well as when cornering. The best part is that the driver doesn't have to make any adjustments; instead, the vehicle can sense issues with traction and can then make the necessary accommodations.

X-MODE is a program that further optimizes traction. It can kick into gear when the condition are particularly challenging. All Ascent trims have X-MODE, and four out of the five Forester trims have this feature.

Likewise, every Ascent comes stander with Hill Descent Control. This can limit the vehicle's speed when it is traveling down a steep hill. Every Forester, with the exception of the base trim, has this program. All Foresters and all Ascents, though, do have traction control and active torque vectoring to improve handling.

In the Ascent, there's the option to get captain's chairs in the middle row. This would decrease overall seating capacity to seven. Captain's chairs are standard in the Touring and available with the two mid-level trims.

The Ascent has a few extra touches to make it feel more refined. It can have accent trim on its dash and doors that add some visual interest. The two lower trims have ivory carbon fiber-patterned designs, and the others have leather accent trim. The Touring is further enhanced with an additional woodgrain accent in some areas.

People appreciate convenience, and fortunately, the Ascent and Forester can be loaded with systems that make things so much easier. In the SUVs, there can be a keyless access with push-button start. There can also be numerous storage compartments, multiple USB ports in all the rows of seating, and audio controls mounted on the steering wheel. The Ascent has an available auto-dimming rearview mirror that has a compass and the ability to connect with a home's security system or garage door. Plus, the Ascent has a standard power rear gate that can remember a preferred height and close automatically. That same type of liftgate is standard on two Forester trims and optional on two others.

To keep passengers comfortable, there's automatic climate control. The Forester's Limited and Touring trims have dual-zone systems so that the driver and front passenger can choose their own preferred temperatures. All of the Ascents have climate control with three zones. Most Ascents have second-row controls so that those in the back can control their own heat or air conditioning.

To keep people connected, Subaru has given the Ascent and Forester impressive multimedia systems. These come with touchscreens, Apple CarPlay, Android Auto, HD Radio, SiriusXM Satellite Radio, and Bluetooth, so there are many ways to to keep oneself entertained. All trims of these vehicles, expect for the entry-level trims, have Wi-Fi capability.

A 6.5-inch touchscreen is found on the first trim of the Ascent and the first three trims of the Forester. All of the rest have eight-inch touchscreens that may be preferable because they're easier to interact with. Navigation and SiriusXM Traffic and Travel Link are standard on the Ascent Touring and Forester Touring, as are Harman Kardon sound systems. The one on the Forester has nine speakers, and the version that can be found in the Ascent Touring consists of 14 speakers.

Every Forester and Ascent comes with a full suite of driver-assist technology, so in this regard, both models will be able to attract attention from safety-minded consumers. This technology uses various sensors and monitors to determine if the Subaru's passengers are going to potentially be in a troubling situation. If so, the vehicle will alert the driver and if appropriate, it could take corrective measures.

The EyeSight Driver Assist Technology package consists of pre-collision braking to prevent frontal collisions and lane departure warning to ensure that people are in the proper positions in their lanes. It also comes with adaptive cruise control with lane centering. With this program, the Subaru knows how far behind it is from the leading vehicle. If that vehicle slows down, the Subaru will slow down, too, in order to maintain safe distancing.

As a bonus, all Forester and Ascent trims have automatic high beams. These can turn on when the roads are really dark and no other headlights are detected. When other vehicles are present or when there's enough light from street lamps or other sources of light, those high beams would turn themselves off.

The Forester has a driver distraction mitigation system as well. Its able to sense when drivers aren't looking at the roads, and if so, it'll send out a warning.

The Ascent doesn't have that distraction mitigation program, but it does have other things that work in its favor. First, it has an available front-view camera. It can be useful when parking, as it provides a 180-degree perspective of what's in front of the SUV. Half of the Ascent trims have reverse automatic braking to ensure that bumps and scratches don't occur when backing up. Only the top trim of the Forester has this type of automated braking.

With both models, most trims have blind spot monitoring and rear cross-traffic alert. With these features, drivers can have an extra pair of eyes looking out for other vehicles. They're included with the top three Ascent trims and top three Forester trims.

It's clear that the Ascent is the larger SUV with more seating, more cargo capacity, a slightly nicer cabin, and the stronger engine. For all of these reasons, it seems like it could be the right pick for many customers.

However, the Forester may be ideal for those who don't need that extra row of seats or the extra towing capacity. The Forester is nicely appointed, and it should provide a comfortable ride.

Because of its more affordable pricing, the Forester may be more intriguing to customers who are satisfied with two rows of seats. It starts at only $24,795, and its Touring trim is $34,895. In contrast, the Ascent has a starting price of $32,295, and this cost goes all the way up to $45,445 with the Touring. People will definitely have to think about whether the Ascent is worth its extra cost. For those who have large households, it could be, since those extra three seats in the back could be a necessity.