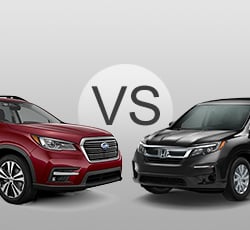 Three-row SUVs are a popular alternative to minivans, which has led to more options on the market in this segment. For families that need the extra seating but do not want a full-size option that is hard to maneuver and park, there are midsize choices like the 2021 Subaru Ascent and the 2021 Honda Pilot. These vehicles manage to walk the fine line between "big enough" and "not too big" very well.

In 2021, the already well-equipped Ascent gains both automatic high beams and adaptive LED headlights. These headlights turn with the wheel, which in theory helps to illuminate the road ahead better when turning. The technology for the adaptive cruise control feature also gets more advanced, with both lane-centering and lane-keep assist being adding.

The 2021 Pilot says goodbye to the six-speed automatic that many models came standard with last year. Now, all models get a nine-speed that most critics agree is much smoother. New standard features are added to all models, including dual-zone automatic climate control, paddle shifters, and stop/start technology for the engine.

These two SUVs are generally considered well-rounded choices, but which one is the smarter buy? Here is a breakdown of how the two compare.

All models of the 2021 Ascent are powered by a turbo 2.4L four-cylinder engine. It generates 260-horsepower and 277 lb-ft of torque while working with a continuously variable transmission. This powertrain setup offers quick acceleration and is generally satisfying. Being a Subaru, all Ascent models come standard with symmetrical all-wheel drive for added traction and confidence.

The 2021 Pilot only has one engine option as well. It is a 3.5L V6 that makes 280-horsepower along with 262 lb-ft of torque. All models come with the standard nine-speed automatic, and most models come standard with front-wheel drive. The Black Edition and Elite models are automatically equipped with all-wheel drive. Like the Ascent, the Pilot provides a good amount of power for moving a larger vehicle around town.

Both of these SUVs can tow up to 5,000 pounds when properly equipped. One thing that the Ascent has over the Pilot is off-road capability. Standard features for the Ascent include hill descent control, 8.7-inches of ground clearance, and of course, all-wheel drive. While the Ascent cannot keep up with the true off-road warrior SUVs on the market, it can hold its own on well-maintained trails.

In its entry-level version, the Ascent is estimated to get 21mpg in the city and 27mpg on the highway. The Limited and Touring trim levels lose one mile per gallon in both categories. Still, these numbers are impressive for a midsize SUV that comes standard with a sophisticated all-wheel-drive system.

With front-wheel drive, the Pilot is going to give drivers around 20mpg city and 27mpg highway. All-wheel-drive Pilot models get 19mpg city and 26mpg highway. This means that the Ascent beats both FWD and AWD models of the Pilot on the highway, and also does better than AWD models in the city.

If buyers want to factor in predicted reliability ratings from J.D. Power, they may find themselves losing interest in both of these options. The 2021 Subaru Ascent got only 2.5 stars out of five, a number considered subpar. Think that's bad? The 2021 Honda Pilot got only two stars. The warranty coverage for these two SUVs is identical, with both being covered for 36,000 miles or three years overall and 60,000 miles or five years for the powertrain.

Between the two, the Pilot has a slight edge when it comes to offering an engaging drive with its V6 engine. Still, both of these midsize SUVs handle well and are capable of keeping most bumps from being felt in the cabin. They both also do a respectable job of preventing road and wind noise from seeping into the cabin.

Like many three-row SUVs, both the Ascent and the Pilot have seating for eight in their standard configuration. Similarly, they both can swap out the second-row bench for captain's chairs, which reduces the seating capacity by one but makes entering the third row a whole lot easier. While both of these SUVs were clearly designed with families in mind, the Pilot goes a bit further by providing little extras such as 15 cupholders.

The front two rows of the Ascent are spacious and comfortable, and the third-row is roomier than many competitors. It is not as roomy as the one in the Pilot, however. Anyone who regularly needs to transport more than four adults will want to choose the Pilot, which has truly impressive leg and headroom in all three of its rows of seating.

Inside the Ascent, durable and stain-resistant cloth upholstery comes standard. This model is available with the normal upgrades one would expect, such as heated front and second-row seats. Second-row sunshades and a heated steering wheel are available as well.

Meanwhile, the Pilot has a more luxurious overall look and feel. Premium materials are used throughout the cabin. It has a similar cloth upholstery standard and is available with the same upgrades as the 2021 Ascent.

Hauling cargo is easy in the Ascent. Behind its third-row, this SUV boasts 17.8 cubic feet. With all of the back seats down, there are 86.5 cubic feet to fill. A power liftgate is standard, and select models get the convenient hands-free feature. For stashing smaller gear, the Ascent comes with a storage compartment hidden in the cargo floor. Still have more to bring along? Roof rails are included on all models.

The Ascent's numbers are considered above average for a midsize SUV, which is impressive until they are compared to the Pilot. Behind its third row, there are 18.5 cubic feet. Cargo capacity maxes out at over 109 cubic feet, making the Pilot a practical choice.

Android Auto and Apple CarPlay are standard features on all 2021 Ascent trim levels. The lower trim levels have a 6.5-inch touchscreen, while upper trims get an 8-inch one for their infotainment systems. Also found in the base Ascent are four USB ports, Bluetooth, and satellite radio. Top trims add a Wi-Fi hotspot, USB ports for the third-row, and navigation.

As for the Pilot, it does not come standard with smartphone integration. In fact, its entry-level model only has a five-inch display and Bluetooth, along with two USB ports. Buyers do not have to go far up the list to find more useful tech, however. All models above the base one have an 8-inch touchscreen, Android Auto, and Apple CarPlay. They also gain HD and satellite radio. Both of these SUVs offer a rear-seat entertainment system.

When comparing test scores from the National Highway Traffic Safety Administration, both the 2021 Ascent and 2021 Pilot look good. Both received an overall score of five stars. It is worth knowing that the Ascent got five stars in both side and front-crash testing, while the Pilot only got four stars in frontal crashes. Both SUVs also received four stars in their rollover testing.

The Insurance Institute for Highway Safety also tests new vehicles for crashworthiness in a variety of situations. For the Ascent, the IIHS gave the vehicle the best possible score of "good" in all six categories. The Pilot got that score in five categories but got "acceptable" in its front small overlap passenger test.

Both standard and available driver aids are very similar for these two SUVs. They both count forward-collision warning, automatic emergency braking, automatic high beams, and adaptive cruise control as standard equipment. The Ascent does come with steering-responsive LED headlights, which are not available on the 2021 Pilot. Also standard on the Ascent and unavailable on the Pilot is a rear-seat reminder. Both offer blind-spot monitoring, rear cross-traffic alert, and LED fog lights on certain trims.

Buyers will find that the 2021 Pilot and 2021 Ascent have nearly identical starting prices, both coming in right around $32,000. The most expensive Ascent will cost $45,445. As for the Pilot, it is available in more trim levels. Its top model will cost buyers around $49,920.

When buyers choose the top Ascent Touring trim, their SUV is equipped with heated and ventilated front seats, a forward-facing parking camera, ambient interior lighting, and perforated leather upholstery. They also get a 14-speaker premium sound system from Harmon Kardon. The front and second-row seats are heated, further adding to the luxury of this trim.

Does the top trim of the Pilot really have enough features to justify spending over $4,000 more? The Pilot Black Edition has unique styling features, along with many of the same things found in the Ascent Touring. It does come standard with a rear-seat entertainment system, giving it a slight advantage over the Ascent. However, the premium sound system for the Pilot Black Edition has only ten speakers, whereas the Ascent Touring has fourteen. Those after luxury features can save themselves considerable money by choosing the Ascent over the Pilot.

Of course, it is not just how much a vehicle costs upfront that matters. Buyers should factor in the "true cost to own" estimates for the Ascent and Pilot when deciding which is a better value. To find this out, experts look at depreciation and out-of-pocket expenses, such as fuel and repairs, over the course of five years.

In many ways, the 2021 Ascent and 2021 Pilot are incredibly similar. They both have scary predictability ratings, roughly the same starting price, and offer spacious cabins. To decide which is the better SUV, buyers will have to look at their driving preferences and how they intend to use their new vehicle.

For most drivers, the 2021 Subaru Ascent is going to be the better choice. It comes standard with all-wheel drive, has more technology features in its base model, and will cost less over the span of five years. It also has the slightly higher predicted reliability rating.

There are some drivers who will be better served by the 2021 Honda Pilot, however. Anyone who needs to drive with teenagers or adults in the third-row will find that they have happier passengers in the Pilot. With a V6 engine and an extra 20 horsepower, the Pilot is arguably the more fun SUV to drive as well.