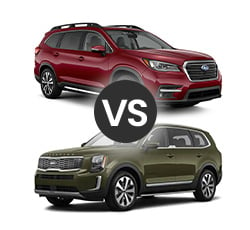 2021 Ascent vs Telluride - How do they stack up? Which is Better?

Three-row SUVs have a lot of appeal for certain types of buyers. The Subaru Ascent and Kia Telluride are some of the most popular three-row SUVs, even though they're relatively new to the market. Their success can be attributed to many factors, including their capability, modern features, convenient amenities, and comprehensive safety packages.

This guide will go over the differences between the Ascent and Telluride. After reading this, a potential customer should hopefully have a better idea of which SUV would be the more strategic purchase.

Unlike some models in which multiple engines are offered, both the Subaru Ascent and Kia Telluride have only one option for the powertrain. In the Ascent, there's a four-cylinder engine with a displacement of 2.4 liters. In the Telluride, there's a V6 engine that has a displacement of 3.8 liters.

All Telluride models can tow up to 5,000 pounds. Most Ascent trims can tow that same amount, but the base model of the Subaru is only rated to tow 2,000 pounds.

The Telluride doesn't have standard all-wheel drive, but it is an option on every one of its trims. Like the Subaru's AWD system, the Telluride's AWD system can kick into gear at any point. It uses sensors to determine if there's an issue with traction, and if so, it can redirect power to the whees that can use it the most. If things are particularly challenging, a driver can lock AWD into place, and there's also a Snow Mode.

If the Telluride doesn't have AWD, it would have front-wheel drive. There are different drive modes that drivers can take advantage of, whether they have a FWD or AWD model. These four drive modes are Comfort, Eco, Sport, and Smart, and they allow for some customization in terms of how the SUV handles itself.

The Telluride doesn't have the downhill speed control system that the Ascent has, but it does have Hill Start Assist Control. If the Kia is stopped on a steep hill and needs to get moving again, the brakes can be held in place while the driver moves his/her foot from the brake pedal to the gas pedal.

Kia has given the Telluride an eight-speed automatic transmission. It has a Sportmatic system that drivers can use to have manual control over shifting. It can make a regular drive a little more interesting. The Ascent uses a continuously variable transmission that works in a similar fashion. It makes for a smooth drive, and if drivers ever want to be more in control, they can utilize the paddle shifters. These are standard across the lineup.

Kia's powertrain warranty is really generous. It's good for 10 years or 100,000 miles, so this should give shoppers a lot of peace of mind as they prepare to make an investment in a new vehicle. Subarus have proven to be reliable, so people can feel good about purchasing an Ascent as well. The powertrain warranty on the Ascent is good for five years or 60,000 miles.

Despite being on the larger side, these two SUVs handle no differently than smaller SUVs. The only difference might be that they may be a little harder to park. The Ascent is 196.8 inches long and 76 inches wide, and it sits fairly high off the ground with a ground clearance of 8.7 inches. The Telluride is one-tenth of an inch longer than the Ascent, and it's about two inches wider. Its ground clearance is eight inches.

Considering that they're so similar in their exterior dimensions, it would make sense that their interior dimensions are in the same general range. Leg room in the Subaru Ascent is 42.2, 38.6, and 31.7 inches in each of the three rows. This is comparable to the 41.4, 42.4, and 31.4 inches of leg room in the first, second, and third rows of the Telluride. The second row in the Telluride is definitely more spacious than that of the Ascent, and both models have smaller third rows that would be ideal for children.

The Ascent and Telluride can either have captain's chairs or bench seats in their second rows. With bench seats, these SUVs would have eight total seats. If captain's chairs are selected, then total seating capacity would go down to seven. The benefit of captain's chairs is that the cabin feels more open and people can have a bit more room to move around. It is especially helpful in giving passengers easier access to the third row.

Another aspect to consider is how the infotainment systems in these vehicles can enhance the overall driving experience. The base model of the Ascent has a 6.5-inch touchscreen with Android Auto, Apple CarPlay, Bluetooth, and SiriusXM. The other trims have eight-inch touchscreens and Wi-Fi capability. The Touring, which is the most premium trim of the Ascent, has integrated navigation and a Harman Kardon sound system with 14 speakers.

The touchscreens in the Telluride trims are larger than those in the Ascent. The first two trims of the Telluride have eight-inch touchscreens, and the top two are enhanced with 10.25-inch touchscreens. All models have smartphone compatibility and Bluetooth. Like what's seen with the Ascent, wireless charging and navigation, along with a Harman Kardon audio system with 10 speakers, can be found in the higher trims.

A rear-vision camera is standard in both vehicles. The top trim of the Ascent has a 180-degree front-view monitor, and the top trim of the Telluride has a bird's-eye-view camera that provides a 360-degree perspective.

With the Subaru Ascent, every trim has the EyeSight Driver Assist Technology package as well as automatic high beams. The driver-assist systems include pre-collision braking, adaptive cruise control, lane departure warning, and lane centering. These features can reduce the chances of frontal collisions and accidents resulting from drivers drifting out of their lanes. Most trims have blind spot monitoring and rear cross-traffic alert, and the the top half of the lineup has reverse automatic braking.

Adaptive cruise control is also found in every Telluride model. This program can be utilized on open stretches of highway. In addition to being able to maintain a set speed, the program can adjust the speed of the SUV if the leading vehicle slows down or speeds up.

Further, the Telluride comes standard with automatic emergency braking, forward collision warning, pedestrian detection, lane keeping assist, and lane departure warning. Notably, blind spot collision-avoidance assist and rear cross-traffic collision-avoidance assist are standard in every Telluride model. Not only can the Telluride warn drivers about problems related to rear cross traffic or vehicles in blind spots, but the SUV can also help people avoid hitting other vehicles. It can do so by correcting steering or braking. Two additional features that are standard in the Telluride are parking distance warning and driver attention warning. However, automatic high beams are only included with the top-level trim.

It's clear that the two companies have worked hard to integrate advanced safety components into their three-row SUVs. While Subaru has incorporated many impressive driver-assist technologies into the Ascent, Kia has put in even more features into its Telluride.

Taking a look at pricing will help potential customers determine which model has the better value. The Ascent starts out at $32,295, and its Premium trim costs $34,795. The Limited and Touring make up the top half of the lineup, and they cost $39,595 and $45,445, respectively.

With the top two trims of the respective models, the costs are definitely high. At this level, the Telluride is more affordable than the Ascent is, even though the Telluride has the more comprehensive technology package. The higher trims of the Telluride can keep people comfortable with heated and ventilated front seats and leather seats, and they have power sunroofs and smart power lift gates. In the Ascent, there can be all of those features, as well as heated second-row seats and a heated steering wheel.

These models are very close competitors in many ways. They have a similar configuration and dimensions that are nearly identical to each other, though the Telluride has the larger second row and rear cargo area. One has more horsepower than the other, but the opposite is true when looking at torque. Plus, their interior amenities are comparable, with many high-end features being offered.

Some of the biggest differences are in regards to safety and technology. In these areas, the Telluride wins the matchup. It has more components and a larger available touchscreen, and this will likely be noticed by many customers.

On average, the Telluride is cheaper than the Ascent is. The prices aren't very different for the lower trims of these SUVs, but there's more of a contrast when looking at the higher trims. This may drive some budget-conscious buyers toward the Telluride.

So far, it seems like the Telluride would be the better purchase. It certainly has a modern vibe and great benefits, but it can't be forgotten that the Ascent comes standard with all-wheel drive and is made by a company known for its reliability. The Ascent will do well partly based on name-recognition alone, and its practical and durable nature will give it a lot of appeal to some customers.