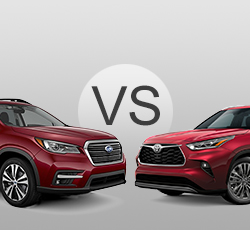 2021 Ascent vs Highlander - How do they stack up? Which is Better?

Three-row SUVs are popular with people who have large households and/or need space for all of their cargo. The 2021 Subaru Ascent and 2021 Toyota Highlander are some of the leaders in their field. Made by companies known for their focus on durability and safety, these models are capable, practical, and reliable. They both have so many features that modern consumers are looking for, especially in terms of technology. After reading this comparison of the two vehicles, a prospective customer should hopefully have a better idea of which one might be a better choice.

With the Ascent, there's only one choice for the engine. It's a 2.4-liter turbocharged engine with four cylinders. It comes with 260 horsepower and 277 pound-feet of torque, so there's definitely a solid amount of capability. The base model can tow up to 2,000 pounds, while the other trims have towing capacities of 5,000 pounds.

With the Toyota, there are two powertrain choices. The first uses a gas-powered 3.5-liter V6 engine. It's larger than the engine in the Subaru, but it doesn't have a turbocharger. It has 295 horsepower and 263 pound-feet of torque, and it's towing capacity is the same as that of the higher trims of the Ascent.

What will likely be a point of interest for some buyers is that the Highlander is available as a hybrid. The hybrid powertrain uses a 2.5-liter gas-powered engine and an electric motor. Net horsepower is 243, which falls slightly short of the mark that the Ascent has set.

Toyota has given customers the opportunity to choose whether they want their Highlanders equipped with front-wheel or all-wheel drive. In contrast, every Subaru Ascent comes standard with symmetrical all-wheel drive. It can be nice to have all-wheel drive, even in less-than-extreme conditions, because it can enhance traction when taking turns at higher speeds and when driving over the occasionally slippery patch of road. Obviously, if people have plans to hit the trails, they'll need all-wheel drive to keep them moving forward in a safe and controlled manner.

If anyone is headed into more difficult terrain, it may be helpful to have the Ascent's X Mode. This is a standard system on the Subaru that can be engaged to reduce wheelspin and optimize traction when it's especially difficult to grip the road or trail.

Before moving on to a different section, this overview should touch on the transmissions that these vehicles have. This may not matter to the casual driver, but those who have some knowledge of a vehicle's mechanical components work may be interested in hearing more.

The Subaru Ascent uses a Lineartronic continuously variable transmission. People can let the transmission handle all of the work, or they can engage the eight-speed manual mode through the use of steering-wheel-mounted paddle shifters if they want to have more control.

Each of these SUVs sits fairly high off the ground. The Toyota has a ground clearance of eight inches, while the Subaru sits 8.7 inches off the ground. This not only lets these vehicles clear obstacles, but it also gives their drivers high perches. Some people prefer sitting tall in their seats because it seems like it gives them better views of what's around them.

These aren't compact vehicles by any means. While they might not fit that easily in smaller parking spaces, they're both generally thought of as easy to maneuver. The length of the Ascent is 196.8 inches, and the length of the Toyota is pretty close, at 194.9 inches. They have exactly the same width, which is 76 inches.

How is all of that space utilized? In the Subaru, leg room is 42.2 inches in the front row, 38.6 inches in the middle row, and 31.7 inches in the third row. Maximum cargo room is 86.5 cubic feet when all the rear seats have been folded down. If longer items and passengers both need to be accommodated, people can simply fold down one side of the second and third rows.

A 6.5-inch touchscreen, which comes with smartphone compatibility and SiriusXM Satellite Radio, is standard in the Subaru. When moving past the base model, there's an eight-inch touchscreen. The middle two trims have the option of getting navigation, a program that's standard on the top trim. All of the trims, with the exception of the base model, have Wi-Fi capability.

People who think that size does matter when it comes to technology will be happy that the Toyota comes standard with an eight-inch touchscreen. The Highlander has the same features (Apple CarPlay, Android Auto, Bluetooth, and SiriusXM) that the Ascent has. Even the Toyota's base model has Wi-Fi capability through Toyota's Connected Services program. Plus, this Toyota SUV has Amazon Alexa.

On the higher trims of the Highlander, there could be a massive 12.3-inch touchscreen. This touchscreen has integrated navigation and is paired with a JBL speaker system. This system has 11 speakers, to include a subwoofer. The highest trim of the Ascent has a similar audio system. It has Harman Kardon components and has 14 speakers.

The Subaru and Toyota companies have focused a lot of attention on incorporating driver-assist technologies into their vehicles. The Ascent and Highlander both have impressive features that can actively work to keep people safe. Subaru's safety package is called EyeSight Driver Assist Technology, and Toyota's is called Toyota Safety Sense 2.5+. These packages are standard across the respective lineups.

With EyeSight Driver Assist Technology, the Ascent can sense if it's approaching another vehicle too quickly or is veering out of a lane. If so, the driver would be given an alert, and the vehicle would have the ability to hit the brakes or correct steering. With the adaptive cruise control and lane centering program, the Ascent could monitor its speed and steering on relatively quiet stretches of highway. Higher trims of the Ascent are enhanced with blind spot monitoring and rear cross-traffic alert, in addition to reverse automatic braking. The Touring trim of the Ascent has a 180-degree camera view showing the driver what's in front of the vehicle. This could be a big help when parking or maneuvering in tight spaces.

Many of the same features are found in the Toyota. The Highlander also has the ability to warn drivers about potential frontal collisions or when they're drifting to one side of a lane. It has mitigation abilities as well, so it can correct steering and/or hit the brakes if necessary to avoid an accident. One component that only the Highlander has is Road Sign Assist. With this technology, the vehicle can "read" road signs and then display them to the driver in the Multi-Information Display behind the steering wheel. This would serve as a gentle reminder to slow down or yield, for example.

Further, the top trims of the Toyota Highlander could have a bird's eye view camera. This would provide a driver with an all-around view of the vehicle and the objects around it.

Both of these vehicles are built around sturdy frames and have high-quality brakes that are ready to take action at any moment. These models are very comparable to each other in this regard. The exceptions are that the Ascent Touring has a 180-degree front-facing camera while the Highlander has Road Sign Assist and an available 360-degree camera.

A front-wheel-drive L trim of the Highlander costs $34,910, and the entry-level model of the Ascent costs $32,295. Neither vehicle is what anyone would consider cheap, though these prices are certainly reasonable given the size of these models and all of their amenities. If budget is going to be a primary factor for a potential customer, then the Ascent would win the matchup.

The Ascent has four trims. The base model has an attractive infotainment system and solid safety package, and it has cloth seats, a power rear gate, a climate system with three zones, and LED steering responsive headlights. The second trim available is the Premium, priced at $34,795. For this additional cost, one would get to enjoy heated front seats, a power-adjustable driver's seat, and a larger touchscreen.

Priced at $39,595, the Limited has many advantages. They include leather seats, 20-inch wheels, and LED fog lights. Heating elements are incorporated into the Limited's second-row seats and steering wheel for more comfort. Finally, the Touring tops off the list at $45,445. It has a power moonroof that can let in natural light, chrome exterior accents that shine, built-in navigation, and heated and ventilated front seats.

The description of the Highlander's lineup is much more involved, so this overview will simply provide some highlights of each trim. The L is pretty similar to the base model of the Ascent, the LE ($37,110) is upgraded with a power liftgate and LED fog lights, and the XLE ($39,910) treats people to a power moonroof and SofTex upholstery. The XSE ($41,505) has a sportier feel with its unique exterior accents and 20-inch wheels. The Limited ($43,865) and Platinum ($47,065) are quite sophisticated with leather upholstery, heated steering wheels, and advanced infotainment systems with navigation. The Platinum really stands out with its standard 360-degree camera view and power panoramic moonroof.

Keep in mind that the LE, XLE, Limited, and Platinum are all available as hybrids. In general, a hybrid would be about $1,500 more expensive than its traditional counterpart.

There certainly is some overlap when looking at the features of the 2021 Subaru Ascent and Toyota Highlander, but at the same time, they are distinct from each other in a few key ways. First of all, the Highlander is available as a hybrid. This is going to make the decision very clear for drivers looking to conserve gas.

Also, the Highlander is more powerful than the Ascent is, at least when looking at the horsepower generated by the traditional powertrains. Having some additional horsepower can be important to some drivers. On the flip side, remember that the Ascent has more torque than the Highlander does. Performance-minded customers will have to think carefully about what they prefer, but average drivers likely won't notice a difference between the two. Keep in mind that all-wheel drive is standard in the Ascent and optional with the Highlander.

If people plan on loading up their cabins with passengers, the Ascent would be the model to choose. This is because it has several more inches of leg room in its third row.