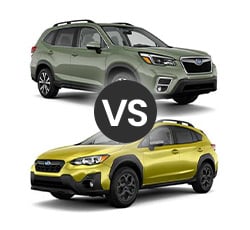 2021 Forester vs Crosstrek - How do they stack up? What are the differences?

The Subaru Crosstrek and Subaru Forester may share several things in common, but there are many differences between the two. Out of the two models, the Forester has the more traditional SUV appearance. It's a popular model amongst people looking for a spacious two-row SUV. The Crosstrek is commonly found on the roads as well, and it may be more appealing to customers who don't need anything too large but still want some versatility. This overview will give potential buyers a better idea of which Subaru would be a better fit for them.

With rounded edges, sturdy frames, and sporty stylings, the Forester and Crosstrek look fairly similar. However, the Forester is definitely the larger of the two. It has a length of 182.1 inches, making it almost six inches longer the Crosstrek. Also, the Forester is about half an inch wider and about five inches taller than the Crosstrek is. While both models have a ground clearance of 8.7 inches, it's clear that the Forester has more space to offer.

These Subarus can attract attention because of their cargo space. The Crosstrek has a rear cargo area that measures 20.8 cubic feet. When its rear seats have been folded down, its cargo capacity expands to 55.3 cubic feet. In the Forester, the rear cargo hold is significantly bigger, having a volume of 31.1 cubic feet. Folding down the back row gives the Forester about 70 cubic feet of storage space.

These vehicles have many of the same available features, such as LED fog lights, moonroofs, and side mirrors that have integrated turn signals. Both can ride on either 17- or 18-inch wheels.

In many ways, though, the Forester has nicer exterior elements. It can be enhanced with satin chrome side mirrors and a panoramic moonroof instead of a traditional one. In fact, almost all of the Forester trims come standard with the panoramic moonroof, whereas a traditional moonroof is only an option on even the most premium Crosstrek trim. Plus, all of its trims come with LED steering responsive headlights. In contrast, only two out of the five Crosstrek trims have these types of advanced headlights.

Three types of powertrain are available with the Subaru Crosstrek, but only one is offered with the Subaru Forester. The first of the Crosstrek engines is a 2.0-liter, four-cylinder engine. It's far from the strongest engine in the market, but it can do a decent job of getting people to where they need to be. It can make 152 horsepower and 145 pound-feet of torque. It typically comes matched with a six-speed manual transmission, but it can be used with a lineartronic continuously variable transmission if drivers don't want to be dealing with stick shifts.

The other traditional powertrain in the Crosstrek uses a 2.5-liter engine with four cylinders. With its larger displacement, it's able to generate more power. It comes with 182 horsepower and 176 pound-feet of torque, and this should lead to a more satisfying driving experience, especially when the vehicle is loaded down or climbing hills. This engine is exclusively available with a lineartronic continuously variable transmission. The Sport and Limited trims of the Crosstrek are the ones that have this type of powertrain.

With this engine, the Crosstrek would have SI-Drive modes. Intelligent mode would allow the vehicle to maximize fuel efficiency, Sport mode would lead to a more responsive engine, and Sport Sharp mode would be the most aggressive mode that some drivers may enjoy on occasion.

The last option with the Crosstrek is to get a hybrid powertrain. It uses a 2.0-liter engine in combination with an electric motor, and it has a net horsepower of 148. Keep in mind that because Subaru hasn't made too many Crosstrek Hybrids, they may be hard to find in some areas.

For those who plan on using their Subarus to tow cargo, they'll need to watch the weight of their cargo. The Crosstrek Hybrid has a towing capacity of 1,000 pounds, and all the other Crosstreks and all of the Foresters can tow up to 1,500 pounds. This isn't a tremendous capacity, but it is enough for some situations.

One thing that Subaru is known for is building vehicles with all-wheel drive. Both the Forester and Crosstrek come standard with symmetrical all-wheel drive, so this is a great bonus feature that many will appreciate. All-wheel drive can be useful when driving in slippery conditions, and it can also be useful on dry roads when cornering.

X-Mode and Hill Descent Control are two systems that can help people tackle rugged terrain. X-Mode enhances the all-wheel-drive capability of a vehicle, and Hill Descent Control limits the speed of the Subaru when its going downhill. This way, someone doesn't have to worry about riding the brakes so forcefully and can instead focus on steering. The top three trims of the Crosstrek and the top four trims of the Forester have these components as standard systems. The first two Crosstrek trims can be enhanced with these systems, at an additional cost.

Fuel efficiency can be an important factor these days, as there is more and more emphasis on conserving resources. The Crosstrek Hybrid does the best in this regard since it has a combined fuel economy of 90 MPGe. Even its regular combined mileage is estimated to be 35 miles per gallon.

With more interior amenities, the Forester feels like the more premium option. Its top trim has heated front and rear seats as well as a heated steering wheel. Its rear seatbacks can recline to provide passengers with more comfort, and those seats have a one-touch feature that makes quick work of folding them down when more cargo room ins needed. The top trim of the Crosstrek has an available heated steering wheel and it does have heated front seats, but those other features aren't available.

Another difference is that most trims of the Forester have power-adjustable front seats. In contrast, the Crosstrek only has a power-adjustable driver's seat. With both models, the lower trims have cloth seats, the middle trims have sport cloth or a synthetic material, and the two top trims have leather upholstery.

Of course, convenience and technology have a major influence on whether a new vehicle is nice enough to warrant a customer's attention. Fortunately, both Subarus have many impressive features.

First of all, automatic climate control is standard in the Forester and Crosstrek, and the Forester's two top trims have dual-zone climate systems. Further, almost all of the trims of each model have Wi-Fi capability. This means that people can stream audio and other media content, get work done, and browse the internet from the road.

In the lower trims of the Forester and Crosstrek, there are 6.5-inch touchscreens. They come with Apple CarPlay, Android Auto, and Bluetooth, which are all desirable systems. The smartphone connectivity, in particular, can really make things convenient.

The top two trims of the Crosstrek and Forester have eight-inch touchscreens. This may be a more desirable size because it makes it easier to read the text on the screen. The top trim of the Forester, which is the Touring, has integrated navigation and a premium sound system. Those two elements are only optional on the top trims of the Crosstrek.

A few other distinctions are related to the interior amenities. When compared with the Crosstrek, more trims of the Forester than the Crosstrek have automatic headlights and keyless access with push-button start. While most trims of each model have four total USB ports (two in the back and two in the front), the entry-level trim of the Crosstrek only has one front USB port in total. In comparison, the entry-level trim of the Forester has dual front USB ports.

More differences can be found when looking at the safety systems of these two Subarus. Only the Forester comes standard with high beam assist and EyeSight Driver Assist Technology. These components can be found in the Crosstrek, but only on the higher trims. High beam assist is included with the top two Crosstrek trims, and EyeSight Driver Assist Technology is standard on the top three Crosstrek trims and available on the lower two.

What exactly is this driver-assist technology package? Basically, having driver-assist technology means that one's vehicle can look out for potential problems and send out alerts and/or take action if something is troubling. Subaru's EyeSight Driver Assist Technology package consists of pre-collision braking to prevent frontal collisions, lane departure warning so that drivers can stay centered in their lanes, and adaptive cruise control. Adaptive cruise control allows the Subaru to adjust its speed if the leading vehicle has changed its pace. It's a step up from the traditional cruise control system in which a Subaru would maintain a certain speed, no matter what others are doing.

These Subarus have a few other safety features as well. They both have available reverse automatic braking, blind-spot monitoring, and rear cross-traffic alert, and they have standard rear vision cameras to make it easier to back up. Plus, the Forester has an available DriverFocus Distraction Mitigation System that can sense when drivers are looking remind drivers to pay attention to the road.

In many ways, the Forester has the advantage over the Crosstrek. It has the more comfortable rear seat, a larger cargo area, and more upscale interior and exterior features. However, it's more expensive, too.

For some customers, the extra cost of the Forester might not be worth it. Perhaps they don't need all the additional interior space, and maybe they're happy with the more limited offerings of the Crosstrek. On the other hand, there will be those who definitely want all of the extra benefits that come along with the Forester.

Save Money on a 2021 Subaru Forester:
Are you Shopping for a New Vehicle? Find the Best Deals with "Free - No Hassle" Prices Quotes.