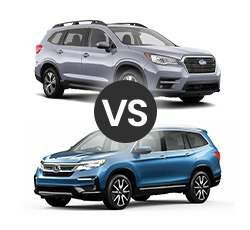 The Subaru Ascent and Honda Pilot both have three rows of seats, making them attractive to many potential buyers. They are fairly strong and capable, and they can definitely handle themselves well, even if the conditions aren't ideal. Subaru and Honda have put advanced technology and safety systems into place, and there are many convenient amenities found throughout the cabin.

Under the hood of a Subaru Ascent, there's a 2.4-liter, four-cylinder engine. It can deliver 260 horsepower and 277 pound-feet of torque, and it works in cooperation with a Lineartronic continuously variable transmission. Towing capacity on the entry-level trim is 2,000 pounds, but it's 5,000 pounds with the four others in the lineup.

What's really great about the Subaru Ascent is that it comes standard with symmetrical all-wheel drive. This gives it an advantage over many other SUVs. With other models, like the Honda Pilot, all-wheel drive is available on most trims, but customers would have to pay extra for that kind of capability. Only select trims of the Pilot have standard all-wheel drive.

The Ascent has X-MODE, a program that enhances traction even more. It reduces individual wheelspin by making precise adjustments right when any issues are detected. Some other programs that the Ascent comes with are active torque vectoring, trailer stability assist, and hill descent control. This last system is one that prevents the SUV from picking up too much speed when it's traveling down steep slopes.

Honda has given the Pilot a V6 engine. It has a displacement of 3.5 liters, and it can make 280 horsepower and 262 pound-feet of torque. Having a bit more horsepower and a little less torque kind of evens things out. With front-wheel drive, the Pilot can tow up to 3,500 pounds. If it has all-wheel drive, its towing capacity is increased to 5,000 pounds, matching what the Subaru can do.

Intelligent Traction Management comes with every Pilot. Front-wheel-drive models have a Snow mode that can be used in case of wintry road conditions. All-wheel-drive models have three modes, which are Snow, Sand, and Mud. This can be seen as comparable to the X-MODE on the Subaru Ascent, since it can be useful when the terrain is tough to deal with.

Honda has put in a nine-speed automatic transmission into the Pilot. All trims have paddle shifters, which some drivers like to use on an occasional basis. The Pilot has active noise cancellation to make the cabin a little quieter, and it has Hill Start Assist. Hill Start Assist can hold pressure on the brakes while the driver switches from the gas to the accelerator pedal, and it prevents the vehicle from rolling backwards during this short transition period. The Honda doesn't have trailer sway assist, but it does have a general vehicle stability assist program that can make adjustments to enhance control.

The Pilot also has an Eco Assist system. It can be used to optimize efficiency. If anyone is interested in getting an efficient vehicle, though, neither of these SUVs would be ideal. The Honda can either earn up to 20/27 (city/highway) miles per gallon or 19/26 miles per gallon, depending on whether it has front-wheel or all-wheel drive.

Fuel economy numbers aren't that different for the Subaru. The best it can do is 21/27 miles per gallon. There are many two-row SUVs that have hybrid options, but there aren't as many hybrid three-row SUVs in the market. At this point, neither the Ascent or the Pilot has this option.

These SUVs are on the larger side, but they're not too big for most drivers. They are just about the same size, with the Ascent being less than half an inch longer and about an inch taller than the Pilot. The Pilot is slightly wider, but the reality is that none of these discrepancies will make much of a difference.

Some people look specifically for vehicles that have a high ground clearance. This gives them a better ability to clear obstacles and drive over uneven terrain. On the other hand, sitting too tall off the ground can make it harder for children and people with mobility issues to get in and out of the cabin. The Pilot has a clearance of 7.3 inches. The Ascent sits higher off the ground, having a clearance of 8.7 inches, and this gives it a bit more of a rugged, athletic appearance.

With SUVs like these, the size of the cabin matters a lot. After all, people who are attracted to three-row vehicles need the interior space that they provide. Both SUVs have comfortable first and second rows, but they don't have the most space to offer in the back. Third-row leg room is only 31.9 inches in the Honda and 31.7 inches in the Subaru. It's probably best to save these seats for smaller riders or to only use them occasionally.

Cargo volume is another important factor to consider when thinking about how practical an SUV can be. The Honda Pilot has about 17 cubic feet behind its second row. This isn't too much space, but the rear seats can be lowered to expand cargo capacity. If all the rear seats are folded down, maximum cargo volume is about 84 cubic feet. This is a bit more than what the Ascent offers.

Behind the third row of the Ascent, there's a small cargo area that has a volume of about 18 cubic feet. Like that of the Pilot, this area is taller than it is deep, so this may affect how people can arrange their items. Lowering both the second and third rows can result in about 75 cubic feet of cargo space.

The cabin of a three-row SUV can feel more open if someone opts for a model with captain's chairs. In this case, there would be two chairs in the second row, with a small space in between them. Some people prefer this configuration, though it does reduce total seating capacity down to seven. The Ascent and Pilot offer this choice on select trims.

The other configuration would consist of a bench seat in the middle row, resulting in a total seating capacity of eight. It may be harder to access the third row if there's a second-row bench seat. To combat this, the Honda Pilot has one-touch second-row seats that can be quickly moved out of the way with the touch of a button. There are actually two buttons that can engage this feature; one is on the side of the seat and can be accessed when opening the door, and the other is on the back of the seatback so that third-row passengers can access it.

When discussing drivability, it's important to account for technology, since that does affect the overall experience. Both models come standard with Apple CarPlay, Android Auto, Bluetooth, and SiriusXM Radio, so there are many ways to stay entertained while on the road. The Pilot has an eight-inch touchscreen. With the Ascent, the first trim has a 6.5-inch touchscreen, and all the others have eight-inch touchscreens.

Both lineups have pretty impressive technology features. The more sophisticated trims of each model come with integrated navigation. The premium sound system on the Ascent has 14 speakers, while the premium audio system on the Pilot has ten speakers. Almost all trims of the Ascent have Wi-Fi capability, whereas less than half of the Pilot trims have this ability.

The Pilot does offer some unique things, though. It can have a multi-zone audio system that allows people in different rows to set their own volume. There's an available in-cabin PA system, which allows the driver to use the rear speakers to amplify his or her voice. There's also an available rear entertainment system. Younger passengers might love this the best, as it comes with a set of 10.2-inch screens that can stream certain apps, a Blu-ray player, and a pair of wireless headphones.

These days, safety packages utilize advancements in technology. It's impressive that both the Pilot and Ascent have driver-assist systems that can monitor situations, warn drivers about potential issues, and take corrective measures if deemed necessary to avoid accidents or to lessen any impacts.

The Pilot's safety package is called Honda Sensing. It comes with collision mitigation braking and road departure mitigation, giving the vehicle the ability hit the brakes or adjust steering when appropriate. This is in addition to forward collision alert and lane departure warning. It also features adaptive cruise control. Aside from Honda Sensing, the Pilot has blind spot monitoring, rear cross-traffic alert, and automatic high beams.

The Subaru's package is named EyeSight Driver Assist Technology. It has just about the same features found in the Honda Pilot. Four of the five Ascent trims have blind spot monitoring and rear cross-traffic alert; the entry-level trim does not have these systems, unfortunately. Three trims come with reverse automatic braking, and the top trim has an 180-degree front-view camera.

From a price perspective, the Subaru Ascent is the more attractive vehicle. Its entry-level version costs approximately $33,000. Modest price increases are associated with the trims higher up in the lineup, and the Touring tops things off with a cost of around $46,000.

In contrast, the Sport trim of the Honda Pilot starts things off with a cost of a little more than $38,000. Remember that this does not account for the additional cost associated with getting all-wheel drive. Every other trim costs more than $40,000, with the Elite costing about $50,000 and the Black Edition having a price of just under $52,000.

The Pilot does offer more amenities, as one would expect from its higher price. When comparing the most affordable versions of each vehicle, a few things jump out.

While the Pilot comes standard with heated front seats, blind spot monitoring, and a power-adjustable driver's seat, the Ascent does not. The Pilot also has LED fog lights and heated side mirrors, while the entry-level Ascent doesn't. Actually, none of of the Ascents have heated side mirrors. Further, almost all of the Pilots have power moonroofs, but only one Ascent trim has this component as a standard feature. With both models, the top trims can have heated and ventilated front seats, heated rear seats, and heated steering wheels. It's much more common to find leather upholstery in Honda Pilots than in Subaru Ascents.

With its higher ground clearance and standard all-wheel drive, the Subaru Ascent can be perfectly comfortable in rugged terrain. The Pilot does handle itself well, but it does feel a bit more refined and urban than its counterpart.

When it comes to price, there is a fairly stark difference. Out of these two choices, the Ascent will certainly be the more affordable one. For some buyers, the fact that the Ascent is several thousand dollars cheaper than the Pilot will be the most important factor. Since it has about the same capability and safety and technology packages that are more than descent, it seems like a smart purchase.

The Pilot has several higher-end elements, such as a rear-seat entertainment system and the one-touch second-row. Plus, leather seats as well as power moonroof are included on almost every trim. If anyone can afford to pay a little extra and prefers to have something that feels more luxurious, then the Pilot would be a strategic decision.