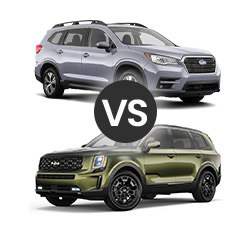 2022 Ascent vs Telluride - How Do They Stack Up? Which is Better?

A three-row SUV is ideal for families who need more passenger room and cargo space. This segment gives you several worthy models to choose from. However, the 2022 Kia Telluride and the 2022 Subaru Ascent definitely rank among the best options.

Many people are immediately drawn to the Kia Telluride’s head-turning exterior styling. Not only does the new Telluride look good, but it also boasts one of the segment’s most luxurious cabins. A great warranty package makes this SUV an even sweeter deal. This year, an additional number of high-tech features have been added to the SUV’s list of standard equipment.

The Subaru Ascent is a strong competitor in its own right. A standard all-wheel-drive system and good ground clearance make it a perfect match for snow-prone regions. A comfy interior also enables the Ascent to treat passengers to a pleasing drive.

Some car shoppers may have a tough time deciding between the 2022 Subaru Ascent and the 2022 Kia Telluride. Both of these models have some great attributes. In this head-to-head comparison, we’ll find out which vehicle is the better pick.

Subaru only offers the Ascent with one powertrain. Luckily, it delivers a satisfying level of performance. A turbocharger helps the SUV’s four-cylinder engine to squeeze out 260 horsepower and a significant 277 lb-ft of torque. Instead of a traditional automatic transmission, the Ascent uses a gearless CVT.

On the road, the Ascent feels quite potent. Virtually all the engine’s torque is available at a low rpm, which translates to effortless acceleration around town. This SUV can also get up to speed quickly when merging onto the interstate. Road tests show the Ascent is capable of hitting 60 mph in as swiftly as 6.9 seconds.

Kia goes a different route by equipping the Telluride with a V6 engine. It packs a robust 291 hp and 262 lb-ft of torque. An eight-speed automatic transmission helps promote a smooth and responsive performance.

While the 2022 Kia Telluride isn’t quite as quick as the Ascent, it still has plenty of get-up-and-go. It clocks a 0-60 mph time of around 7.1 seconds. Of these two SUVs, the Telluride has the better transmission. Test drivers rave about the intelligence of the Telluride’s transmission. Whether attempting to overtake a vehicle on the highway or hustling from one stop light to the next, the transmission seems to always select the most suitable gear.

Both of these SUVs have the same maximum towing capacity. They are rated to tow up to 5,000 pounds of cargo. However, only the Telluride offers a self-leveling rear suspension. When pulling a load, this feature helps keep the SUV more balanced. It also promotes a better ride when hauling extra weight.

When it comes to fuel efficiency, the Subaru Ascent has just a slight advantage over the Telluride. According to the EPA’s calculations, the Ascent will return 21 mpg in town and 27 mpg on the freeway. Every Ascent trim comes standard with Subaru’s Symmetrical AWD system. Regular unleaded gasoline is the recommended fuel.

When equipped with an AWD system, the Kia Telluride becomes a suitable adventure machine. While the Telluride’s Snow mode helps promote better traction during wintry conditions, activating the AWD Lock mode helps the SUV to perform better when venturing off the pavement.

The Ascent proves to be just a bit more adventurous. A higher ground clearance helps it to topple off-road obstacles and deep snow. Subaru also equips the Ascent with a nifty X-Mode system, which gives the SUV a more secure feel on rural trails. Hill descent control is built into the system.

Drivers will appreciate the Telluride’s strong braking system. It enables the SUV to stop quickly without experiencing any significant nosediving. During emergency braking tests, the Telluride recorded an average 60-0 mph braking distance of 118 feet.

The Subaru Ascent’s brakes are just as effective. When traveling at 60 mph, this SUV takes around 119 feet to come to a complete halt. It stops well on both wet and dry road surfaces.

In terms of reliability, the Telluride outclasses the Ascent. Evaluators give the Telluride an above-average rating in the dependability category. Unfortunately, some publications rank the Ascent among the segment’s least reliable models. Quite a few owners have encountered transmission issues. Furthermore, recalls were issued for the Ascent’s driveshaft bolts and a defective PCV valve.

The 2022 Kia Telluride is covered by a class-leading warranty. Its powertrain warranty lasts for up to 100,000 miles, which means drivers can worry less about engine and transmission problems. A 60,000-mile bumper-to-bumper warranty gives buyers even more protection. By comparison, Subaru covers the Ascent with a 60,000-mile factory powertrain warranty and a 36,000-mile bumper-to-bumper package.

Despite being the largest SUV in Subaru’s lineup, the new Ascent is not a challenge to drive. It offers respectable handling for a three-row family vehicle. Subaru’s all-wheel-drive system is designed with Active Torque Vectoring, thus helping to promote enhanced stability around corners.

The 2022 Kia Telluride has a sportier feel. Its body doesn’t lean as much when taking curves. A well-weighted steering system makes the Telluride even more satisfying to drive.

Both of these SUVs offer a comfy ride. Like the Telluride, the Ascent does a good job of absorbing potholes and rough road surfaces. However, some automotive reviewers describe the Ascent’s ride quality as being a bit more choppy. The Telluride soaks up the road more like a genuine luxury vehicle.

In regard to outward visibility, the 2022 Subaru Ascent definitely ranks among the best models in the segment. Drivers can look in all directions without encountering any serious blind spots. Big windows also enable the Telluride to offer impressive outward visibility. Drivers will be able to obtain a full view of the road ahead.

Expect the Ascent’s cabin to remain quiet in most conditions. However, it does allow more road noise to come inside. Folks who prefer a luxury-car-quiet cabin will lean more towards the Telluride. This SUV’s well-insulated interior does a fine job of muffling outside commotion. Even when traveling at fast highway speeds, the Telluride’s cabin remains noise-free.

These two rivals can both accommodate up to eight passengers. However, the Telluride’s second-row seats provide an extra 3.8 inches of legroom. This is a big advantage for drivers who often travel with adult-sized family members.

While there’s an extra 0.8 inches of front legroom in the Ascent, most drivers will comfortably fit behind the wheel of the Kia Telluride. These SUVs offer a similar amount of rear legroom. However, more shoulder and hip space give the Ascent’s third row an advantage. On the other hand, third-row entry in the Telluride is less challenging.

Tri-zone automatic temperature control is a standard convenience on both vehicles. Upgraded creature comforts are available for folks who desire more luxury on the road. However, only the Telluride offers ventilated second-row seats. Premium Nappa leather upholstery is also exclusively available on the Telluride.

When traveling with a full load of passengers, the Telluride provides the most cargo space. However, flipping down the Ascent’s third-row seat increases its cargo space to 47.5 cubic feet. This is virtually the same amount of storage room found behind the Telluride’s second row.

For the 2022 model year, the Telluride now comes standard with a larger 10.25-inch HD touchscreen. Not only does this interface have sharp graphics, but it’s also a breeze to use. Smartphone integration is quick and uncomplicated. Drivers can adjust the climate and stereo settings using physical buttons. However, some drivers may have to stretch their arms to reach certain controls.

While the Ascent’s infotainment unit is also easy to operate, its standard 6.5-inch touchscreen is significantly smaller. Ascent buyers move past the base model in order to enjoy a larger 8.0-inch touchscreen.

A few exclusive safety features are offered on the Telluride, such as Kia’s excellent blind-spot view camera system. When activating the SUV’s turn signals, this system displays live video of approaching vehicles. The task of switching lanes will be even more secure. Safe Exist Assist is found on every new Telluride, which is designed to prevent kids from opening doors into oncoming traffic.

Neither SUV offers an automated parking system. However, the Telluride can be upgraded with a bird's-eye-view camera. While the Ascent’s optional front-view camera is not quite as effective, it does help drivers to navigate around obstacles when parking.

Prices for the entry-level Kia Telluride LX begin at around $34,345. By comparison, Subaru lists the base Ascent with a starting price of $34,470. Because of Kia’s much lengthier warranty, the Telluride provides to be the best long-term value.

Drivers who demand the utmost luxury will be comparing the Telluride SX and the Ascent Touring. While the Telluride SX has a starting MSRP of around $42,700, Kia’s optional SX Prestige package tacks on an extra $2,300. A few of the fully loaded SX trim’s niceties include Nappa leather seating surfaces, heated/ventilated second-row captain’s chairs, a head-up display, and dual sunroofs.

The Ascent Touring has a starting price of slightly less than $46,000. While the Ascent Touring does benefit from a standard AWD system, it doesn’t feel quite as upscale as the Telluride SX.

Both of these three-row SUVs deserve some serious consideration. Like the Telluride, the Ascent provides a comfortable atmosphere for passengers. However, it does not feel as luxurious as the Telluride. A far more impressive standard infotainment system and a much longer warranty also help make the Telluride a better value. Car shoppers should also consider the Telluride’s higher reliability rating.

When it comes to performance, it’s a close match between the 2022 Kia Telluride and the 2022 Subaru Ascent. However, an available self-leveling rear suspension gives the Telluride an advantage in terms of towing. Although the Ascent may be a tad better at tackling rural terrain, Kia’s versatile family hauler isn’t too far off the mark.

The Subaru Ascent is a good pick. However, it loses this head-to-head clash to the Kia Telluride. Kia’s largest SUV offers more value, feels more luxurious, and arguably has a cooler look.