2022 Subaru Ascent Pros vs Cons. Should You Buy? 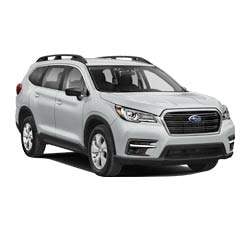 Should You Buy a 2022 Subaru Ascent? Here Are Some Reasons For and Against

The Ascent is Subaru's largest SUV, and it stands out because of its three rows of seats. Just like the other SUVs in the Subaru lineup, the Ascent has a solid engine and standard all-wheel drive, along with modern technology and advanced safety systems. These are basically the hallmarks of what makes Subaru a well-known brand. All of these features make the 2022 Subaru Ascent an intriguing choice for customers who need its cabin space.

For the most part, things remained unchanged as the Ascent moved from the 2021 to the 2022 model year. However, there is one important difference. There's now a new trim called the Onyx Edition. It's based on the Premium trim, and it's been enhanced with 20-inch wheels, black exterior accents, a heated steering wheel, and a few other high-end elements. It sits in the middle of the trim lineup, and it'll be the one to pick if anyone likes its more aggressive style.

Under the hood of the 2022 Subaru Ascent, there's a 2.4-liter turbocharged engine. This engine handles itself well, as it can crank out 260 horsepower and 277 pound-feet of torque. This amount of power gives the SUV a good amount of kick. Acceleration is quick, even if the SUV is weighed down with passengers or cargo. Subaru has given this model a Lineartronic continuously variable transmission, and if the driver wants to, he/she can use the paddle shifters to take control.

Subaru is known for making durable vehicles, and the Ascent is no different. Every one of the five Ascent trims has symmetrical all-wheel drive. They also have X-MODE, which gives them an even greater ability to handle rough terrain. When the Ascent detects any issues with grip, it makes the necessary adjustments so that it can stay in control. The base trim can tow 2,000 pounds, and all the others can tow up to 5,000 pounds.

3. Fits Up to Eight Passengers

The size of the Ascent is what's going to attract a lot of attention from prospective buyers. Its middle row can be set up with a bench seat so that it can fit three people. The third row is also configured as a bench, giving the Ascent a total seating capacity of eight. Several trims come with the option to get captain's chairs in the second row, which would bring seating capacity down to seven but make the cabin feel more open. Leg row in the second row is generous, at 38.6 inches, and in the third row, there's almost 32 inches of leg room.

LED steering responsive headlights are standard on the Ascent. These lights can help drivers see around corners and bends in the road at night. They're able to do so because they can turn in the direction the vehicle is turning. In addition, many trims have LED fog lights to help with visibility.

The cabin of the Ascent is comfortable and nicely appointed. Up front, there can be heated and ventilated front seats. Three trims have heated steering wheels, which can be very much appreciated in the colder months. The second-row seats can be heated, too, so passengers can stay warm and happy. Other features that are nice to have are reclining second-row and third-row seats and air vents in all three rows.

Leather seats are available on the Subaru Ascent. This can really bring up the level of sophistication in the cabin. Along with leather seats, the SUV can have woodgrain-patterned accents and Ivory leather accent trim on its dash and doors. The auto-dimming rearview mirror can come with a rear-vision camera display, meaning that it can show a live video feed of what's behind the vehicle.

These days, people generally expect to be able to stay connected to their networks wherever they go. The Ascent makes it easier to do so when traveling, as it has Apple CarPlay and Android Auto as standard components. SiriusXM and HD Radio are standard as well. The base trim has a 6.5-inch touchscreen, while all the others have eight-inch touchscreens and Wi-Fi capability. Navigation is standard on the top trim and available on two others, and this can be so useful when trying to figure out an efficient route when driving in unfamiliar territory.

8. Looks Out for Trouble

Subaru has equipped the Ascent with EyeSight Driver Assist Technology. This safety suite provides drivers with lane departure and sway warning, pre-collision braking when a frontal collision is imminent, and adaptive cruise control that comes with lane centering. It's so great that the Ascent can watch out for a variety of issues and warn drivers about them, and it's even better that it can take corrective measures. Several trims are equipped with more safety systems, including blind spot monitoring, rear cross-traffic alert, and reverse automatic braking.

The Ascent is tall and muscular, so it looks like it belongs out on the trail. It sits on either 18-inch or 20-inch wheels, and its raised roof rails add to its athleticism. The size of the Ascent gives it a lot of credibility as an SUV that's been designed for tough work.

Subaru has given customers five choices for trim. The range of prices is reasonable, and there's something for the budget-friendly as well as a few trims that will appeal to those with more money to spend. While there really aren't any differences in terms of mechanical components, there are fairly significant upgrades that the higher trims have. People will get to decide whether those upgrades are worth the extra cost, and having a choice is always appreciated by consumers.

Reasons Not to Buy a 2022 Subaru Ascent – The Cons

At its best, the Subaru Ascent can earn 27 miles per gallon on the highway and 21 miles per gallon in the city. These numbers aren't bad, but they could be better. This is especially true since there are more hybrid models being introduced to the market each year. Many automotive companies have figured out how to combine power and efficiency, but Subaru hasn't yet given the Ascent an available powertrain that goes easy on fuel consumption.

The Touring trim has a 180-degree front-view monitor, but it doesn't have any type of camera view that gives the driver a 360-degree perspective of how they're doing. Some competitors that are in the same general price range as the Ascent do offer this option, which many people will find useful when parking.

3. Not Much Extra Flair

The Ascent looks strong and athletic, but it's far from being the most aggressive-looking vehicle out there. The Onyx Edition does have some stylistic details that stand out, such as Crystal Black Silica-finish side mirrors and 20-inch black-finish wheels, but that's pretty much it. It doesn't have any type of special grille, front fascia, or exterior badging like what's seen with sportier versions in some other SUVs. Even the Subaru Forester and Outback have Wilderness trims that have bold and striking exterior components.

There's quite a bit of demand for three-row SUVs now, so it makes sense that there are many competitors to the Ascent. Some were around well before the Ascent came out, while others are a bit newer. Here's how the Ascent stacks up against some similar models.

Price is a big factor when it comes to buying a vehicle, and it should be noted that the Honda Pilot is more expensive than the Ascent is. It doesn't come standard with all-wheel drive like the Ascent does, either. If all-wheel drive were to be added on, that would make the entry-level Pilot more than $8,000 more expensive that the base trim of the Subaru. The two trims have comparable dimensions and power, so it might be hard for some buyers to justify that extra cost.

The Toyota Highlander has a lower initial cost than the Honda Pilot does, but it's still a bit more expensive than the Subaru Ascent is. All-wheel drive is an option on this Toyota SUV, but it's not standard on all trims. Cargo volume is a little greater in the Ascent than it is on the Highlander, too, and this could be important to some prospective customers who need to take advantage of every inch of the cabin.

Because of all of its features, as well as its relatively low cost, the 2022 Subaru Ascent would be an excellent choice for anyone in the market for a large SUV. It has a good amount of interior space, and it's certainly going to be a smart pick for those who care about safety and reliability. Its entry-level trim will appeal to those who want to stick to a certain budget, and its higher trims can satisfy customers with more upscale tastes.

View Pros and Cons for other Subaru Models: