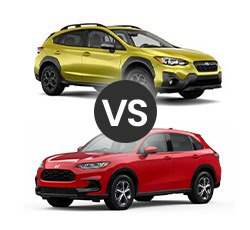 Small SUVs and crossovers have become very popular, and the Honda HR-V and Subaru Crosstrek are two great options. They're affordable, making them a practical choice for many consumers, and they can come with advanced technology and convenient amenities. They're not particularly strong or athletic, but they do well enough in this regard to catch the eye of many potential buyers.

The Subaru Crosstrek has three different powertrains to choose from. The first option is a 2.0-liter, four-cylinder engine. It can make 152 horsepower and 145 pound-feet of torque. This engine comes standard with a six-speed manual transmission, but there's the opportunity to have it paired with a Lineartronic continuously variable transmission in case a customer prefers not to drive a stick.

Another available engine is slightly larger, having a displacement of 2.5 liters. It also has four cylinders, and it's able to make 182 horsepower and 176 pound-feet of torque. A manual transmission is not available with this engine. Rather, it just sticks with a continuously variable transmission.

The last powertrain to think about is a hybrid one. The Crosstrek Hybrid is actually a plug-in hybrid, and it uses a 2.0-liter gas-powered motor along with an electric motor. Total system horsepower is 148. The hybrid is not quite as powerful as the others. It offers a towing capacity of 1,000 pounds versus the 1,500-pound towing capacity that the other engines provide.

Obviously, the real benefit of the Crosstrek Hybrid is its efficiency. It has an estimated combined fuel economy of 90 MPGe, and Subaru estimates that it can run on electric power alone for about 17 miles. For some people, this is more than sufficient for running errands around town or going to work or school each day. They can then plug in the vehicle when they're home for the night to recharge the battery. When traveling for longer distances, the gas-powered engine kicks in and can be relied upon. In hybrid mode, estimated fuel economy is 35 miles per gallon.

The Honda HR-V only has one engine to offer. It's a 1.8-liter engine with four cylinders. Since it's smaller than the one found on the Crosstrek, it makes sense that it's not as capable. It can generate 141 horsepower and 127 pound-feet of torque, which isn't that impressive but should be just fine for an average driver who mostly sticks to paved streets.

Honda has matched the engine with a continuously variable transmission, which has Sport mode to liven things up a bit. Most trims have paddle shifters mounted on their steering wheels to give drivers a little extra control, if they want to use it.

Many people are aware that most Subarus come standard with all-wheel drive. Fortunately, the Crosstrek is one of the models in the company's lineup that is equipped with all-wheel drive. The system is ready to make adjustments in order to maintain or improve traction. X-MODE can enhance traction even more, and it's standard on three out of the five trims and available on the others.

With the HR-V, all-wheel drive is available instead of being standard. It's available across the lineup, but it does cost about $1,500 more. Anyone who sometimes drives in snowy or icy weather would definitely benefit from having all-wheel drive.

The HR-V isn't really a great vehicle for towing, but neither is the Crosstrek. The Honda can handle 1,100 pounds if it's properly equipped.

These two models feel agile and are very easy to park and maneuver. The Crosstrek is 176.5 inches long, with a wheelbase of 104.9 inches. It has a pretty high ground clearance of 8.7 inches, which might be a little surprising since it doesn't necessarily seem like a vehicle that's very tall. The HR-V is only 170.4 inches long and has a slightly shorter wheelbase. It has less ground clearance, too. Front-wheel-drive models sit 7.3 inches off the ground, and all-wheel-drive models have a clearance of 6.7 inches.

A few things enhance the driving experience with the HR-V. The first is hill start assist, which keeps the vehicle stopped when on a slope. This can prevent the vehicle from rolling backwards before it's gained enough momentum to start moving forwards. The other feature is active noise cancellation. It's included on three out of the four trims, and it makes the cabin feel much quieter and more peaceful.

In contrast, the Crosstrek has hill descent control. This is available on select trims and standard on the others. When engaged, it can limit speed so the driver doesn't have to ride on the brakes.

The amount of space in a crossover or SUV affects its practicality. The Crosstrek and HR-V aren't huge, but they should work for many people. They both have two rows of seats with room for a total of five.

In the Crosstrek, there is 43.1 inches of front-row leg room and 36.5 inches of second-row leg room. In the back of the cabin, the cargo hold has a volume of 20.8 cubic feet. By folding down the rear seats, cargo capacity can be expanded to 55.3 cubic feet.

The Crosstrek Hybrid has to accommodate some extra components as part of its special powertrain, so it doesn't have as much cargo space. It has 15.9 cubic feet of cargo volume behind its rear seats, and when those seats have been lowered, its maximum cargo capacity is 43.1 cubic feet.

Honda's HR-V does much better when it comes to passenger space. It has 41.2 inches of front-row leg room and a very generous 39.3 inches of second-row leg room. This is on par with what many larger vehicles have to offer. Adults, teens, and taller children riding in the back will certainly appreciate having so much space to stretch their legs. The fact that the HR-V has more second-row leg room than the Crosstrek may be a little surprising since the Crosstrek has a greater length.

When the HR-V's rear seats are up, cargo volume is 24.3 cubic feet. Folding down the rear seats is easy, and it results in a total of about 58 cubic feet of cargo space.

There's a surprise feature that the HR-V has. It's called a second-row Magic Seat. While it's not really magic, it is interesting because has a few different configurations. When passengers aren't sitting in these seats, they can be folded down, or the actual seat part can be flipped up so that it is against the seatback. This creates a cargo area that's about four feet tall.

Finally, technology plays a role in the driving experience. With modern features, it can be very easy to stay entertained and stay in touch with others while traveling.

Subaru has given each of its Crosstrek trims a touchscreen along with Apple CarPlay, Android Auto, and Bluetooth. Its first three trims have 6.5 inch touchscreens, with the top two having eight-inch touchscreens, available navigation, and an available Harman Kardon sound system with eight speakers. Every trim except the entry-level model have SiriusXM as well, and they have six speakers and Wi-Fi capability. The first trim just has four speakers.

The not-so-great news is the the Honda HR-V doesn't come standard with Apple CarPlay and Android Auto, nor does it come standard with a touchscreen. The first trim in the HR-V lineup, which is the LX, only has a five-inch LCD screen and Bluetooth. The Sport, EX, and EX-L trims, however, do have smartphone compatibility and seven-inch touchscreens. In addition, they have Pandora radio compatibility and an SMS text message function. The EX and EX-L further benefit from having SiriusXM and six-speaker sound systems.

To keep devices charged, it's always nice to have access to a USB port. The Honda comes standard with one USB port in the front row. Three out of the four available trims have an additional USB port.

The same is mostly true for the Crosstrek. Its entry-level trim has one USB port, and all of the other trims have two USB ports up front. Three trims also have two more USB ports in their second row, which passengers would easily be able to utilize.

Given the increasing prevalence of driver-assist technologies, modern consumers generally have high expectations when it comes to the safety packages in new vehicles. Subarus and Hondas are known for being safe and reliable, but do these more affordable models have enough features to please potential buyers?

Subaru's EyeSight Driver Assist Technology suite comes with several systems. They include forward collision alert and the corresponding emergency braking feature. They also offer lane departure alert and adaptive cruise control with lane centering. The important thing to note is that this safety suite is standard on the top three trims and available on the bottom two.

Honda has taken a somewhat similar approach with the HR-V. Unlike some of the more expensive models in the company's inventory, the HR-V doesn't come standard with driver-assist systems. In fact, the first two trims don't even offer the option to get any of these features. They do, though, have anti-lock brakes, tire pressure monitoring, and a rearview camera.

The top two trims, in contrast, do come standard with more advanced mechanisms. The same type of equipment found on the Crosstrek's higher trims is found on these trims, including adaptive cruise control, forward collision warning, and lane departure warning. These trims even take it one step further by having road departure mitigation and lane keeping assist, meaning that they can correct steering if necessary.

Plus, the top two HR-V trims have a program called Honda LaneWatch. It displays a live video feed of any vehicles in the SUV's right-side blind spot. It uses a camera that has been mounted on the bottom of the passenger-side exterior mirror.

The HR-V is the more affordable vehicle. It has a starting price of $21,870, but remember that this doesn't include all-wheel drive. Also keep in mind that the entry-level HR-V doesn't have a touchscreen, smartphone compatibility, or driver-assist technology. The base trim of the Crosstrek costs a little more than $23,000, and it does have several more elements, including automatic climate control.

The HR-V EX-L has some similar benefits. It, too, has heated front seats and leather upholstery. It comes standard with a moonroof, which is only an option on the Crosstrek. The EX-L does not have a power-adjustable driver's seat, and it rides on 17-inch wheels.

Then, there's the Crosstrek Hybrid. Since this is a plug-in hybrid, it costs much more than the others. It has a starting price of about $36,000. Subaru has given the hybrid the same type of exterior and interiors features that are found on the Limited, for the most part.

These are two excellent choices, with the Honda HR-V being more suited for those on a limited budget. In addition, it's more ideal for those who need more interior space.

On the other hand, the Subaru Crosstrek will appeal to people with its greater capability as well as the fact that it's available as as hybrid. Subaru has done a good job of giving the Crosstrek an advanced infotainment system and available driver-assist technologies.

When looking at the more premium trims, the two models are very comparable. It may come down to interior size and style, with the Outback being slightly more rugged than the HR-V is.