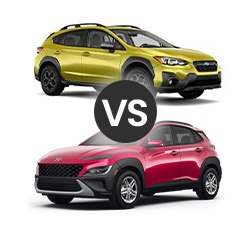 SUVs are very popular, but not everyone needs something that's big and spacious. For some buyers, versatility and cargo space are things that are important to them, but efficiency and affordability are key factors as well. The Subaru Crosstrek and Hyundai Kona are two compact crossovers that are nice options that have a great combination of features.

There are two main engine options for the Hyundai Kona. The first is a 2.0-liter, four-cylinder engine that can make 147 horsepower. It comes with 132 pound-feet of torque. This engine is paired with a continuously variable transmission, and it's found on the first two trims, which are the SE and SEL.

The N Line and Limited make up the top half of the lineup. They get to have turbocharged engines. One of these engines has four cylinders as well, and it has a displacement of 1.6 liters. It's able to generate 195 horsepower and 195 pound-feet of torque, so it's definitely a step above the standard engine. Hyundai has paired this engine with a seven-speed dual clutch transmission. This can make the vehicle feel a little more spirited.

All-wheel drive is an option with the Kona. It does cost a bit extra, but for some, it'll be worth it because it offers much more control when the conditions are tough to deal with. In contrast, the Subaru Crosstrek comes standard with all-wheel drive. This is something that Subaru is known for, and it gives its vehicles an edge over some other vehicles in a competitive market.

Like the Kona, the Crosstrek comes with two main engine options. The basic engine is a 2.0-liter, four-cylinder version. It provides the vehicle with 152 horsepower and 145 pound-feet of torque. The other choice is a similar engine that has a displacement of 2.5 liters. It brings horsepower up to 182 and increases torque to 176 pound-feet.

Now, it's important to mention that there are some other versions of the Kona and Crosstrek that are available. The Crosstrek can have a plug-in hybrid powertrain, and the Kona can be an all-electric model as well as a performance-oriented one. This overview will briefly go over these options but will then concentrate on the models with traditional powertrains.

The plug-in hybrid Crosstrek uses a 2.0-liter engine and an electric motor. It has a net horsepower of 148, and it has an estimated fuel economy of 90 MPGe. It can travel up to 17 miles on electric power alone. The Kona Electric has an estimated range of 258 miles and can churn out 201 horsepower. Finally, the Kona N Performance is impressive with 276 horsepower and 289 pound-feet of torque. It's quite sporty and a lot of fun to drive.

With their somewhat compact sizes, the Crosstrek and Kona feel pretty nimble. This is especially true with the turbocharged engine on the Kona. The Kona is noticeably shorter than the Crosstrek is; this may or may not be a good thing, depending on a customer's preferences. The Kona measures about 166 inches long, while the Crosstrek is almost 177 inches long.

The width and height of the vehicles fall within the same range, but there's another discrepancy that has to do with their dimensions. The Subaru Crosstrek might not look like it's particularly high off the ground, but it actually has a ground clearance of 8.7 inches. This is similar, or even higher, than the ground clearance of some bigger SUVs. In contrast, the Kona sits 6.7 inches off the ground. This may affect its ability to travel over uneven terrain.

Given all of this information, it makes sense that the Crosstrek offers more interior space than the Kona does. The Subaru crossover has 36.5 inches of rear-seat leg room, which isn't too bad. The Hyundai has 35.2 inches of leg room in its back seat. Anyone who plans on having taller passengers ride with them on a fairly frequent basis will have to keep this in mind.

Technology plays a key role, too. Consumers are used to having high-tech equipment at their disposal, and the standards have been raised considerably over the past several years. Both the Kona and Crosstrek have some nice features.

The Kona starts off with an eight-inch touchscreen. This screen comes along with Android Auto, Apple CarPlay, and Bluetooth, so it's easy to play music and make phone calls or receive texts while driving. A pair of USB outlets in the front row is standard.

When moving up in the lineup, one starts to see more intriguing features. The higher trims can have 10.25-inch touchscreens with navigation, and they can have Harman Kardon premium sound systems with eight speakers. Dynamic voice recognition, rear USB outlets, and SiriusXM are also included with the package on the more premium Hyundai Konas.

Thing are pretty comparable with the Subaru Crosstrek. Its first three trims have 6.5-inch touchscreens, Bluetooth, and smartphone compatibility. A difference is that almost all Crosstrek trims have SiriusXM satellite radio, and another important thing to mention is that all trims, except the entry-level one, have Wi-Fi capability.

There's one more cool feature that the Hyundai Kona can come with. It's called Hyundai Digital Key. It allows a smartphone to be used in place of a key fob. The vehicle can be programmed to recognize the presence of a specified smartphone, and then the actual key fob can be left behind while someone goes off on an outing. It can be useful in various situations, including when someone might be planning an active adventure and doesn't want to have to carry a phone plus a key.

Hyundai and Subaru have both done excellent jobs in building safe and reliable vehicles. Having standard all-wheel drive and traction control can really make it easier to keep the Crosstrek under control. Though the Kona doesn't have standard all-wheel drive, it does have some stability enhancement programs that can help in different scenarios.

Driver-assist technology is something that people almost expect to see in modern vehicles. Every trim of the Kona has monitoring and mitigation programs in place, and they're ready to take action when necessary. The Kona can sense when it's veering out of lane and can correct its steering. In addition, it knows when it's approaching a pedestrian or vehicle too quickly. If so, it can warn the driver and hit the brakes. Further, it comes standard with a driver attention warning program that helps make sure that people are focused on the roads.

Higher trims of the Kona have adaptive cruise control and safe exit warning. They also have bind spot monitoring and the corresponding mitigation system that can correct steering and alert the driver when he/she shouldn't be changing lanes. Likewise, higher trims have a mitigation program that goes along with rear cross-traffic alert. Pressure to the brakes can be applied when it appears that a driver is about to back up into an oncoming vehicle.

Unlike some other vehicles in Subaru's lineup, the Crosstrek does not come standard with a suite of driver-assist technologies. Its advanced safety package, which is called EyeSight Driver Assist Technology, is only standard on the top few trims. The first two trims offer the option of getting it, but it would require an additional fee. The EyeSight safety package includes automatic emergency braking, adaptive cruise control, and lane departure warning.

Higher trims of the Crosstrek can have blind spot detection and rear cross-traffic monitoring. These aren't standard on any trim but the Limited (and the hybrid). It's option on the middle two trims, and it's not offered on the first one in the lineup.

Another safety component to mention is automatic high beams. Both the Crosstrek and Kona offer these types of lights on their higher trims. They can turn on automatically if no oncoming headlights or streetlights are detected, and then they turn off once it seems like others are around the vehicle.

The Kona has a lower starting price than the Crosstrek does. The Kona starts out with a cost of $21,300. Its Limited trim, which has LED headlights, a power sunroof, and leather seats, costs $28,600. This is still a really reasonable cost considering all of the advanced technology that it comes with.

It seems as if the Kona offers a bit more in terms of amenities, but in reality, it's a very close match-up.

Slight differences in style, size, and performance will likely affect people's decisions. The Kona is smaller, and its turbocharged engine is more powerful than what the Subaru offers. It may be more appealing to those who like compact, sporty vehicles and want to have a lot of high-tech equipment, both for entertainment purposes and for staying safe.

On the other hand, the Crosstrek sits higher off the ground and has more cargo space than the Kona has. It has standard all-wheel drive, too. For these reasons, it may be more practical for buyers who plan on loading up their cabins with cargo and for those who know they're going to run into some slippery roads on occasion.

It's great that both companies have come up with a good range of trim options. The base trims of these vehicles are very affordable and feel fairly advanced with their touchscreens and smartphone capability. Higher trims have more luxurious elements to offer.