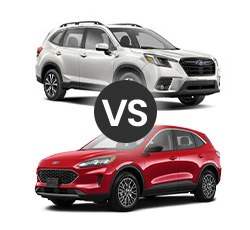 2022 Forester vs Escape - How Do They Stack Up? Which is Better?

There are so many compact SUVs on the market that it can be hard to tell them apart. The exploding popularity of this segment of the market can be explained by its blend of efficiency and capability. These factors help compact SUVs appeal to individuals, couples, and small families.

The 2022 Subaru Forester is a unique offering in this vehicle class. It is currently in its fifth generation, and it debuts an off-road-oriented Wilderness model this year. The Ford Escape launched its fourth generation in 2020, and it makes only minor changes in 2022. Both of these are considered well-made vehicles, but they have different strengths. In the following guide, differences will be highlighted so that shoppers can decide between the 2022 Forester and the 2022 Escape.

All models of the 2022 Forester come standard with all-wheel drive. They also come standard with a 2.5L four-cylinder engine that can make 182-horsepower and 176 lb-ft of torque. This engine is paired to a continuously variable transmission. Most trim levels can handle up to 1,500 pounds when it comes to towing, although the Wilderness can go up to 3,000 pounds. There is no optional engine upgrade for the Forester this year.

There are far more performance options when it comes to the new Escape. The standard engine is a turbo 1.5L three-cylinder that makes 181-horsepower and 190 lb-ft of torque. It is paired with an eight-speed automatic transmission. The Titanium model comes standard with a 2.5L hybrid powertrain that creates 200-horsepower total. For this engine, Ford goes with a continuously variable transmission.

Both of those engines can be had in front-wheel or all-wheel-drive models. A turbocharged 2.0L four-cylinder is also available, and it comes exclusively in AWD Escapes. This powertrain pumps out 250-horsepower and 280 lb-ft of torque. Properly equipped Escape models can tow up to 3,500 pounds.

Thanks to its standard three-cylinder engine, the Escape gets excellent fuel economy. The front-wheel-drive models with the base engine get 28mpg in the city and 34mpg on the highway. Going with all-wheel-drive instead will drop these numbers down to 26mpg city and 31 mpg highway, which is not as efficient as the Forester. With the turbocharged engine, the Escape is estimated to get 22mpg city and 31mpg highway.

With its hybrid powertrain, the Escape is estimated to get 44mpg in the city and 37mpg on the highway. As for the plug-in hybrid version, it gets 100 MPGe combined. It has an all-electric range of 37 miles.

Warranty coverage for the 2022 Forester and the 2022 Escape is identical. Buyers will be covered for five years or 60,000 miles when it comes to the powertrain, and they will have three years or 36,000 miles of limited comprehensive coverage. J.D. Power has given the new Forester a predicted reliability score of 83 out of 100. They have not evaluated the 2022 Escape, and they did not evaluate the 2021 model either. The 2020 Escape, which launched the current generation, got a score of 77.

The ride and handling of the 2022 Forester can best be described as sturdy. It is not going to thrill drivers, but it is a competent vehicle for moving around in town. Thanks to its higher ride height and standard all-wheel drive, the Forester is a better off-roader than most of its competitors. This is especially true of the new Wilderness trim level.

Buyers will likely find the Escape to be a bit sportier, although there are far more athletic options available in the class. The front-wheel-drive models feel like they lack proper road grip in certain situations, but the ride and handling are fine overall. The suspension of the Escape does an admirable job of absorbing bumps in the road.

These are both two-row SUVs. Despite being classified as compact, both the Forester and the Escape provide a good deal of head and legroom in both rows. The Escape has sliding rear seats, a rare feature that makes it easier for everyone to get comfortable. As for the Forester, its door open nice and wide to make it easy to get into either row.

If technology features are the priority instead, the Forester wins once again. That is if buyers are comparing the base models. The Forester comes standard with a 6.5-inch touchscreen, Android Auto, Apple CarPlay, and satellite radio. Meanwhile, the base Escape model has a 4.2-inch central display and no smartphone integration compatibility. The Escape does come standard with a Wi-Fi hotspot, however.

Higher models of the Escape add a 12.3-inch digital gauge cluster. The SUV can also upgrade from its standard six-speaker stereo to a 10-speaker setup from Bang & Olufsen. The Forester comes standard with only four speakers, but it can upgrade to a nine-speaker premium setup from Harman Kardon. Wireless device charging is an available feature for the Escape.

The Forester is widely praised for its well-built interior that does an excellent job of isolating passengers from road and wind noise. It uses nice materials to create an upscale feeling. The Escape, on the other hand, utilizes far too many hard plastics and has a cheaper look and feel.

One of the biggest factors for some buyers are the crash test scores. The National Highway Traffic Safety Administration tested the 2022 models of both of these vehicles, and they both received five out of five stars overall. Furthermore, they received five stars in both frontal and side collisions. Both of these SUVs got four stars for rollover testing, which is common for this vehicle class.

Another organization that tests the safety of new vehicles is the Insurance Institue for Highway Safety. There are six main categories looked at, and both the 2022 Forester and the 2022 Escape received the top score in five of them. Both of these vehicles got the second-highest score when it came to side crash testing. Ultimately, it would be hard to choose between the Forester and Escape based on crash-test scores alone.

There are more standard driver assistance features found on the Escape in 2022. It has blind-spot monitoring, pedestrian detection, lane departure warning, driver drowsiness, and forward automatic emergency braking. The MyKey feature, which limits what secondary drivers can do with the Escape, is also standard for the new Escape.

Select models of the Escape add even more cutting-edge safety tech. Adaptive cruise control is available, and buyers can also get traffic sign recognition and a head-up display. The 2022 Escape can also be equipped with a parallel and perpendicular park assist.

Buyers can get the 2022 Forester for as little as $24,195. This is right around average for the class. When factoring in the standard all-wheel drive, which typically costs more, the base Forester is actually a good deal. As for the entry-level Escape, it starts out at about $25,555. The top Forester trim level starts at $35,295. This is quite similar to the top Escape, which starts out at $35,490.

Unfortunately, vehicles cost much more than what their price tag says. That is why buyers should also consider the true cost-to-own of a vehicle, which factors in things like fuel costs, maintenance, and depreciation. These numbers will naturally vary based on the trim level and option. This guide will focus on the entry-level models of each as a general idea.

These two compact SUVs are both well-made and they both offer respectable value. Either of them should serve most drivers well, although there are some factors that will help sway some drivers toward one or the other.

The 2022 Forester has roomy seats and excellent cargo capacity. It also comes standard with more technology features, plus it has all-wheel drive on its standard feature list. Despite that fact, the Forester also manages to have respectable fuel economy. As a bonus, it holds onto its value very well and has the nicer cabin.

As for the 2022 Escape, it has a longer list of standard driver assistance features. It is also quite efficient, and it is available as both a hybrid and a plug-in hybrid for those who are concerned with gas prices. Although the Escape lacks cutting-edge technology on its base model, it has a user-friendly setup on all other trim levels.

The 2022 Subaru Forester is a great choice for those who want the added traction of all-wheel drive, plus plenty of cargo space for their adventures. Those who are looking for a fuel-efficient way to get around town should take a closer look at the 2022 Ford Escape.