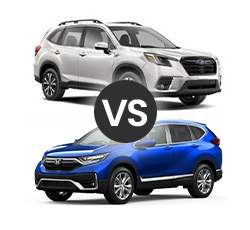 The Subaru Forester and Honda CR-V both have a great combination of features. They're fairly capable while being modern in terms of their safety and technology. They're pretty practical when it comes to price as well. These vehicles are similar in many ways, but they also differ in some key areas, which will be detailed below.

Subaru offers one type of powertrain with the Forester. In comparison, Honda offers a traditional system and a hybrid one with the CR-V.

The engine on the Forester has a displacement of 2.5 liters. It's a four-cylinder version that can make 182 horsepower and 176 pound-feet of torque. Subaru has paired it with a Lineartronic continually variable transmission. On select trims, there's a manual mode that drivers can choose to take advantage of, if they wish. There would either be seven or eight speeds with manual mode, depending on the exact trim.

The driving experience with this Subaru isn't particularly exciting, but since the Forester comes with standard all-wheel drive, it does seem pretty satisfactory. Most Forester trims have a maximum towing capacity of 1,500 pounds. The exception is the Forester Wilderness trim. It's a new offering from Subaru for the 2022 model year that can tow up to 3,000 pounds.

Honda's first option for the CR-V is a turbocharged 1.5-liter engine. Like the Forester's engine, it has four cylinders. Its turbocharger makes a significant difference in capability. Though this engine is smaller than the one in the Forester, it can make a little bit more power. It delivers 190 horsepower and 179 pound-feet of torque.

This engine works with a continuously variable transmission that has Sport mode. While all-wheel drive isn't standard, it is available. Towing capacity is 1,500 pounds, which is the same as what most trims of the Forester can do.

If potential buyers are interested in conserving fuel, then they can consider getting a hybrid version of the CR-V. It uses an electric motor and a 2.0-liter engine. These two components work together to make a net horsepower of 181 and 232 pound-feet of torque. One advantage to the hybrid versions is that they come standard with all-wheel drive.

Many trims of the Forester have X-MODE, which maximizes their grip and traction when the trail or road conditions are tough to deal with. The Forester Wilderness has a dual-function X-MODE program that has snow, dirt, deep snow, and mud settings. Further, the Wilderness has re-tuned gearing that gives it a better ability to climb steep hills and tow heavy loads. This is definitely the trim to select if anyone plans on going off the beaten path.

Either one of these vehicles would be pleasant to drive, though the Forester handles itself better in rugged terrain. The Forester has traction control and active torque vectoring to improve the driving experience, and it has hill descent control, which is a feature that can limit speed when traveling down steep slopes.

The Honda CR-V doesn't have hill descent control, but it does have hill start assist. When this program is engaged, pressure stays on the brakes when the driver switches from the brake to the gas pedal. As a result, the SUV doesn't roll backwards.

Active noise cancellation is found on the CR-V, too. It can reduce the amount of exterior and engine noise that comes through into the cabin.

The hybrid version of the CR-V has three different drive modes. ECON optimizes efficiency, Sport makes the SUV feel a little bit more aggressive, and EV is an electric mode that can be used only for limited periods of time.

When it's time to park, either one of these vehicles can be easily maneuvered into a spot. The Forester is less than an inch longer than the CR-V is, but the CR-V is a bit wider. Neither one feels cumbersome or particularly large.

With either model, the driver can have a somewhat high riding position. Many people prefer sitting taller when they're behind the wheel. These SUVs have a somewhat similar shape, with big windows in the back that make it a bit easier to see in various directions.

Interior size is something that's important to consider when looking into SUVs. The Subaru Forester has 39.4 inches of second-row leg room, whereas the CR-V has 40.4 inches of leg room in its second row. In either cabin, taller passengers should be comfortable in the back seat.

When the rear seats of these vehicles are upright, there's still plenty of space to transport items. The CR-V can either have a rear cargo volume of 39.2 or 33.2 cubic feet, depending on whether it's a non-hybrid or a hybrid. The entry-level trim of the Forester has 28.9 cubic feet of space behind its seats, and all the other trims have 26.9 cubic feet of volume back there.

Technology is another factor to consider when choosing a particular vehicle. Subaru and Honda have done pretty well with the Forester and CR-V, for the most part.

The Forester can either have a 6.5-inch or an eight-inch touchscreen. Either way, it would have Apple CarPlay, Android Auto, Bluetooth, and SiriusXM. Select trims have available navigation and available premium sound systems. The standard configuration is for the entry-level trim to have four speakers and all the rest to have six speakers. All trims except the first one in the lineup also have Wi-Fi capability.

Most trims of the Honda CR-V have Bluetooth, Apple CarPlay, and Android Auto as well. SiriusXM is found on the top three trims, but not on the other two. In fact, the first trim in the lineup doesn't even have Apple CarPlay or Android Auto, nor does it have a seven-inch touchscreen like all of the others do. Instead, it has a five-inch LCD screen. It does have Bluetooth, which can be convenient.

Honda has equipped the top-level CR-V trim with standard navigation, and this trim has wireless charging and a nine-speaker audio system. The others have six speakers, with the base trim having four.

With the Forester, the lineup starts off with dual front USB ports. The second trim has available dual rear USB charging ports, which is something that's standard in the other trims. Unfortunately, wireless charging is not available with the Subaru Forester.

The good news is that both of these SUVs have a generous amount of driver-assist technologies. They have the ability to keep an eye out for problems, warn drivers about them, and potentially help people take action to correct certain situations.

Forward collision warning comes along with collision mitigation braking, and these components assist CR-V drivers as they try to stay a safe distance away from those in front of them. On the Subaru, the corresponding systems are called pre-collision throttle management and pre-collision braking. Both vehicles have lane departure warning and adaptive cruise control, and they have the ability to correct steering in order to keep themselves center in the right position.

Blind spot monitoring and rear cross-traffic alert are found on the higher trims of the two vehicles. The Forester, but not the CR-V, can come with reverse automatic braking, and the Wilderness trim has a 180-degree front-view monitor. This monitor can help the driver see any obstacles in the path, so it's useful when going on trails. It can also be utilized when getting in and out of parking spots.

The entry level trim of the Forester is about $1,000 cheaper than that of the CR-V. It's more affordable while also having the better technology package and standard all-wheel drive.

On the other end of the spectrum, there are the CR-V Touring and EX-L and the Forester Limited and Wilderness. The Forester Limited costs about $32,500, with the Wilderness having a starting price of approximately $33,500. The CR-V EX-L is cheaper than both of those, with a cost of about $32,000, but the Touring is more expensive, coming in at $36,600.

The Forester Wilderness has some unique features that aren't going to be found on the CR-V. It has a front-view monitor, an extra-wide rear gate opening, an anti-glare hood finish, and reinforced roof rails. In contrast, the Limited feels refined with its leather seats and power rear gate. Like several of the mid-level Forester trims, the Wilderness and Limited have panoramic power sunroofs and heated front seats.

Honda's EX-L and Touring trim also have power moonroofs, but theirs aren't panoramic. They have power tailgates, wit the Touring having a tailgate with hands-free access. They both come with leather seats and heated front seats, too, and remember that the Touring has navigation and wireless charging. It even has a heated steering wheel, which is only an option on the Forester Limited. With all of these factors, the CR-V Touring feels like the most sophisticated option.

It's hard to say whether one of the SUVS is inherently better than the other. They both are fairly capable and can have similar types of technology integrated into them.

The Honda CR-V is slightly more expensive, but it does have a few nicer features. Importantly, it's available as a hybrid, which is really going to help it attract attention from a lot of potential buyers. Plus, the CR-V has a slightly larger rear seat.

In contrast, the Subaru Forester is the more budget-friendly choice. It has a more sporty, athletic feel to it, especially if the Wilderness trim is selected. Since it has standard all-wheel drive, the Forester seems like it would be very comfortable in rough conditions. Its most basic trim has a more advanced infotainment system than what's found in the CR-V's entry-level model, and it has more available USB ports. This may influence certain buyers.