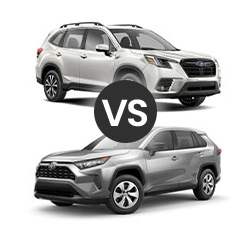 Staying on the beaten path can be kind of overrated. Off-roading is where it's at for those of us who love a rustic outdoor adventure. But perhaps your current ride isn't cutting it off the paved pathway, which has prompted you to research capable off-roading SUVs. On that list, you might want to write in the 2022 Subaru Forester and the 2022 Toyota RAV4.

Both of these SUVs are built to be taken off of the regular roadways, but they can handle paved surfaces too. The Forester offers its buyers standard all-wheel drive (AWD), and it has a plethora of cargo space available for all your favorite camping and hiking gear. A slew of driver aids comes standard, and with its better-than-average amount of ground clearance, you get an entirely capable off-roader. But the Forester has an underpowered engine that can feel sluggish and a max towing capacity that falls below average for this segment.

Then there is the RAV4. Aside from the regular gas-powered RAV4, there is a hybrid model available for those looking to save some money on fuel. But, for the purpose of this review, we will focus more exclusively on the gas-powered RAV4. This vehicle has a tranquil interior coupled with a cozy ride quality. Passenger and cargo space are both plentiful, and the controls are easy to use. For optimal off-roading, the TRD trim is the one to get. However, the steering feels quite vague, and the engine makes acceleration feel too sluggish for the liking.

So, which SUV is going to be the off-roader for you? Let's pit them against each other to find out.

A powertrain can make or break your ownership experience and can determine how effective a SUV is on and off the beaten path. The 2022 Subaru Forester receives its power from a base 2.5-liter four-cylinder engine that puts forth 182 horsepower and 176 lb-ft of torque. It gets paired to a continuously variable automatic transmission (otherwise referred to as a CVT), and, as is the case with all Subaru vehicles, all-wheel drive (AWD) is part of the standard design - an essential for off-roading.

Unfortunately, this engine is rather lackluster in terms of power. It takes this engine a slow 9.3 seconds to get from 0 to 60 miles per hour, making it hard to merge and pass on the highway. Steering and handling feel much more decent than that, and the brakes are strong enough to appease the average driver. With 8.7 inches of ground clearance and standard AWD, the Forester is a capable off-roader, which is where this SUV truly shines. The Wilderness trim level has front skid plates and additional ground clearance, making it even more off-road oriented than the other trim levels.

The Forester's fuel economy is respectable enough. It is EPA rated for a combined 29 miles per gallon, which places it near to the top of the class. In real-world testing, though, you have to press for throttle a lot due to the engine being so weak, and that can take the fuel efficiency down a few pegs.

As for the 2022 Toyota RAV4, it is powered by a standard four-cylinder engine that is able to produce 203 hp. It is paired up with an eight-speed automatic transmission. Front-wheel drive is the standard drivetrain for most trim levels, but AWD is an option. The TRD Off-Road and Adventure trim levels give you an enhanced AWD system that delivers more traction for driving on slippery road surfaces.

This engine can feel somewhat slow, taking 9.1 seconds to get from 0 to 60 mph. Steering also feels quite vague, so you might not know how much input you need to give it. However, the upgraded AWD system is worth getting if you plan on doing a lot of off-roading since it gives you a remarkable amount of traction.

The RAV4 has an EPA estimated 28-30 mpg in combined driving, all depending on the configuration you own. You can load up an AWD-equipped Adventure trim with a couple of people and some cargo and still get about 28-29 mpg in combined city and highway driving. For a vehicle in this segment, that is a respectable showing indeed.

Drivability is an umbrella term that we use to talk about the factors that make ownership of a particular vehicle either a pleasure or a pain. How comfortable is it? How well crafted is its interior? Is the tech functional? Is there ample storage available and abundant utility? Those are all things to consider when buying a new vehicle.

The 2022 Subaru Forester has front seats that are padded for the utmost in comfort, packed with plenty of lumbar support and secure bolstering on the sides to keep you locked in place while rounding through turns. The suspension smooths out bumps of all sizes, and road noise hardly makes its way into the cabin. However, the tall profile of this vehicle means that some wind noise will be audible at higher rates of speed. The climate control buttons are all placed well within your reach, and the optional automatic climate control system is thorough at heating or cooling the cabin. The heated front seats feel nice and comforting on cold days.

The Forester's controls are clearly labeled and placed within reach along the dash. The 8-inch touchscreen display gives you crystal clear graphics that are easy to see from the driver's seat. You can squeeze a third adult in the back seat with how much space is available, and there is enough room for all heads and legs. The driver's seat has plenty of adjustments so that you can quickly find a good driving position regardless of your body shape and size.

Even if you don't consider yourself to be a tech-savvy person, you should find that the infotainment system is easy to use. The dual-screen set-up is user-friendly and gives you some crisp graphics. Voice controls work well at understanding natural speech patterns, plus the navigation system is straightforward with its directions, although smartphone app integration via Apple CarPlay and Android Auto is the most simple method for getting directions. There are plenty of USB ports in the front and rear of the vehicle for everyone to plug into.

Storage is not quite as expansive as some of the Forester's competitors, such as the Honda CR-V. But, with a high roof and smart design, you do get a bit of versatility for how you load your cargo. Unfortunately, the LATCH system for child safety seats could be better designed since the anchors are buried deep between the seat cushions.

The 2022 Toyota RAV4 has a lot to offer in terms of drivability too. In terms of comfort, the suspension finds a nice balance between being smooth and keeping the vehicle under control. The seats are sculpted for support and offer enough adjustability for the driver, but the front seat passenger might find themselves wanting a little more adjustability from their seat. The RAV4 remains quiet, even at highway speeds. You will hear a little bit of engine growl when you press into full throttle, but that is about it. The climate control system does a good job of distributing air flow evenly throughout the cabin, and the rear vents feel nice for those in the back.

Getting in and out of the RAV4 is easy, even for little kids or people with mobility issues. The only qualm we have is that the front passenger seat is too high and cannot be adjusted downward a little bit further. Outward visibility is clear all around thanks to the slender roof pillars and wide glass panes. The controls are labeled properly and are therefore easy to use. They're also well within reach. The rubbery climate control knobs are large and well within your reach. The touchscreen display is really the only thing that is situated too far away from the driver.

That being said, the touchscreen infotainment system is easy to use thanks to the inclusion of some physical controls. Unfortunately, some of the graphics look dated on this relatively new system. The Entune software is just too clunky for the liking, but smartphone app integration via Apple CarPlay and Android Auto is standard issue.

With 37.5 cubic feet of cargo space located behind the rear seats, you get some best-in-class space in the RAV4. You can fold the seats down and max it out to 69.8 cubes. You can tow up to 3,500 pounds when properly equipped, which is slightly better than average for a small SUV like this. Unlike the Forester, the LATCH system in this vehicle has anchors that are easy to access. You also won't be struggling to get bulky rear-facing car seats into and out of the vehicle since there is a lot of space in the back and wide door openings.

Subaru and Toyota both equip their vehicles with a standard array of driver aids that get bundled into suites. On the Subaru Forester, as part of the EyeSight bundle, you get adaptive cruise control, lane keep assist, lane departure warning, and forward collision mitigation. On the Sport trim level, you get the additional benefit of evasive steering assist and blind spot monitoring with rear cross-traffic alert. The line-topping Touring trim level tacks on the standard driver monitoring system, which will emit an alert if the system's integrated sensors detect that you are becoming tired or distracted.

Similarly, the 2022 Toyota RAV4 is equipped with the Toyota Safety Sense 2.0 bundle of driver aids that is standard on every trim level. This bundle includes a traffic sign reader, automatic high beams, a lane keep system, forward collision warning, and adaptive cruise control. The XLE (the second trim level up) adds a blind spot monitor, and a surround-view camera system remains optional for all trims.

Value is something you need to think about before you invest your hard-earned money on a vehicle. Overall, the 2002 Subaru Forester gives the buyer a bunch of options for how you want to equip your vehicle. The build quality is superb, especially with the interior being put together so concisely. The warranty coverage is average for this segment, but you will still feel like you are getting your money's worth from this capable off-roader.

That being said, the 2022 Toyota RAV4 packs quite a lot of value in. Inside and out, this vehicle is well constructed. The rubberized grip surfaces are a major bonus since they give you a more secure grip on things like controls and door knobs - right where you need them. The optional simulated leather upholstery looks downright luxurious and is breathable, making you think it is real leather. While warranty coverage is average for this segment, you do get two years/25,000 miles of free scheduled maintenance, which is extremely generous compared to the one year of scheduled maintenance that some manufacturers offer (while others offer none at all).

Both the 2022 Subaru Forester and 2022 Toyota RAV4 are well-built for off-roading but can function well enough on the beaten path. When you put them toe-to-toe though, the RAV4 comes out on top thanks to some of its clever design elements and more capable powertrain. The optional raised suspension is nice, and the Adventure and TRD Off-Road trim levels are suited for trails. All in all, we would pick the RAV4 over the Forester based on the fact that there are more options for off-roading features, although we do commend Subaru for continuing their trend of offering standard AWD, which we suspect will be a selling point for them for years to come. But having the option of FWD or AWD is nice, which is why the RAV4 comes out on top here - but just by a hair. Both vehicles are respectable options.