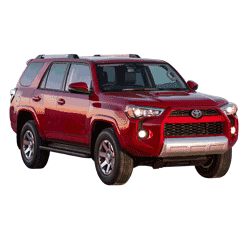 If you are in the market for an all terrain sports utility vehicle (SUV), then you cannot go wrong with the 2014 Toyota 4Runner. It comes with all the bells and whistles you would expect from an SUV. It features a superior V6 engine and comes with excellent cargo space. The 2014 Toyota 4Runner is a fun vehicle, offering tons of features and a great driving experience. The 2014 Toyota 4Runner is available in 3 models – SR5, Trail and Limited. A premium and base versions are available for SR5 and Trail models. The 4Runner competes with other SUVs such as Jeep Grand Cherokee, Dodge Durango and Volkswagen Touareg.

2. Entune Audio System
The Entune Audio system is available as a standard feature for the 2014 Toyota 4Runner Limited edition. The Entune system is offered in 3 versions – Audio Plus, Premium Audio with Navigation, and Premium JBL Audio with App Suite and Navigation. The Entune system is packed with a wide range of options for entertainment and connectivity. It comes with a high-resolution touch screen, AM/FM Radio, CD Player with MP3, JPL speakers, USB port, voice recognition, Bluetooth connectivity, phone book access, traffic and weather apps and SiriusXM Radio. The Entune App Suite comes with apps such as Bing, Facebook, Pandora, Yelp and more.

3. Interior Design
The interiors of 2014 Toyota 4Runner rival the interiors from other mid-size SUVs. The 4Runner comes with a dual zone automatic climate control system. A multi function display shows outside temperature, clock and average fuel economy. The 2014 Toyota 4Runner includes an 8-way power adjustable driver seat and a 4-way adjustable front passenger seat. The driver seat provides lumbar support as well. Leather seats are standard for the 4Runner Limited edition. The steering wheel is fitted with audio and Bluetooth hands free controls. Cruise control is a standard feature on all models.

6. Mileage
SUVs are not known for their mileage. The average mileage for combined city and highway traffic is 22 mpg, 21 mpg and 22 mpg for SR5, Trail and Limited respectively. The mileage is more or less comparable with similar SUVs on the road today. It is no surprise that a much bigger body contributes to the reduced mileage for the 2014 Toyota 4Runner models. Most drivers do not consider fuel efficiency as a major concern while looking for a mid size SUV such as the 2014 Toyota 4Runner.

7. Room for Passengers
The 2014 Toyota 4Runner offers ample space for 5 to 7 passengers. The second row seats are designed with a recliner for passenger convenience. The SR5 and Limited editions offer a third row seat for children and small kids. All 3 models offer a smooth and quiet passenger experience even on difficult terrains.

8. Cargo Capacity
Most owners expect SUVs to provide significant cargo space. The 2014 Toyota 4Runner does not disappoint the customers in this area. The 2014 Toyota 4Runner offers up to 88 cubic feet of cargo space behind the rear seats. The vehicle is capable of towing an amazing 4,700 pounds of cargo. An integrated towing hitch and wiring harness with 7-pin connectors are also available.

9. Price
The 2014 Toyota 4Runner starts at $32,820.00. The higher end Limited edition is priced at $43,400.00. The price range reflects the various models and options offered by Toyota. The prices are certainly comparable with that of competing brands in the mid-size SUV segment.

Conclusion
The 2014 Toyota 4Runner is a leader in the mid-size SUV segment. The vehicle is filled with high tech comforts and entertainment features. This vehicle certainly meets the customer expectations about a decent SUV from Toyota, the accomplished industry leader.

• 2018 Toyota 4Runner trim levels. What you get with each trim configuration.