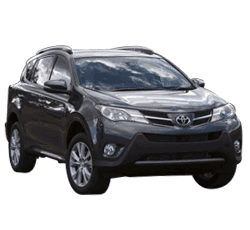 The Toyota RAV4 was the original compact SUV. While it now has company in the form of competitors like the Honda CR-V and the Ford Escape, it still provides many benefits for buyers who prize both space and fuel economy. The RAV4 has evolved considerably since the original model, to the point where it has now become a workable alternative to the midsize sedan for family transportation. [ For the 2015 model see - Toyota RAV4 Pros and Cons ]

What's New for 2014
The RAV4's design was updated in 2013; it lost its third row and the optional V6, which were elements that made it popular with some market segments. The 2014 model year brings with it a new optional technology package and a few minor adjustments to the available audio systems. The side hinged rear door has been switched out in favor of one with a roof hinge and it has lost the spare wheel on the rear of the vehicle, one of the features it has had since its inception.

1. Space
Passenger and cargo room is arguably the main reason that people opt for vehicles in this class and the RAV4 provides a lot of it, far more than competitors like the Ford Escape do. The front and rear seats are perfectly sized for adults and the cargo bay is large for the class at 73.3 cubic feet with the rear seats down, 38.4 with them up.

2. Interior Quality
The plastics used in the RAV4's interior are of a higher quality and there are plenty of soft-touch surfaces to make it a comfortable space. The Limited trim RAV4 gets the premium faux-leather product, Softex.

3. Features
The RAV4's basic trim is the LE and this comes with a variety of offerings that include keyless entry, Bluetooth and a rearview camera. The midlevel XLE trim includes heated side mirrors, dual zone climate control, and a sunroof. The top-level Limited trim comes with all of the features of the LE and XLE along with several others including a power adjustable driver's seat with memory.

4. Engine
The RAV4's 2.5-liter engine has four cylinders and puts out 176 HP. This is enough power to suit most drivers' needs. The engine comes with a six-speed automatic transmission. The RAV4 can easily tow up to 1,500 pounds. RAV4 buyers have two options: FWD and AWD.

6. Safety
Along with its rearview camera, the RAV4 comes equipped with antilock disc brakes and front head restraints for reducing whiplash. Additionally, drivers get front seat side and side curtain airbags. The Insurance Institute for Highway safety gave the RAV4 a "good" rating for its performance in crash tests.

7. Ride Quality
For most city or highway driving, the RAV4 is reasonably powerful; it also provides a smooth ride and the cabin is quiet. The Sport mode helps to make up for power deficiencies when passing.

8. Off Road Ability
The AWD RAV4 will not disappoint drivers who want to venture onto rougher terrain as it is capable of generating enough power to deal effectively with off road and bad weather situations.

9. Sport/Eco Modes
The RAV4 is equipped with a Sport mode that speeds up the throttle response and makes the steering firmer. The Eco mode helps to improve fuel economy.

10. Customer Satisfaction Rating
The Predicted Reliability Study conducted by JD Power and Associates gave the 2014 Toyota RAV4 a reliability score of four out of five. The RAV4 was determined to be "better than most."

12. Exterior
The front of the RAV4 is distinctive and features large fog lights and chrome accents on the upper grille. Overall, the vehicle has a muscular look that emphasizes practicality over sleekness.


Potential Drawbacks of the 2014 Toyota RAV4 - The Cons

1. No V6 Option
This means that while the four-cylinder is adequate, the RAV4 may not impress drivers looking for more power.

2. Rough Ride in the Limited
The suspension does absorb much of the harshness from uneven road surfaces, but this is not always the case in the Limited trim. This is largely due to the Limited's 18-inch wheels which transfer more feedback from potholes and bumps into the cabin.

3. Eco Mode
This mode is intended to enhance the RAV4's fuel economy, but its drawback is that it hinders the vehicle's ability to accelerate.

The 2014 Toyota RAV4 will meet most or all of the requirements for buyers shopping in the compact SUV category. The RAV4 is a solid option for families that need a lot of room and that like the combination of a smooth ride and decent fuel economy.

• 2018 Toyota Rav4 trim levels. What you get with each trim configuration.