2014 Toyota Sienna Pros vs Cons. Should You Buy? 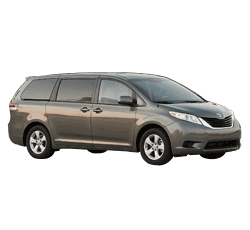 If you're in the market for a new vehicle to transport a large family or just a lot of stuff, odds are you're considering a minivan. The 2014 Toyota Sienna is one of the highest rated minivans on the market this year, but it's important to consider if it has the right features, price, and safety record for you and your family before you set foot in a dealership. [ For the 2015 model see - Toyota Sienna Pros and Cons ]

1. Gas mileage. While you'll never see the high mileage ratings of a compact car in this class of vehicle, the Sienna can get up to 23 mpg on the highway, making it one of the most fuel efficient minivans on the market today.

2. Seating. If you need a vehicle that can seat eight people, the Sienna is pretty much your only option. This is the only minivan that offers an optional eighth seat on the second row that can be removed as desired.

3. All wheel drive. The Sienna is the only minivan we know of that has this feature. If you live anywhere with snow, or if you find yourself parking your minivan in a lot of muddy parking lots, you'll appreciate this feature.

4. Tow prep package. This is standard on all models of the Sienna in 2014. If you find yourself needing to transport a lot of gear for all the people in your vehicle, you'll appreciate this feature.

5. Heated outside mirrors. Drivers in colder climates will appreciate this feature that prevents outside mirrors from fogging or icing over. If also means that you won't spend a lot of time deicing your mirrors if you leave the vehicle outside overnight.

6. Rear view camera. While these will become required on all minivans and SUVs next year, Toyota has gone ahead and added it to their 2014 minivans. This is an important safety feature that is great for families with kids.

7. Rear entertainment system. There are several different versions of this system that are available in the different versions of this vehicle. In general, however, this system is unique because of the split screens offered in the third row of seating. That means not having to listen to fights over what movie to watch on a long road trip. Furthermore, the higher-end systems come equipped with USB connections that allow passengers to integrate everything from a tablet to laptop into the entertainment system.

8. V6 engine. The Sienna has included this engine for several model years, and it has enough juice to provide the vehicle with enough power to accelerate. As an added bonus, many professional reviewers rate the Sienna very high in handling and performance tests.

9. Space. The second row seats on the Sienna are mounted on long tracks that allow them to move far enough forward to comfortably seat three adults in the third row or move far enough back that three adults and gear can comfortably go in the second row. There are four places to mount a car seat in the vehicle. The real advantage to the Sienna, however, is in the storage space. Concealed storage areas are in the dashboard, in the front center console, and in several places throughout the back of the vehicle.

10. Safety. With front and side airbags, anti-lock brakes, rear view cameras, and a host of other safety features, the Sienna is rated among the top in its class for safety. It's been highly rated in crash tests.

11. Maintenance record. While it's impossible to know what repairs will be needed on the 2014 Sienna until the issues come up, previous model years of this vehicle have some of the best maintenance records in this class of car. In addition, Toyota has a great reputation for high-quality vehicles that require very few repairs and last for years.

1. Audio system is hard to set up. This is the biggest complaint about the Sienna from many professional reviewers and new drivers. The Entune system is designed to integrate with several smart phone apps and manage everything from the satellite radio to the navigation system. Expect to spend an hour or more, though, getting everything set up on it. Entering in phone numbers and programming favorite destinations requires the manual to figure out. Fortunately, once everything is entered, you won't have to do it again until you buy a new vehicle.

2. Size. The Sienna is one of the longest minivans on the market and also one of the widest. While this is great for passengers in the vehicle, it does make it difficult to park in tight spaces. You might also want to make sure you have enough room for it in your garage before you bring it home.

3. Price. The sticker price for the Sienna is among the highest in its class. It should be noted, however, that the cars have a great reputation for maintenance and their resale value is among the highest in their class as well. Most people who buy one of these cars intend to keep it for at least five years, allowing them to take advantage of the maintenance savings. If you frequently swap out your vehicles, however, you may want to consider a cheaper minivan or SUV.

4. It's still a minivan. While the handling and performance are great for it's class, don't expect this car to perform like an SUV, truck, or sports car.

If the time has come to get a minivan, the Toyota Sienna is definitely worth taking a look at. While it is priced higher than other minivans, families that plan on owning the vehicle for several years will see some savings in reduced trips to the dealership for repairs, and the features in this car can make long road trips pleasant, even with a van full of kids.