2014 Toyota Highlander Pros vs Cons. Should You Buy? 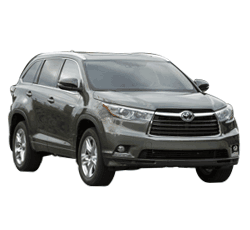 10 Reasons Why You May want to
Buy a 2014 Toyota Highlander:

The Toyota Highlander has always been a pleasant family transport. The 2014 model continues that tradition. If you want reliability, this is the ride you’re looking for. And if you want adventure but don’t mind a vehicle that looks like it could have a baby seat and toys in the back, you’ve still come to the right place. The 2014 Highlander will get you up the mountain to the grocery store.

In fact, here are a bunch of reasons why the latest Highlander is a standout in midsized SUVs and, to be fair, a few reasons why a driver might look elsewhere.
[ For the 2015 model see - Toyota Highlander Pros and Cons ]

Appealing, practical and enhanced, the 2014 Highlander is manageable, affordable and an impressive standout among midsized SUVs.

• 2018 Toyota Highlander trim levels. What you get with each trim configuration.