2014 Toyota Prius Pros vs Cons. Should You Buy? 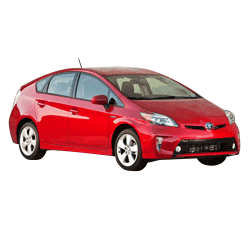 Until recently, the Toyota Prius was the only compact or mid-size vehicle that got much attention. It was one of the first hybrid models and faced very little competition. Today, things have changed considerably. Similar models by Chevrolet, Ford, and Honda have allowed consumers to do a more complete comparison before deciding on their purchase. All in all, however, the 2014 Toyota Prius still comes out on top when all the buying considerations are carefully looked at. [ For the 2015 model see - Toyota Prius Sedan Pros and Cons ]

Very little has changed from last year's model. The hatchback version looks the same as before, and the wagon trim has also kept its exterior appearance. The Special Edition Persona series is no longer available. The engine and transmission is the same, as is the battery pack charge longevity and combined fuel efficiency.

1) Superior Fuel Efficiency. The whole idea of hybrid vehicles is to substantially increase fuel efficiency through the use of an electric motor/combustion engine combo. Prius comes out on top when it comes to overall fuel savings. The average of 51 mpg on the highway beats out most hybrid competitors. Because the electric motor is used primarily on surface streets in urban and suburban areas, the city driving average of 48 mpg is very, very impressive.

2) Spacious Seating Area. One of the reasons the Toyota Prius is so popular as a family car - and as a taxicab fleet in many cities - is the oversized rear seating area. Both the hatchback and wagon have plenty of legroom and can accommodate three adults rather comfortably in the back seats. While there is no denying that the car can be a bit difficult to climb into, the cabin itself is rather pleasant even though some of the construction materials are sub par.

3) Plenty Of Cargo Space. Both the hatchback and wagon trims have enough rear storage space to accommodate a family's belongings during longer road trips. In fact, the hatchback offers more cargo volume than most midsize sedans currently available for sale in the United States.

4) Comfortable Ride. Although the engine and electric motors are a bit noisy, the ride itself is very comfortable. Handling is average, as is the turning radius. However, the car itself is easy to steer, and the suspension system is actually somewhat above average. Small bumps are hardly felt by passengers. The 2014 Toyota Prius is also very easy to park.

5) Plenty Of Trim Choices. There are a total of five trims available on the 2014 Toyota Prius. They are designated as Prius Two, Prius Three, Prius Four, and Prius Five, with the larger wagon version known as Prius V. As soon as consumers become familiar with this confusion between the uplevel Five and the wagon trim V, sorting out the differences in standard and optional equipment becomes rather simple.

7) Good Choice Of Optional Features. The uplevel trims can be purchased with a special Solar Roof package that includes a power sunroof and the exciting new solar-powered ventilation system. This reduces stress on the air conditioning system and saves battery power. The Prius Four options package includes a head-up display as well as Toyota's Safety Connect® communications system. The Prius Five can be purchased with the Advanced Technology package. This special version includes adaptive cruise control, Pre-Collision alert, and a better quality navigation system.

8) Excellent Safety Features. Most of these are in the technical category, and some of them have been described above. The advanced safety features on the special package options include lane departure warning, Pre-Collision alert, emergency response, and roadside assistance. The government crash tests resulted in an overall 4-star rating for the 2014 Toyota Prius.

9) Long-Term Savings. Those who plan on keeping their Prius for a number of years will probably see a positive return on their investment. The higher initial cost of the vehicle is offset by the excellent gas mileage.

10) A Long-Lasting Vehicle. Although some of the materials used for the interior are not top-quality, the overall construction of the vehicle is above average. This car maintains its value well for up to 10 years.

1) High Initial Investment. Competing gasoline models that offer more luxury and greater number of standard features cost less than the 2014 Toyota Prius. Hybrids cost more, plain and simple. It may take seven years and 75,000 miles before breaking even on the higher initial cost versus fuel consumption.

2) Poor Acceleration. A few other hybrids on the market are more peppy than the Toyota Prius. Acceleration for this model is rather slow and uneven, with the car going from zero to 60 mph in about 10.1 seconds. The primary engine is a 1.8L, 4-cylinder model that churns out 134 horsepower when combined with the electric motor/generators.

3) Noisy Ride. The engine combination on this hybrid is rather loud, even at slower speeds. Passengers can become annoyed with the humming sounds and high-frequency whines.

Conclusion
For the most part, Toyota has done a good job with the Prius evolution. Because there is more competition in the hybrid sedan and wagon segments, changes to entice buyers have had to be made. The fancy high-tech gadgetry on the 2014 Toyota Prius is one of its latest and most successful selling points. Its outstanding fuel economy cannot be understated. Consumers are advised to check out the standard features on competing gasoline models, however. The high initial cost of the Prius models may or may not be offset during the period of ownership.

• 2018 Toyota Prius trim levels. What you get with each trim configuration.