2014 Toyota Tacoma Pros vs Cons. Should You Buy? 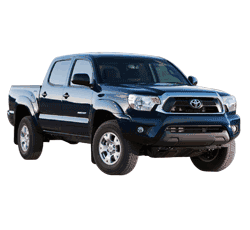 The six cylinder is standard on four wheel drive Double Cab Tacomas while the rest come with the four cylinder engine. Regular and Access Cab Tacomas have a standard five speed manual transmission. The other difference between the cab styles is that a Double Cab can be purchased with a short 5 foot bed or it can be purchased with the same standard 6 foot bed that is found in the Regular Cabs and Access Cabs.

The Tacoma's main competitors are the Ford F-150, the Honda Ridgeline and the Nissan Frontier. The F-150 is just as solid as the Tacoma but its ride is a bit more sluggish. While the Ridgeline doesn't have a traditional style truck body frame, it does have a solid V6 engine with 3.5 liters along with a handy lockable trunk and a tailgate with two hinges. The Frontier is a viable midsize truck and it is very similar to the Tacoma except for its lack of a regular cab. The Frontier handles very precisely and its seats are a bit more comfortable than the Tacoma's.

1) The Tacoma is very cost efficient for what it provides. The starting MSRP of a bare bones Tacoma is only $18,800. It's difficult to find a midsize truck at such a low price. Higher end, fully loaded Tacomas sell in the high $20,000s but don't break the $30,000 level.

2) Although most auto aficionados consider the Tacoma to be a midsize truck, it borders on being compact. This is perfect for truck owners who want drive through urban areas without any hassles.

3) Simply put, the Tacoma is a fun truck. It handles nicely, has precise steering and excellent acceleration capabilities.

4) The Entune audio system is standard on all Tacoma cab styles. Entune is easy to use and provides a plethora of entertainment options that are easy to navigate.

7) Aside from the wide array of amenities, the Tacoma's interior is also spacious and orderly. It's easy to move around once inside and the front seats are very comfortable.

8) The Tacoma's audio and climate controls are easy to use for drivers of all ages.

9) Aside from the standard options referenced above, drivers can choose to add a plethora of features like a navigation system, keyless entry, 7 speaker audio, a backup camera, HD/Satellite radio and much more.

1) While the Tacoma received the best possible rating of “Good” during the Insurance Institute for Highway Safety's side and moderate overlap crash tests, it also received the next to worst rating of “Marginal” for its roof strength.

2) Critics are quick to point out the Tacoma's lack of space in Access Cab rear seats.

3) The Tacoma's engine is fairly loud and the ride isn't always completely smooth. The vehicle doesn't take to bumpy surfaces as well as some drivers would like.

The Tacoma now includes the Entune stereo system for all cab types. The SR sport style package is available at an extra cost. The optional rearview camera can now be seen on the touchscreen display instead of a smaller screen that was used in previous years. Aesthetically, the Tacoma's front grille is more prominently featured and its headlights are less rounded. In terms of its exterior looks, the Tacoma resembles most other pickup trucks. This vehicle is about service and function, not beauty. Aside from making Entune standard, the Tacoma's interior now also has better grade plastics.

This year's Tacoma is well worth the low price tag. It is exactly what a truck is supposed to be: rugged, reliable and highly functional. It'll transport large amounts of cargo, take on heavy tows and maneuver through cities with excellent agility. Without a doubt, the Tacoma stands at the head of the midsize truck class.

• 2018 Toyota Tacoma trim levels. What you get with each trim configuration.