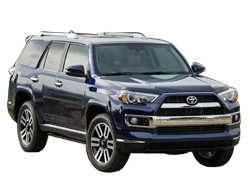 Should You Buy a 2015 Toyota 4Runner? Here Are Some Reasons For and Against

Considered a rare breed of vehicle because of its body-on-truck design, the 2015 Toyota 4Runner stays true to its predecessors. A minor facelift and the addition of new in-cabin features distinguish it from the prior year without losing the image of strength and off-road capability.

A 4-liter, 5-speed, and 270 horsepower engine breathes life into its aggressive frame with trims and packages ranging from the SR5 to the all-new TRD Pro. Thanks to the introduction of the TRD Pro, former enthusiasts of the now out-of-production Toyota FJ can remain loyal to the brand without missing out on their favorite terrain. While the TRD Pro may be for the more ambitious, the 2015 Toyota 4Runner in any of its trims and packages continues to be unique for its combination of ruggedness and refinement.

1. It’s off-road performance is as good as they say it is

With a barrage of competitors using intimidating names like the Dodge Durango and the Ford Explorer, the 4Runner may strike prospective buyers as a meeker option, until you consider this crossbreeds’ origin. Once a mere truck with a flimsy extension covering what used to be its bed, the Toyota 4Runner has evolved gradually since its inception in 1984 without losing to this day the bones of a pickup. The 2015 Toyota 4Runner utilizes a reinforced body-on-frame construction. The road less travelled truly is this SUV’s natural habitat.

2. The legendary reliability and safety of Toyota

The 2915 Toyota 4Runner stays in lockstep with the quality of Toyota’s other lines. While other names, like the Jeep Grand Cherokee, arguably give more luxury without compromising off-road capability, more experts than not agree that the reliability of Toyota is peerless. Also included are active front headrests that move slightly up and forward to help reduce neck injuries.

This is another feature peculiar to the 2015 Toyota 4Runner that is particularly useful for those who are active and tend to throw dirty clothes or sneakers in the back with no regard to the unpleasant smell. The window in the back pops off and immediately clears the air of odor. Or, in the case of long items that cannot fit within the cabin, it provides that much needed extra space.

4. It houses some serious high-end technology

The the 4Runners instrument panel includes a 6.1 in. high-resolution touch screen display and comes standard on all models.

For select trims and packages, SofTex or perforated leather come optional, transforming this animal of the wild into a tame suburbanite.

6. Locking rear differential for the extremist

In case a wheel loses contact with the ground, the 2015 Toyota 4Runner evenly distributes engine power to both rear wheels on select trims.

Some reviewers disparage the third row in it as being too confined and mostly only functional for children, but it is useful and provides a large family with the capacity to comfortably trek a suburban landscape in style.

8. The introduction of the TRD Pro captures a niche market

The TRD Pro with its sophisticated suspension, tailored wheels and rims, and new exhaust is not for everyone. In fact, it will be in the wheelhouse of only a select few but that does not rob it of its glory. Possibly a larger slice of society would indulge in such a vehicle if they had the disposable income and time, but enough speculation. For the die-hard enthusiast looking for a thrill, there is no need to look further.

Capable of towing 4700 pounds, the 2015 4Runner is no featherweight, adding practicality to those fishing trips in the Great Outdoors.

It is far from cheap, priced $33-42,000 (MSRP), and yet with that said it ages gracefully, keeping its value better than comparable competitors like the Nissan Xterra and Jeep Wrangler.

With a MPG of 17/21, it is little better than a tank, but a tank is what you wanted in the first place to rumble over that tree stump, remember?

The 2015 4Runner is far from luxury, but even with that in mind, most reviewers were dismayed by a harsh cabin ride while cruising at higher speeds on pavement. For a vehicle that is marketed to appease both go-getters and family nests, this may be a deal-breaker for many moms looking to cruise in comfort.

For such an inhibitive price, 4Runners do not offer many comforts in lower trims, leading many observers of the inside materials to note their “cheapness.” It appears Toyota envisions the demographic that is able to pony-up $32,000 to also be able to go the extra mile and pay a few more thousand dollars on the finer accompaniments.

A common criticism is its less-than-agile steering, which is not terribly unusual for a SUV of this size, but still poorer than its peers.

5. The Entune media system is difficult to operate

Despite being touted by Toyota as a compliment to the cabin of the Toyota 4Runner, critics agree that Entune’s functionality is dubious and not as streamlined as the media packages in use by competitors.

Few vehicles still offer the novelty features on display in the 2015 Toyota 4Runner. Grace and poise are not its strengths, strength is. While certainly versatile and refined to a degree, it is a stretch to consider this the car of choice for large families,
2018 Toyota 4Runner Trim Level Configurations: