2015 Toyota Avalon Pros vs Cons. Should You Buy? 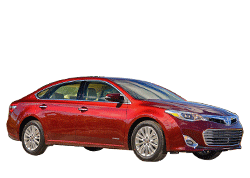 Should You Buy a 2015 Toyota Avalon? Here Are Some Reasons For and Against

Toyota's new 2015 Avalon offers drivers a smooth and comfortable driving experience, similar to that of earlier Avalon models. The full-sized luxury sedan comes equipped with a highly responsive powertrain and an excellent fuel economy, particularly on the hybrid 2015 Toyota Avalon.

There are dozens of reasons to choose the 2015 Toyota Avalon over other vehicles on the market. Read on to learn more about the pros and cons of the new Toyota Avalon, including how the car stacks up against the Ford Taurus, Kia Cadenza, and other popular full-sized vehicles.

The 2015 Avalon maintains many of the same features as it has since its 2013 redesign. The vehicle's interior and exterior are unique to the Avalon alone. The car is equipped with a high-tech, touch-based entertainment system in its plush and spacious cabin. The vehicle's exterior remains elegantly hatchback-esque. The vehicle carries over the best features of the 2014 Avalon while improving upon the vehicle's overall feel.

Top Ten Reasons to Buy a 2015 Toyota Avalon - The Pros

Both the Avalon Hybrid and the traditional gas-only Avalon offer jaw-droppingly efficient fuel economy. Though the V-6 Avalon averages 1-4 MPG better than competitors' luxury sedans, the hybrid Avalon is truly the most fuel-efficient vehicle in the Avalon line. Costing only $2,000 more than the gas-only version of the Avalon, the 2015 Toyota Avalon Hybrid offers drivers a whopping 39-40 MPG, making it one of the most fuel-efficient sedans on the market.

Unlike many comparable sedans, the 2015 Toyota Avalon is truly comfortable in the backseat as well as the front. The car offers ample space for backseat passengers, whether they're children or adults. Even passengers over 6 feet tall can sit comfortably in the rear of the Avalon. For drivers planning to travel with two or more additional passengers, the 2015 Toyota Avalon is an excellent choice.

3.) Its Precise and Comfortable Driving Experience

In the past, the Avalon wasn't a particularly pleasurable car to drive. Reviewers noted that it was bouncy and difficult to control. Today, however, the Avalon is a completely different vehicle. The 2015 Toyota Avalon is incredibly responsive and comes with a newly-improved shock system. The car drives like a much smaller vehicle and handles well on difficult roads and uneven surfaces. Simply put, the 2015 Toyota Avalon's tight, precision-controlled driving experience is better than ever before.

4.) Its Performance is Top-Notch

The Avalon Hybrid and the standard 2015 Toyota Avalon are extremely speedy and performance-oriented cars. The hybrid sedan offers performance specs that are on-par with the gas-only Avalon, a true feat for a large hybrid vehicle. The V-6 Toyota Avalon goes from 0 to 60 in under 7 seconds, for instance, whereas the Avalon hybrid hits 60 in just over 8. In regards to responsiveness and speed, both Avalon models are truly unbeatable.

5.) Great Features at Every Trim Level

Regardless of the trim level chosen, drivers are sure to be happy with the features offered by the Toyota Avalon. Even at its base trim, the Avalon comes equipped with heated leather seats, a back-up camera, and a Smart Key entry system. Other trims offer a variety of additional features, including a sunroof, blind-spot monitor, rear cross-traffic alert system, and paddle shifters. At all trims, the Avalon is a first-class sedan.

The 2015 Toyota Avalon is poised to secure some of the top safety ratings of the year. The Insurance Institute for Highway Safety has rated the vehicle as "good" in almost all areas. Toyota anticipates that the vehicle will receive a five-star rating from the National Highway Traffic Safety Administration as well. The sedan comes equipped with anti-lock brakes with brake assistance, ten airbags, and an electronic stability control system. All models feature a rear-view camera as well. All in all, the Avalon is an exemplary vehicle regarding safety and security features.

7.) It Comes in an Assortment of Eye-Catching Colors

Sedans are not often recognized for their interesting color palettes. The Avalon, however, stands out from the pack, offering drivers nine different color options, starting at the vehicle's base trim level. Though many of these options are straight-forward, such as Celestial Silver and Magnetic Gray, the car is also offered in a number of unique shades, including Parisian Night (blue), Ooh La La Rouge, and Sizzling Crimson. Drivers looking for a bold and expressive sedan will love the color options available for the Avalon.

8.) It's Convenient for Storage and Travel

The 2015 Avalon makes the most of its generous cabin space. The back and front doors feature built-in storage bins, and a large center console offers plenty of storage space for front-seat passengers. The sedan also offers a leather-capped storage container specifically designed for smartphones, an especially useful feature for today's drivers. The vehicle also features a large trunk and back seats, making travelling and grocery shopping a breeze.

9.) It's a High-End Vehicle at an Affordable Price

Though the 2015 Toyota Avalon isn't a bargain vehicle, the sedan is well worth its price. The Avalon offers better fuel economy and safety features than competitors' similarly-priced sedans, making it a truly smart buy. For drivers who can spare a few additional dollars, it is well worth it to upgrade to the Avalon Hybrid. With its incredible mileage and lowered gas dependency, the hybrid is quite affordable in the long-run.

10.) Driving the Avalon is Comfortable and Fun

With premium leather-trimmed seats and an incredible infotainment system, driving the Avalon is comfortable and extremely relaxing. The vehicle comes equipped with the Entune App Suite at a number of trim levels, allowing drivers to search for restaurants, stream music, and purchase movie tickets with ease. Rain-sensing wipers and a Smart Key entry system make the Avalon easier to use than ever before. The driving experience has never been more fun than with the 2015 Avalon.
Buying Tip: To avoid overpaying on a new car, shop prices online first. Get up front pricing before you walk into a dealership. We recommend the following free services; Car Clearance Deals, NADAguides, CarsDirect & Motortrend.
These free services will offer you the lowest prices and supply you with multiple competing price quotes. You will know the best price before you visit the dealer.

Reasons Not to Buy a Toyota Avalon - The Cons

Though the Avalon handles winding roads with ease, this large sedan is far from being a sports car. If you're looking for a truly exciting and powerful driving experience, the Avalon might not be the right car for you.

2.) It Has a Conservative Exterior Design

Though the Avalon's 2013 redesign freshened up the sedan's exterior, the vehicle is still aimed at an older audience. 20 and 30-somethings may find that the Avalon's design is too conservative for their tastes. The Avalon is targeted at an older adult audience, which is reflected in the car's design.

Though the Avalon is worth its price, the sedan is still costlier than many vehicles on the market. Hybrid versions of the vehicle, for instance, tend to cost upwards of $35,000. For many buyers, such a high price tag is a deal breaker.

The Avalon holds its own when compared to other full-sized sedans such as the Ford Taurus, Kia Cadenza, and Chrysler 300. The Avalon averages better MPGs at both city and highway speeds compared to all three rival sedans. Though the Taurus, Cadenza, and 300 all offer slightly bigger fuel tanks than the Avalon, these sedans do not offer nearly as comfortable a ride for backseat passengers.

All in all, the 2015 Avalon offers drivers a spacious, luxurious, and fuel-efficient driving experience that leaves other sedans in the dust. Regardless of the trim level chosen, the 2015 Toyota Avalon is a spectacular sedan that will satisfy most drivers.
New Car Buying Guides: