2015 Toyota Corolla Pros vs Cons. Should You Buy? 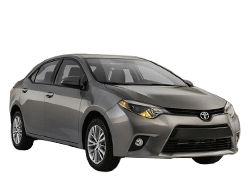 Should You Buy a 2015 Toyota Corolla? Here Are Some Reasons For and Against

If you’re thinking about purchasing a brand new vehicle in 2015, consider the pros and cons of the new 2015 Toyota Corolla. Toyota is still riding the momentum of the big 2014 Corolla overhaul, and they’ve added to it even more features that every car owner craves. There’s more of what consumers want: more modern technology, more space in the front, back, and trunk and, most importantly, more of the same low prices.

The Corolla is the car for the conservative consumer. The consumer who knows the value of ease-of-access, and agrees that a darker shade of black in the interior is an accent color. It’s made for people who buy a car for the reason why cars were invented in the first place: to go from point A to point B. And with the Corolla you’ll make it to point B safely. If you value frugality and dependability over style, and the longevity of your vehicle over all of that useless glitz and glitter, this might be the car for you. Here are ten reasons to buy the Toyota Corolla in 2015 (and three reasons not to):

1) The Toyota Corolla is traditionally known for three things: reliability, simplicity, and a low price for just the right value. The 2015 Toyota Corolla doesn’t disappoint the commuter population. Buyers get everything they’ve come to expect from the Corolla and more. It starts with technology like wheel-mounted audio controls, optional keyless entry and moon roof, and rounds out with exceptional safety measures.

2) Critics and test drivers agree that this compact car now feels more like a mid-size in 2015. Toyota increased both the legroom and the headroom to add all around comfort. The backseats feel as homey as your living room couch. The five seats can be personalized with either fabric or leatherette. The front seats have also been tweaked by Toyota so that they’re more adjustable.

3) Performance. Test drivers notice a difference in how the 2015 Toyota Corolla handles. The four-cylinder engine adds a sensation of power to the driving experience. Although acceleration is still a small issue, this new model is a definite improvement.

4) If you’re moving to a new home anytime soon, or taking your kid to college or the family to another state for the holidays, the Toyota Corolla is a better choice than similar compact vehicles like the Mazda3. Along with the far more spacious interior came a larger trunk.

5) US News and World Report gave the 2014 Toyota Corolla a safety rating of 9.2 out of 10, and those same safety features will be just as good a year later in 2015. With Toyota’s Star Safety system, drivers are reassured that they’ll have control and traction backing up features such as the brake assist, the anti-lock braking system and all eight airbags. An optional backup camera makes the 2015 Toyota Corolla safer whether it’s going forward or in reverse.

6) Simplicity. The more complex modern technology gets, the more consumers have come to value the ease of minimalistic controls. Cell phones got too small and have started to grow large again. Dashboards got too so “busy” with all of the dials and levers that drivers found themselves distracted by so many options. The Corolla’s dash doesn’t distract the driver or the passenger. Fewer “bells and whistles,” or in this case “beeps and boops,” improve safety for all.

7) The Corolla’s infotainment system is called Entune. Entune beats out all other models with its improved sound and connectivity. A few sins are covered well by a strong sound system.

8) Corollas don’t have Wi-Fi for the passengers, but for the occupant who really matters, the driver, there’s a USB port, Bluetooth, and an audio jack.

9) The 2015 Toyota Corolla is first and foremost affordable. It’s consistently ranked high in this category among other small cars, most recently number fourteen out of forty. It’s a particularly smart buy for the common commuter.

10) Everyone agrees that good mileage is vital no matter which direction the economy is going. The Corolla’s miles-per-gallon rate is 27 on the city streets and 36 on highways. Compare that to Scion xB and the Chevrolet Cruze which only get their drivers 22 miles in the city, and the Volkswagen Beetle with its 29 mpg on the highway.

Reasons Not to Buy a Toyota Corolla - The Cons

1) Don’t buy the Toyota Corolla if you want a car that impresses your friends and makes your co-workers jealous. Recent revamps to the exterior, particularly the length of the car, give it a more “sporty” look, but the style is hardly drool-worthy. It’s not worth showing off but at the same time your kids won’t disown you when you pick them up from school.

2) Although test drivers don’t find the steering as sluggish as it used to be, it’s still far from the sharp and crisp handling of the Ford Focus. If you’re in a Corolla it’s best to stay away from high-velocity turns!

3) Corollas aren’t built to win races. Speed is not one of its strengths. One criticism is that the car can feel more like a boat at times even at full-speed on the highway. It can be slow to accelerate especially from a complete stop. The Ford Focus handles better in its steering, it’s “feel” and acceleration. The Focus, as alternative to the Corolla, has many of the same pros and cons, the biggest pro being that it’s for the flashy rather than the frugal.

The 2015 Toyota Corolla is right for you if you’re cost-conscience, informed, and smart. After reading this article you’re certainly informed about this car, and undoubtedly you’ll make smarter choices because of that. The question that remains is will you opt for the low price and high value of the Corolla, or will your wallet get seduced by cars that are all show and little substance?