2015 Toyota Prius Sedan Pros vs Cons. Should You Buy? 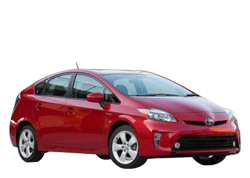 Should You Buy a 2015 Toyota Prius Sedan? Here Are Some Reasons For and Against

The 2015 Toyota Prius Sedan is the latest model in the Toyota Prius line of hybrids first introduced in the US during the 2001 model year. Positioned between the Prius C, a lighter and somewhat sportier model, and the Prius V, a larger and heavier wagon model, the mid-size Prius Sedan, called simply Prius, has 5 passenger doors and a rear hatchback. Its fuel mileage of 51 mpg city/48 mpg hwy is unbeaten by any other US hybrid or gasoline fueled car.

1) The distinctive aerodynamic shape of the Toyota Prius and its angular futuristic shape made an immediate impact at its debut and remains an immediately identifiable classic today. The sloping nose and high truncated rear end proclaim aerodynamic efficiency and also provide excellent passenger access into the vehicle, rear headroom and cargo space that almost rivals that of an SUV.

2) The 2015 Toyota Prius is a highly versatile car. The rear offers 60/40 split-folding seats, while the hatchback provides more cargo room at 21.6 cu ft than a typical mid-size sedan. The interior is roomy enough to hold four adults comfortably or five for shorter distances. The rear seat is spacious enough to hold adults with sufficient leg room thanks to the carved-out front seatbacks.

3) The Prius rates high on safety with a Top Safety Pick+ from IIS, the Insurance Institute for Highway Safety. It also rates a five-star overall from the NHTSA, the National Highway Traffic Safety Administration. Outward visibility is excellent in front due to the sharply dropping hood, and while the rear view mirror shows a horizontal line due to the two-paned window, the Prius offers an optional rearview camera to compensate.

4) The collision safety features start with a strong body structure, seven airbags including one at the driver's knee, anti-lock brakes, stability and traction control and a tire-pressure monitoring system. A "Hill Start Assist" feature helps the driver when starting the car pointed uphill.

5) Special optional electronic safety systems include radar-based adaptive cruise control, a lane-departure warning system and a Toyota "Safety Connect®" system that contacts emergency responders in the event of an accident that triggers one or more airbags. For nervous city drivers, Toyota also has a helpful feature called "Intelligent Parking Assist" system that automatically steers the car into a parallel-parking spot while the driver provides braking and acceleration.

7) Prius options include a solar-roof package, with photovoltaic cells that power fans to pull hot air out of the cabin while it's parked and reduces the air-conditioning load when the car powers up. There is an option to turn on the air conditioning before you enter the car. For summers in a hot location, these are extremely worthwhile investments. The airconditioning also runs off the electric battery which avoids penalizing the gasoline mileage.

8) Fuel economy is the primary aim of the Prius, and its powertrain is optimized for those drivers who drive with a gentle foot on the gas peddle. Besides the normal mode, the engine has a Power mode, a lower-powered Eco mode, and an electric-only "EV" mode, in which the engine operates only using the electric battery for a maximum range of 1 mile. With a combination of driving habits such as coasting up to stoplights, and using the EV mode for the last 1 mile of travel, it's possible to achieve as much as 60 mpg on occasion.

9) The Prius comes with a three-year/36,000-mile bumper-to-bumper warranty, a five-year/ 60,000-mile powertrain warranty, and an eight-year/100,000 mile warranty on the hybrid components. The Prius has excellent reliability apart from a recall in 2014 for an electrical system software issue.

10) The Prius is the best-selling hybrid in the world, an excellent all-around car with instant ecological identity. It was a finalist in 2014 for Best Hybrid Car for the Money and Best Hatchback for Families. In earlier years it was rated the Motor Trend Car of the Year, the North American Car of the Year, the European Car of the Year and the International Car of the Year. In addition, the Prius was named 1 of the 10 best cars by Car and Driver magazine.

1) Handling of the Prius is best when driving moderately. Any hard acceleration is delivered with hesitation and surging, with the gasoline engine droning or revving at odd times. The braking can suffer in the transition from friction braking to regenerative braking. The wheel turning feels unresponsive and there is body roll due to the thin tires that come with the base model.

2) The many dials on the dashboard can be somewhat chaotic in appearance, especially in comparison with the more smoothly worked design of the Chevy Volt and other hybrids. It's difficult to read the digital gauges, and even harder when wearing sunglasses.

3) The interior appearance though futuristic appearing twelve years ago when it first debuted, can appear in the base model as a lot of hard plastic built with economy in mind.

The 2015 Honda Accord Hybrid is a strong competitor with a similar level of standard features as the Toyota Prius. It offers the same features as the regular Accord, with smooth handling, acceleration and braking, but adds fuel economy similar to the Prius. Its sticker price however is $5000 more than the Prius, nor does its styling proclaim "ecological".

The 2015 Toyota Camry Hybrid has the manners of the Camry, a spacious cab, refined powertrain and drives like its gasoline-powered sibling, surprisingly peppy for a hybrid car. Its sticker price is $3000 higher than the Prius, and its combined mileage is 43 city/39 hwy, rather lower than the Prius and other comparable hybrids.

The Toyota Prius is a good all-around car for those who want a high mpg automobile, with ample cargo space and a comfortable ride that uses less fossil fuels and spews fewer pollutants into the atmosphere. Its distinctive appearance is a badge for those who wish to proclaim their ecological sensibilities with the vehicle they drive. The same body shape that provides aerodynamic efficiency also affords generous cargo space and adult passenger seating in the rear.
2018 Toyota Prius Trim Level Configurations: