2015 Toyota Sienna Pros vs Cons. Should You Buy? 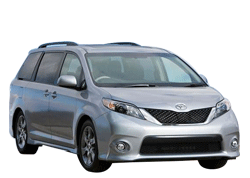 Should You Buy a 2015 Toyota Sienna? Here Are Some Reasons For and Against

The Toyota Sienna is a family minivan manufactured since 1997 in Princeton, Indiana for the North American market. It shares a revised platform with the Camry. The Sienna Limited model is the only North American minivan with all-wheel-drive. The current third generation has received a Top Safety Pick award from the Insurance Institute for Highway Safety with Good ratings in all four crashworthiness categories.

US News & World Report ranks the 2015 Toyota Sienna second best of seven minivans based on published reviews, test drives, and reliability and safety data. Toyota has made some updates to the Sienna for 2015, some substantial, some minor, to offer more reasons to buy a new model.

Top Ten Reasons to Buy a 2015 Toyota Sienna - The Pros

There are no changes for 2015 to the Sienna drivetrain and its weight is virtually unchanged, so performance is predictable: Zero to 60 miles per hour in 7.3 seconds and 15.6 seconds at 90.4 miles per hour over a quarter-mile. The 3.5-liter, six-cylinder, 266-horsepower engine certainly isn't slow as it moves the Sienna at highway speed, and at 25 highway miles per gallon too many stops for gas will not be a problem. Quick acceleration makes highway merging and passing safe and easy.

With no major changes to curb weight or aerodynamics, fuel economy ratings are steady at 18 city/25 highway/21 combined miles per gallon for front-wheel drive and 16 city/23 highway/19 combined for all-wheel drive models.

Electric power steering has replaced the previous hydraulic system. The 2015 Toyota Sienna's V6 engine accelerates strongly though noisily when under heavy load. A six-speed automatic transmission and front-wheel drive are standard, and the all-wheel drive is an unusual extra for minivans.

Stopping from 60 miles per hour takes 115 feet. All-wheel drive improves traction but adds weight, so the performance result is a tradeoff. Power to all four wheels makes a difference in fuel economy, however.

Handling is composed for a minivan, especially in the SE model, which has a sport-tuned suspension. Strong brakes and a comfortable ride are also appealing.

The 2015 Toyota Sienna is driver-friendly in adjustments to spring and shock absorbers that reduce body roll with no reduction in ride quality. Spot welds on the chassis increase body rigidity for a more solid feeling and improved handling. No minivan can handle like a sports car, but the steering is weighted nicely and body lean in turns is well under control.

The 2015 Sienna XLE feels less nautical than before in its body motions and instills a greater sense of control with no loss of comfort. Added reinforcements prompted Sienna engineers to recalibrate springs and shocks to make handling tidier and more engaging than usual from a two-ton, eight-passenger tank on wheels.

New air fin stabilizers smooth the airflow, reduce wind noise, and improve efficiency. On the SE model, sport suspension and steering make the ride even more enjoyable. And when weather conditions are severely inclement, it is nice to know that Sienna is the only all-wheel drive minivan sold in America

The available blind spot monitor is like eyes in the back of the head. With radar technology, it warns the driver when another vehicle enters a blind spot on either side. The rear cross-traffic alert provides audible and visual notice of approaching vehicles

Available front and rear parking assist sonar quickly determines the distance between the Sienna and other vehicles with audible warnings and colored signals that change with the distance.

The available Pre-Collision System uses radar to detect any threat of frontal collision, alerts the driver visually and audibly, and automatically brakes to slow the vehicle and cushion collision effects. There six separately active safety features in the standard Star Safety System™:

The 2015 Toyota Sienna has a restyled sport mesh front grille with smoked chrome trim surround, new headlights and taillights, and unique bumpers and front and rear underbody spoilers that stand out, hint at fine performance, and look undeniably inviting.

Because of its high build quality and reliable performance, the Sienna is not the cheapest of the new 2015 minivans, but its resale value is high. The Kelley Blue Book gave the 2014 models its Best Resale Value Award.

The standard three-zone climate controls feature three large dials easy to use. Unlike touch-operated buttons, the touchscreen itself is also quite user-friendly.

The old dashboard is gone, replaced by a more modern design. Climate controls are closer to the driver with a layout easier to use. The digital information screen is now easy to read in the center of the gauge cluster.

The 2015 Toyota Sienna has 150 cubic feet of cargo space behind the front seats, more than most minivans. The second-row seats do not fold into the floor but can be removed quickly and easily. Up-front storage is excellent thanks to two large glove boxes and a spacious center console.

The carpool has room for everyone in a Sienna. On eight-passenger models, the second row center seat folds upright to add an extra seat so nobody gets left behind.

The refreshed interior is one of the nicest with first-class materials and a striking design with a dashboard layout of large, user-friendly climate controls and a simple touch-screen infotainment system. The Sienna's second-row seats slide forward and backward for adjustable legroom for second-row passengers and easy access to the spacious, adult-size third row.

The dashboard design shift to the left allows the driver to reach audio, heating/air-conditioning, and other secondary controls more easily than in market competitors. The van's controls have a logical and easily recognizable arrangement.

Toyota's latest Entune entertainment and information system on all but the base model gets a seven-inch touchscreen with knobs for volume and tuning. All touch-sensitive buttons respond to input and the system changes between functions quickly with no long waits for the computer.

Getting in and out of a Sienna is effortless with available dual power sliding side doors operated by a button on the remote keyless entry, the available Smart Key fob, overhead console switches, or either door handle. Even in the third row passengers have easy access. Second-row seats slide forward to make room.

A revised suspension is new for 2015 Toyota Sienna, and handling is a bit more composed than before, especially in the SE model with its sport-tuned suspension. Braking is excellent, and the ride is very comfortable. No minivan handles like a sports car, but the steering is weighted nicely and body lean in turns is well under control.

Bluetooth, a universal serial bus port, automatic climate control, and a touch-screen audio system with a 6.1-inch display are all standard.

Reasons Not to Buy a Toyota Sienna - the Cons

The Toyota Sienna is a premium minivan and there are many reasons to buy one. But no vehicle can be absolutely perfect for every driver, so it is only fair to recognize complaints Toyota has heard.

1) More than a few drivers have said the brake pedal feels soft regardless of how hard they press on it. This apparent lack of brake pedal resistance can be disconcerting, they say, to drivers wondering whether the vehicle will stop in time even when their eyes tell them it will.

2) One new driver-friendly technology, Driver Easy Speak, is a clever idea in theory. It uses the built-in microphone to pipe front-seat conversations into the third-row stereo speakers, but in practice it is barely louder than the unassisted front-seat voices. Pumping up the stereo volume has no effect on Easy Speak, so it's easy to drown it out at moderate stereo levels.

3) Second-row seats still do not fold into the floor. The seats are removable with not much effort but then must be stored somewhere outside the vehicle. Complainants say they do not understand why Toyota cannot make them vanish under the floor as do other minivan makers.

In summary, the 2015 Toyota Sienna has added to an already excellent van upgrades that should keep it competitive against the archrival Honda Odyssey.