2015 Toyota Tundra Pros vs Cons. Should You Buy? 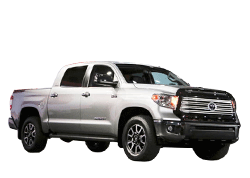 Should You Buy a 2015 Toyota Tundra? Here Are Some Reasons For and Against

“I feel the new Tundra reflects the future of where trucks are going,” said Mike Sweers. A good ole boy from Northern Michigan, Sweers uses a Tundra Double Cab when harvesting hay, tapping maple trees and raising dairy cattle on his farm. As a Toyota chief engineer, he also spearheaded the redesign of the 2014 Toyota Tundra pickup truck. “Our goal is to make the best truck in the industry,” said Sweers. “It delivers the message … we are a truck to be reckoned with in the industry.”

So is Mike Sweers right or wrong?

By law of the American Automobile Labeling Act, every new automobile must display the percentage, by cost, of its components that came from the United States and Canada. The 2012 Toyota Tundra came in second place, bested only by the Ford F-150. According to the Kogood Made in America Index, which accounts for labor, parts, and other variables, the Toyota Tundra also wins the red ribbon, beaten by the Ford F-150 but besting all pickups from Ram, GMC and Chevrolet.

All Tundras come with an integrated rearview camera and bumper surrounds. Available safety features include a glass-breakage sensor and a blind-spot monitor with cross-traffic alerts.

Since less than five percent of Tundra buyers chose the 4.0-liter V6, Toyota axed the six-cylinder and replaced it with the 4.6-liter V8. Now, every Tundra pickup comes with a workhorse V8 engine, the smallest of which still produces 310 horsepower and 327 pound-feet of torque. Both engines are mated to a six-speed automatic transmission.

Who says business can’t come with pleasure? Welcome the Tundra Limited, available in all body styles. It is equipped with dual-zone automatic climate control, leather upholstery, power bucket seats and a silver billet grille to show off to the world.

Controls – knobs, buttons, levers, etc. – are shaped and configured to be operated by drivers wearing gloves.

Homage to the Old West

Where the Tundra is now assembled in San Antonia, Texas was once the oldest working ranch in Texas, the El Rancho de la Purisima Concepcion, established in 1794. Commemorating that heritage is the exclusive 1794 Edition. Saddle brown leather and suede line the seats, the steering wheel, the doors and the instrument panel. Topnotch technology includes a JBL audio system, blind-spot monitor, and heated/ventilated seats.

The four-door CrewMax has a cabin fit for Paul Bunyan, with well over 40 inches of legroom, and can accommodate up to six passengers.

Draft horse it may be, but the Tundra does not skimp on technology. Every model comes with a touchscreen interface and Bluetooth connectivity. Upscale models offer inboard navigation system, Entune smartphone app integration, surround-sound audio systems and satellite radio capability.

In ye olden times, auto manufacturers conducted towing tests in-house and released the results without any objective eye to “grade” their performance. In 2008, the SAE developed the reliable, hard-hitting J2807 standard for tow ratings. It was adopted by Toyota in 2013. So when the Toyota Tundra with the iForce 381-horsepower V8 promises a whopping 10,400 pounds of towing capacity, it can be trusted.

Reasons Not to Buy a 2015 Toyota Tundra - The Cons

• Horsepower may be more glamorous, but fuel efficiency saves money to pay the bills. With one V8 rated at 15/19 mpg and the other at 13/18, neither engine promises much in the way of fuel economy.

• Driving a Tundra truck is like riding one of Hannibal’s elephants. Its large turning circle and stiff ride make it unsuitable for urban motoring.

• There is no diesel offering.

• Since it is a foreign brand, Toyota replacement parts tend to be more expensive than General Motors (Chevy, GMC) components. Digging under the hood takes more than a thick wrench; it takes a thick wallet.

How the 2015 Toyota Tundra Stacks Up to the Competition

The American pickup market is dominated by four major players: Ford F-150, Chevy Silverado 1500 (twin brother to the GMC Sierra 1500), Ram 1500, and far out on the periphery, the Nissan Titan.

• Where the F-150 trumps the Tundra is fuel economy. Based on a featherweight aluminum body and sporting a 325-horsepower 2.7-liter EcoBoost V6, the F-150 achieves an astonishing 22 mpg. Whether the aluminum body will resist the rigors of outdoor work remain to be seen.

• No other truck offers as nice, comfortable, luxurious a ride and interior as the Ram 1500. Its coil spring suspension smothers bump and ruts in a way that the Tundra simply cannot. It also offers a class-exclusive turbocharged diesel V6 engine that can tow up to 9,200 pounds.

• Unlike the Tundra’s other competitors, the old-as-dirt Nissan Titan poses no formidable danger to the Toyota pickup truck. Not much has changed since the Titan’s introduction in 2004, and its most impressive numbers are its rebate discounts.

• Chevy completely overhauled the Silverado and Sierra twins for the 2014 model year, and the results are impressive. Its custom-designed EcoTec engines are powerful and fuel-efficient; its interiors are comfortable and stuffed to the brim with communication and safety technologies.

Never has the American truck market been so competitive. Customers have their pick of pickup: the renovated Chevy Silverado, the class-favorite Ford F-150, or the urbanized Ram 1500. But for the best of all worlds, it is hard to best the 2015 Toyota Tundra. Thanks, Mike.