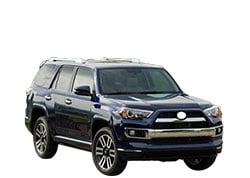 Should You Buy a 2016 Toyota 4Runner? Here are the Pros and Cons

The big hype about the 2016 Toyota 4Runner is the exhilarating experience it gives on the rocky terrains. Take the off-road factor out of the picture and critics argue that this new 4Runner handles poorly on the tarmac. However, the Toyota 4Runner will come with a fully upgraded infotainment system, a delight for those who wished to have more control on their entertainment and what not.

One of the biggest competitions the 4Runner will face is the release of the 2016 Honda Pilot. Aesthetic wise, critics favor the Honda though it looks more suited to the city life with few off-road capabilities. Enough said; comparing the two SUVs side by side will determine the ultimate winner.

A 4L V6 engine revs under the hood with horsepower rated at 270hp. The powertrain gives dominance to the rear wheels, which is ideal for picking up speeds when tearing through terrains. The 2016 Toyota 4Runner will be released in 9 distinguished trims, all on a 5speed automatic shift; the manual shift is not yet mentioned with this new model.

EPA ratings have remained constant delivering an mpg of 17 city and 22 in the highway. Compared to the 2016 Honda Pilot, the 4Runner falls short; Honda boasting of EPA ratings of 19 city and 27 highway. Perhaps the reason the Honda is well suited for the city while the Toyota 4Runner reigns in off-road terrains.

The fact that Toyota keeps throwing in a new tweak for the 2016 4Runner models is commendable, and for 2016 consumers will delight in the all-new infotainment setup. Test drivers argue it will be much easier to use and bring controls to the driver’s disposal. 4Runner loves will still get the same supply of entertainment options namely Satellite Radio, AM-FM Radio, MP3 Player, CD Player, HD Radio and Auxiliary Audio inputs.

4) Plenty of Colors for the Exterior

There are six different hues the consumer can choose for their new 2016 Toyota 4Runner. There are about four metallic options in midnight black, magnetic gray, Barcelona Red and classic silver. The standalone hues include nautical blue and pure white.

For those who loved the sturdy off-road look in the 2015 model, it has been maintained on the new release as well. The front spoiler looks decent enough with no fancy touches, and it’s the same for the rear end. Toyota didn’t put that much effort to give it that classy SUV look like the Honda Pilot, but it’s understandable since this is a car not built for the city.

But even with an above average looking body, the interior is where the magic happens. The seats are made from quality cloth with color schemes that complement the outside hue. The cabin has a 3-row setup, and critics argue that the first two rows are the most spacious, but the same cannot be said above the 3rd row, but perhaps this is where the little ones will be designated as a family SUV.

Besides the new-look infotainment system, there are plenty other built-in controls for smooth driving of the 2016 Toyota 4Runner. Cruise control is available to set one’s speed limits, and the steering wheel is adjustable and leather wrapped for better controlling. The headlights switch off automatically, and fog lamps are incorporated as well for crisp viewing of the road even in bad weather. Additional tweaks to look forward to include:

If one is tearing through the wilderness in an off-road SUV, one thing to have in mind is having enough fuel. The 2016 Toyota 4Runner gladly addresses that, with a 23-gallon tank sufficient to last several miles before the next refill. The Honda Pilot 2016 falls behind with a 19-gallon tank. This doubled with the Toyota’s impressive fuel economy gives every reason consumers would prefer it over the Honda Pilot.

Safety comes first with every Toyota SUV model, and the 4Runner is fully reinforced for passenger protection. A 4-wheel ABS braking system complemented with Brake Assistis implemented in the Sports SUV, which is a standard feature in most SUVs in range. Airbags surround the entire cabin from the driver to the passenger’s side. Additional road safety measures include:

The 2016 Toyota 4Runner may start of at a higher price than the Honda, but the maximum one can purchase it for is a lot less. It cost about $2000 less on the higher side and still offers the best features to rule the off-road terrains compared to the Honda Pilot 2016.

Critics argue that the 2016 Toyota 4Runner is designed more for rough roads and handles poorly on smooth tarmac. The Honda Pilot 2016 is way ahead on this one and even boasts a better fuel economy in the city. Even the 4Runner’s interior is built from durable materials thus has little to do with aesthetics.

One would expect the entire cabin to be spacious for a family SUV, but that’s not the case. Many users complain that the third row is quite cramped and wouldn’t fit an adult. The Honda Pilot is fully redesigned, and the third row has all the space one would need.

5-speed is a thing in the past, and 2016 Toyota 4Runner is really falling behind compared to Honda’s 6-speed transmission.

With only a few setbacks to worry about, the 2016 Toyota 4Runner is a definitely choice for the wanderlust whose heart is in the wilderness. On the other hand, critics argue it is better to go for a different SUV if the sole purpose is to travel around the city and highways.

• 2018 Toyota 4Runner trim levels. What you get with each trim configuration.