2016 Toyota Camry Pros vs Cons. Should You Buy? 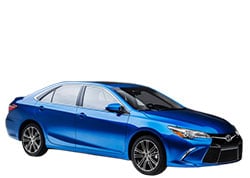 Should You Buy a 2016 Toyota Camry? Here are the Pros and Cons

The Toyota Camry was launched into the US market mainly as a front-wheel-drive alternative for the Corona that was rear-driven. That initial Camry, which was quite basic and boxy, won over the masses in the U.S. This is because they had gotten to a point of extreme frustration due to the quality and the unreliability of domestic-brand vehicles.

The subsequent models of Camry became more refined, a little larger, certainly more luxurious and comfortable with each new generation. The Special 2016 Edition Camry model package announced by Toyota brings unique styling elements and is widely based on the earlier Camry SE.

The 2016 Toyota Camry has been given praise for its responsive handling and smooth ride with a sporty touch.

Test drivers agree that the base Camry’s 4-cylinder engine holds quite well on its own. It accelerates well enough, although the optional V6 is what steals the entire show with its apparent lack of effort and seemingly endless powerful thrust.

The redesigned 2016 Toyota Camry qualifies as being among the easy-to-drive and most comfortable midsize sedans you can acquire today in the US market.

Regarding a hushed cabin, the 2016 Toyota Camry is certainly among the leaders in that car class.

A new dashboard and stylish materials make the 2016 Camry look quite modern.

Critics appreciate the amount of space available in the Camry’s trunk, terming it as generous. The 2016 Toyota Camry trunk brings a 15.4 cubic feet cargo capacity, which is way above the average for that class.

Reviewers indicate that the seats are spacious and comfortable, holding five. Whichever trim is chosen, the Camry’s backseat is spacious with ample head and legroom plus excellent under-thigh support for passengers who are taller.

Improvements done on the design of the Camry have enabled it to realize Top Safety Pick+ level from IIHS, with ‘Good’ ratings for all categories. The same safety features have been brought into the 2016 Toyota Camry, which now also includes the newly introduced for small-overlap crash testing.

The NHTSA has so far not issued any safety recalls on the 2016 Camry. Because it is still a new launch, there is no current reliability data available for the new Camry.

The new Toyota car is without a shred of doubt a better package than what it is replacing. It is also by far more competitive compared to the 2015 model and gives contemporaries like Honda and Hyundai a run for their money.

Some auto critics have argued that the time-tested Camry engines have by now outlived their expiration date.

Critics have noted that despite the upscale materials in the Camry’s interior, the trims still lack the feel of being anything special.

The graphics of the infotainment system aren't as crisp as would be expected. The Entune touch screen is a standard 6.1-inch version.

A number of auto reviewers have pointed out that the 2016 Toyota Camry’s fixed rear headrests could inhibit the proper securing of a child in the front-facing seat.

4) Not Very Sporty or Engaging

The Toyota Camry has been said to lack in what would be called an engaging experience as you drive. Also, the car cannot be said to be sporty.

Auto experts have contrasted the 2016 Toyota Camry against the 2016 models of Ford Fusion Hybrid and the Honda Accord.

The 4-door mid-size Toyota Camry sedan has become widely known for a roomy interior, reliability, decent gas mileage and a comfortable ride. The Camry continues providing a variety of options regarding powertrains that ought to meet the needs of any shopper in the market for a mid-size sedan.

• 2018 Toyota Camry trim levels. What you get with each trim configuration.