2016 Toyota Corolla Pros vs Cons. Should You Buy? 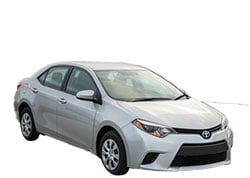 Should You Buy a 2016 Toyota Corolla? Here are the Pros and Cons

Each year, the Toyota Corolla is among the 10 best-selling cars in the country. Drivers have grown to appreciate the compact sedan’s dependability and fuel efficiency. Because of its impressive amount of rear-seat legroom, the 2016 Toyota Corolla is a very rewarding family vehicle. Car shoppers will also value the Corolla’s excellent crash protection.

There have not been any major changes for the 2016 model year. However, the sedan does feature an improved Entune audio system. Toyota also offers a new Special Edition version.

Drivers will love the Corolla’s great fuel efficiency. Even the least efficient version is rated at 36 mpg on the highway. However, the specially tuned LE Eco trim can return a remarkable 42 mpg. The car’s fuel-saving design is a big advantage for the drivers who do a lot of traveling.

The Corolla is a well-engineered driving machine that can last for a very long time. In fact, it is not unheard of for the compact car to rack up more than 400,000 miles. Aside from the Corolla’s required servicing, owners are unlikely to spend a lot of money in repairs.

All versions of the 2016 Toyota Corolla come equipped with the same 1.8-liter engine. With a total output 132 horsepower and 128 pound-feet of torque, the four-cylinder engine offers just enough performance to keep most people happy. However, the engine’s top attribute is its outstanding reliability. As long as the owner changes the oil regularly, the engine should experience very few problems.

The S Plus Trim is definitely the most fun-to-drive trim in the lineup. A performance-tuned suspension enables the Corolla to offer athletic handling. Low-profile tires also help the sedan to maintain a solid grip on the pavement. While the six-speed manual gearbox is engaging to use, the optional CVT does come equipped with shift paddles.

Buyers who are looking for an extra dose of flair should check out the S Special Edition model. The car’s Absolutely Red paint job will immediately catch the attention of onlookers. Covered in a gloss-black finish, the 17-inch alloy wheels give the Corolla an even more unique look. Red stitching gives the seats and floor mats a custom look.

The 2016 Toyota Corolla welcomes its passengers to a very roomy cabin. In fact, the compact ride has more legroom in the back than the larger Toyota Camry. This should be good news for the drivers who have a family to haul around. With a cargo capacity of 13 cubic feet, the Corolla can store plenty of travel bags as well.

In terms of cost, the base 2016 Toyota Corolla starts at $17,230. This is a very attractive price for the families who are trying to save money. However, the top-of-the-line S Premium trim still costs less than $24,000. Furthermore, the Corolla is very cheap to maintain.

The base L model is an incredibly good bargain. Featuring a 6.1-inch touch-screen display, the updated Entune audio system ensures that drivers will remain entertained on their daily commute. LED running lights enhance the Corolla’s style and make it more visible to oncoming traffic. Some of the other goodies include Siri Eyes Free, a USB port, and Bluetooth technology.

Toyota made sure that its popular commuter car provides great crash protection. As a testament to the sedan’s well-built structure, the federal government gave the Corolla a solid five-star safety rating. Aside from the base L model, all of the other trims come equipped with a rear-view camera. The higher trim levels also have a four-wheel disc braking system.

10) Easy to Use Controls

Unlike some modern vehicles, the 2016 Toyota Corolla is not designed with any complicated controls. Not only are the controls simple to use, but the gauges are also easy for the driver to see. Luckily, the Corolla’s simplicity does not ruin its overall style.
Buying Tip: To avoid overpaying on a new car, shop prices online first. Get up front pricing before you walk into a dealership. We recommend the following free services; Car Clearance Deals,   Edmunds,   CarsDirect,   NADAguides  &  Motortrend. These free services will offer you the lowest prices and supply you with multiple competing price quotes. You will know the best price before you visit the dealer.

Reasons Not to Buy a 2016 Toyota Corolla – The Cons

Drivers who are seeking blistering-fast acceleration will be disappointed with the new Corolla. Although the Corolla will have no trouble with merging onto the highway, it is far from being a muscle car.

2) Base Transmission is Outdated

The base model offers a four-speed automatic transmission as an option. Its performance is best described as adequate. The available CVT performs smoother and helps promote better fuel efficiency.

While the S Plus trim handles well, the standard Corolla exhibits a significant amount of body roll. The sedan’s unresponsive steering system also hurts its overall fun factor. Rivals such as the Mazda3 are quite a bit more nimble on the road.

Some of the familiar faces include the Ford Focus, the Honda Civic, and the Mazda3. Shoppers will be hard pressed to find a more dependable ride than the 2016 Toyota Corolla. In comparison to the new Mazda3 sedan, the Corolla offers significantly more rear-seat legroom. Meanwhile, the Civic’s new turbocharged engine may require a bit more maintenance.

• 2018 Toyota Corolla trim levels. What you get with each trim configuration.