2016 Toyota Highlander Hybrid Pros vs Cons. Should You Buy? 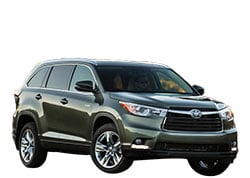 Should You Buy a 2016 Toyota Highlander Hybrid? Here are the Pros and Cons

Giving this new hybrid stiff competition is the 2016 Nissan Murano, with an equally tantalizing design and great road performance. From the test drivers and critics, there doesn’t seem to be any significant change to write home about in this new model. Which begs the question—what features will keep the 2016 Toyota Highlander Hybrid head of the Murano, and make it the ultimate luxury family SUV to go for?

At least, consumers will get the same level of fuel efficiency enjoyed in the 2015 Hybrid. Released in only two trims, the 2016 Toyota Highlander Hybrid manages an EPA of 27 while cruising through the city and 28 at highway speeds. Compared with the 2016 Nissan Murano, Toyota lovers would appreciate the heavy crushing of Nissan’s 21 mpg in the city while both SUV’s manage a tie for highway EPA; 28 mpg in both.

Test drivers commend the ample interior space with a 3-row seat set up. This perfect spacing suits the family that doesn’t need the excessive wideness of a minivan but want some fierce horsepower befitting a sports utility vehicle. When there is no passenger on board, the back seats are reclinable to create more storage space for big suitcases.

When it comes to vehicle design, Toyota never disappoints, and the consumers will get to see it in the 2016 Hybrid. It maintains the same bold shimmery look with ingenious streamlining on the front and rear. Compared to the Nissan Murano 2016, there is near identical factor in body design, but the front spoilers are the giveaways.

The 2016 Toyota Highlander Hybrid features a V6 engine under the hood reinforced by several electric motors. Both trims are delivered on an automatic transmission that revs up the engine to deliver fierce torque to the all-wheel drive train. While cruising on the streets, the front wheels are normally engaged with great handling and balance the driver would enjoy. On the other hand, when speed is a necessity, the rear wheels take over managing an acceleration of 0-60mph in approximately 8 seconds.

Consumers will still be happy about the nine rich options in body-color palette. For pearls, there are two options of Blizzard and Shoreline Blue. There are three shades of Mica; Crème Brulee, Ooh La La Rouge, and Predawn Grey. Lastly, there is a metallic which consists of Nautical Blue, Silver Sky, Alumina Jade and Midnight Black.

All seats for the 2016 Toyota Highlander Hybrid are covered in pure leather and fitted with memory seat technology. The driver seat has additional cooling/heating technology and lumbar support for maximum comfort while steering on the road. For additional sitting space, there are bucket and quad bucket seats at the back, bring the total sitting capacity to about seven passengers.

7) Entertainment on the Go

Besides the lush array of powered leather seats to relax while driving, there are great entertainment options on board as well. The standards include:

The sound system can be upgraded to better quality upon request.

The dashboard is quite straightforward with everything labeled out clearly and located within reach. The steering wheel is fitted with several control to make different kinds of commands on the go, can be powered steered and set on cruise control when not speeding on highways. More expedient buttons to press on the go - include:

To keep the full family on board safe, there are airbags fitted to protect both the driver and passengers against impact. For extra safety, there are side airbags and rear head airbags as well. The braking system is an all-wheel ABS with reinforcing features like braking assist, traction control, and electronic stability controls. Child lock safety is included as well as blind spot monitoring and Lane-Departure alerts.

As test drivers and consumers agree, the 2016 Toyota Highlander Hybrid has an impressive pick on speed as a family car. It goes without saying that the Hybrid will need a reasonable fuel capacity, and about 17 gallons is a good bet. Though it comes below the 2016 Murano’s 19-gallon capacity, it still takes the lead for best fuel economy. Both trims will solely run on Hybrid fuel though there are talks of a gasoline powered engine to be out as well.
Buying Tip: To avoid overpaying on a new car, shop prices online first. Get up front pricing before you walk into a dealership. We recommend the following free services; Car Clearance Deals,   Edmunds,   CarsDirect,   NADAguides  &  Motortrend. These free services will offer you the lowest prices and supply you with multiple competing price quotes. You will know the best price before you visit the dealer.

Reasons Not to Buy a 2016 Toyota Highlander Hybrid – The Cons

Nothing has changed much: same body design, same colors, and same interior. For the Toyota lover who hoped for a tweak here or a new feature there, disappointment lays ahead. Why Toyota chose not to throw in new tweaks is a puzzle because the Hybrid will face stiff competition from the 2016 Murano, which is a definite improvement from the 2015 model.

Critics still argue the 2016 Toyota Highlander Hybrid is asking for too much money for an SUV in its class. Moreover, the price is quite unreasonable since the same level of engineering is provided with no new tweaks to write home about. The 2016 Nissan Murano is cheaper and yet another reason Toyota will face gruesome competition.

The brakes still don’t offer that smooth handling consumers wished for. The same touchiness is to be found in the 2016 Toyota Highlander Hybrid, despite the many protests made in 2015.