2016 Toyota Land Cruiser Pros vs Cons. Should You Buy? 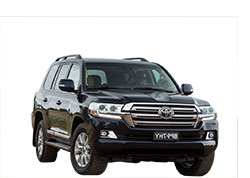 Should You Buy a 2016 Toyota Land Cruiser? Here are the Pros and Cons

The Land Cruiser is one of the oldest and longest running car lines in the world. Originally introduced in 1951 as a larger military style car, it found itself competing with Jeep and similar vehicles. Toyota continued producing the car as an off-road vehicle until the late 1960s when it decided to improve the comfort of the interior. The automobile manufacturer keeps making off-road versions of the Land Cruiser and comfort oriented versions for use today.

The 2016 Toyota Land Cruiser is the flagship SUV from the automobile manufacturer. Its latest model now combines all the power of an off-road SUV with the comfort of a luxury vehicle. The new exterior features LED headlights that can operate low or high on the road and a chrome body made from new sheet metal. New safety features, Apple connectivity, and eight seats come standard too.

The Toyota Safety Sense-P is a brand new system available on the 2016 Toyota Land Cruiser. This system alerts drivers when they change lanes, need their high beams or are about to collide with another vehicle. Drivers can also use this system to reduce the risk of hitting vehicles behind or alongside of them.

The Land Cruiser has lots of features designed with accident prevention in mind. A monitoring system alerts drivers of vehicles and objects in their blind spots and projects an image onto the center console. It also comes with a rear camera and feature that alerts drivers of traffic behind them.

As a luxury SUV, the Land Cruiser isn't an affordable vehicle, but it does have a price tag on par with similar SUVs. The base model has an MSRP of less than $84,000. Toyota offers additional trims and packages that can increase that price.

Unlike other larger SUVs that come with a manual transmission, the 2016 Toyota Land Cruiser comes with an automatic transmission that some may find is easier to drive. The 5.7L engine 346 horsepower engine uses regular unleaded gasoline. Those who want to take it off-roading will appreciate the four-wheel drive too.

Ample air bags come standard on the Land Cruiser to protect the driver and anyone else in the vehicle during accidents and collisions. Head and body air bags protect passengers in the backseat, and an air bag deploys to protect the person in the front seat too. The SUV also comes with a driver's air bag and side air bags.

Drivers who want to customize their rides can select one of the six colors Toyota offers for the 2016 Toyota Land Cruiser. Those colors include magnetic gray metallic, brandywine mica, blizzard pearl and blue onyx pearl. Toyota charges extra for some colors.

Taking the Land Cruiser off-road is easier than ever before thanks to some new features like a durable and dependable suspension. That suspension will keep everyone inside from feeling every little bump on the road. It also comes equipped with a rigid body construction that can hold up to any type of road or path.

The third row of seating found in the 2016 Toyota Land Cruiser gives drivers space to carry up to eight people with them. That third row also folds down to give drivers more storage. As the cargo space is on the smaller side, many may want to fold down the seating to gain more space.

Toyota now includes LED bulbs in both the taillights and the headlights. Those bright lights alert other drivers and carry over from the headlights to underneath the grille. Carefully designed taillights sit on the back and wrap around the sides of the SUV for additional protection.

Those who travel with kids and passengers who get bored easily will enjoy the DVD entertainment system in the backseat. The system comes with two screens that measure nearly 12 inches and fit on the headrests. The 2016 Toyota Land Cruiser entertainment system connects to and works with the touchscreen console in the front seat.
Buying Tip: To avoid overpaying on a new car, shop prices online first. Get up front pricing before you walk into a dealership. We recommend the following free services; Car Clearance Deals, NADAguides, CarsDirect & Motortrend.
These free services will offer you the lowest prices and supply you with multiple competing price quotes. You will know the best price before you visit the dealer.

Reasons Not to Buy a 2016 Toyota Land Cruiser – The Cons

1) Better for the Country

The suspension and body frame construction of the Land Cruiser makes it perfect for off-road trips in the country, but it may not perform as well in the city. The vehicle is hard for some drivers, especially those of a smaller stature to handle, and it doesn't have quite the handling capabilities that drivers need on crowded asphalt streets.

Though the Land Cruiser is a higher end SUV, its interior does not hold a candle to the interior found on a Land Rover. It does have eight seats, which include a bench seat in the very back. Getting in and out of those seats, however, is a chore.