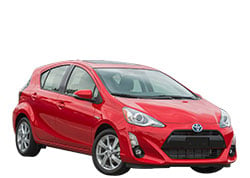 Should You Buy a 2016 Toyota Prius C? Here are the Pros and Cons

For the drivers who are looking for an ultra-efficient commuter car, the 2016 Toyota Prius c certainly deserves some consideration. The compact hatchback’s exceptional fuel efficiency and surprisingly roomy interior make it a rewarding daily-driver. Buyers will also appreciate the Prius c’s above-average reliability.

The hybrid hatchback’s performance remains the same for the 2016 model year. However, Buyers can now opt for a new Toyota Safety Sense C package. Toyota also offers a Persona Series edition for the drivers who are looking for a bit more pizzazz.

One of the hybrid’s top attributes is obviously its great gas mileage. The 2016 Toyota Prius c returns an impressive 46 mpg on the highway. Meanwhile, drivers can look forward to getting an outstanding 53 mpg in the city. The car’s fuel savings will capture the attention of the drivers who care about the environment. Toyota recommends the use of regular unleaded gas.

Attempting to park along a congested city street can be a chore. This is especially true for the drivers who live in a heavily populated area. Fortunately, the Prius c’s small size makes it extremely easy to maneuver. Drivers will not have to worry about finding a suitable parking spot. The available rear-view camera further simplifies the task of parking.

Drivers will love the hatchback’s small turning radius. If they need to get out of a tight spot, the car’s rather short wheelbase will come in handy. Not only will drivers be able to make quick U-turns, but they can avoid the hassle of constantly turning the steering wheel.

The 2016 Toyota Prius c is definelty not the fastest car on the road. However, its lightweight design makes it feel peppy in most driving situations. With a curb weight of less than 2,500 pounds, it is the lightest member of the Prius family. The car’s lack of excess weight surely helps boost gas mileage.

Despite the hatchback’s rather tiny outward appearance, it actually offers a decent sized backseat. Most adults will find the available head-and legroom to be very accommodating. This is a major plus for the parents who need to haul around their kids. The 2016 Toyota Prius c is also perfect for commuting to work or school.

Toyota designed the Prius c to offer a great deal of versatility. The car’s 17.1-cubic-foot cargo capacity will allow owners to store a lot of stuff. Because of the hatch’s wide opening, loading groceries into the back is a very simple endeavor. When needed, the rear seat can also be folded flat.

Most people will agree that the Persona Series is the most stylish trim in the lineup. A set of black wheels give the Persona Series a trendy appearance. Although the Persona Series trim comes standard with a gloss-black paint job, buyers can choose either Cherry Pearl or Electric Lime accents. A sporty grille gives it an even more unique look.

Shoppers can expect to pay less than $20,000 for a base 2016 Toyota Prius c. For that price, buyers will be rewarded with several standard features. LED headlights give the car a premium feel. Some of the other standard equipment includes a 6.1-inch touch-screen display, a four-speaker sound system, an iPod hookup, and Bluetooth technology.

The arrival of more safety innovations makes the 2016 Toyota Prius c a more attractive option. In the event of a potential crash, the pre-collision system can automatically apply pressure to the brakes. When traveling at night, drivers will like the automatic high beams. Some of the other safety technologies include a rear-view camera and lane departure alert.

Every driver can appreciate a well-designed braking system. The new Prius c has one of the best braking performances in its class. If the driver encounters an obstacle in the road, they will be able to stop quickly. [an error occurred while processing this directive]

1) Not a Quick Vehicle

With a 0-60 time of around 11.3 seconds, the Prius c does not offer quick acceleration. While the hybrid hatchback can keep pace with the surrounding traffic, its quickness will not amaze many drivers.

A CVT is the only transmission available for the Prius c. Hybrid hatchbacks such as the Honda CR-Z come with a traditional manual gearbox. This could be a factor for some car shoppers.

The hybrid’s ride quality will never be mistaken for a luxury sedan. Passengers may experience a tad bit of bumpiness on broken pavement. Test drivers will also notice a fair amount of wind noise entering the cabin.

Some of the main competition includes the Honda CR-Z and the Ford C-Max. Unlike the Prius c, the Honda CR-Z is a two-seater. It is certainly not a suitable family vehicle. The Prius c also delivers far better gas mileage. While the new Ford C-Max has received a lot of positive reviews, it fails to match the Prius c’s affordability.