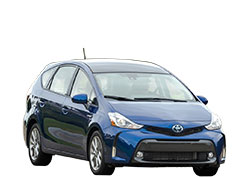 Should You Buy a 2016 Toyota Prius V? Here are the Pros and Cons

The Prius V from Toyota is a spin-off from the formidable Prius liftback, reputedly the most successful hybrid ever produced. Together with its smaller relative, the Prius C hatch, the 2016 Prius V forms part of the Prius expanded lineup. This also includes the Plug-in Hybrid edition and the standard Prius liftback.

The 2016 Toyota Prius V shares much with the Prius liftback. However, it packages everything in a wagon-like body that is longer, wider, and taller. The new 2016 Prius offers enhanced cargo space while still upholding very respectable economy figures.

The hybrid powertrain of the Prius, according to automotive journalists, seamlessly transitions from electric power to gas and vice versa.

The ride quality of the 2016 Prius V is remarkably comfortable and smooth along the highway and around town, easy to drive. The car’s braking action is swift and strong.

Several test drivers have observed that the cabin of the 2016 Toyota Prius V has a high-end contemporary design. Most auto reviewers have acknowledged the many tech features available in the new 2016 Prius v.

The smartphone app integration system and Entune touchscreen interface from Toyota works quite well. Reviewers say the system controls are clearly labeled and easy to locate.

The 2016 Toyota Prius V carries 5. Reviewers have observed that the front seats provide enough leg and headroom, and are comfortable.

Available cargo trunk space measures close to double what you get in the regular models of Prius, placing the 2016 Prius v right in the territory of SUV crossovers. Toyota has done an excellent job of having the battery pack seamlessly integrated beneath the floor.

There are plenty of storage compartments:

In the Toyota Prius V, the letter ‘V’ represents "Versatility". The 2016 Toyota Prius V is a versatile compact 5-passenger hybrid wagon that is available in 4 different trim levels: Two, Three, Four and Five.

The Two is the Prius v base model, and the 2015 V is mechanically identical, keeping up the original high fuel-economy marks. For 2016 major changes were minor, more of upgrades.

The IIHS has awarded the Prius V the highest possible “Good” rating regarding impact tests carried out on small-overlap frontal-offset and moderate-overlap impact. Also, it earned a "Good" rating for:

Overall, although the Prius V drives like the Prius liftback, it's more burdened due to the additional 300 pounds of weight.

The 2016 Toyota Prius V has been described by reviewers as being pretty bland to drive. The acceleration is underwhelming:

The handling limits of the 2016 Toyota Prius V are low. The steering effort is rather light, relaying minimal information to you regarding how the car is continuously connecting to the highway or road.

The 2016 Toyota Prius Vhas been compared with Subaru Outback and the Volkswagen Golf SportWagen 2016 models.

Giant auto maker Toyota has shaken the automobile industry with the 2016 Prius Hatchback redesign, although it will take on the minimum one model year before the market can see the Prius V wagon.