2016 Toyota Prius Pros vs Cons. Should You Buy? 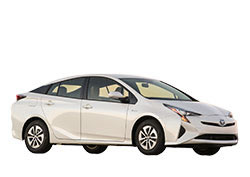 Should You Buy a 2016 Toyota Prius? Here are the Pros and Cons

The Toyota Prius has consistently been ranked as one of the most popular and fuel-efficient hybrid options. The 2016 model year appears to be well-poised to continue this trend.

The 2016 Toyota Prius offers a more traditional driving experience than previous models. Buyers can now choose between two batteries, and this has an impact on the price point. Additionally, the interior and cargo area has been retooled to provide more useful space.

The 2016 Prius makes a departure from the performance of previous models by handling more like a standard, non-hybrid vehicle.

If you are looking for a hybrid to improve your fuel efficiency, the 2016 Toyota Prius is a wise choice.

The 2016 Prius has been tweaked to offer a more standard driving experience, and the interior of the vehicle has become blissfully quiet as a result.

The interior of the 2016 Toyota Prius features many improvements over last year's model.

The Insurance Institute for Highway Safety has given the 2016 Prius models an average rating of Good, which is the top score available.

Hybrid cars often have a lack of cargo space, but the 2016 Toyota Prius does not have this issue. In fact, the Prius' increased cargo space now rivals all hatchback models, including standard fuel options.

Consumers can choose between six different trims, and each has its own unique styling features. These trims come in three categories: Two, Three and Four.

Standard features such as heated power folding door mirrors are available for each 2016 Toyota Prius model. The upgraded Three and Four trim levels expand upon the basic model with practical bonus features that enhance the driving experience.

The latest Prius is never going to compete with a sports car, but the acceleration has been improved.

Fuel prices have been dropping nationwide for several months, which makes the initial investment in this hybrid less enticing. Individuals who are concerned about being eco-friendly may prefer a plug-in car.

2) The Back-End Design is Not Aesthetically Pleasing

The front and sides of this year's Prius offer a nice improvement over the 2015 model, but the back-end is the vehicle's least attractive feature.

3) The Prius Two Lacks the Most Exciting Features

The base model has many features that make it worthwhile, but budget shoppers do not have the option to upgrade the Two to include the new battery, alloy wheels, and the add-on packages.

The 2016 Toyota Prius is commonly compared by reviewers to the Hyundai Sonata Hybrid and the Ford C-Max Hybrid.

The 2016 Prius has been boosted by performance and styling updates. This hybrid now offers a smoother, quieter ride that is no longer plagued by a loud, labored sounding acceleration. The base model provides an impressive 50 MPG during city driving, which makes the Prius a solid choice for people who are looking for a fuel-efficient vehicle. Although the back-end styling leaves much to be desired, the other interior and exterior revisions are all nice additions.

Ultimately, the 2016 Toyota Prius is a solid choice for anyone who is looking for a reliable hybrid. It is likely that the new models will keep Toyota at the top of the hybrid world.
2018 Toyota Prius Trim Level Configurations:

• 2018 Toyota Prius trim levels. What you get with each trim configuration.