2016 Toyota Tacoma Pros vs Cons. Should You Buy? 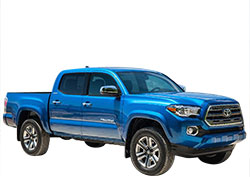 Should You Buy a 2016 Toyota Tacoma? Here are the Pros and Cons

The Toyota Tacoma forms part of a long-standing production line of pickup trucks dating back to the good old Hilux and what was simply referred to as the Toyota Pickup. Ever since the original Tacoma was introduced in 1995, the model has upheld a loyal club of proud owners by constantly supplying different powertrains, body styles, and more particularly, by offering a few special editions mainly targeting off-roaders.

The new 2016 Toyota Tacoma is available in a choice of 4 or 6-cylinder power, either rear-drive or AWD. You will also have a choice between box and cab configurations. Being the decade’s best-selling mid-size truck, the Toyota Tacoma is getting huge updates for the new 2016 model year.

The Tacoma comes all-new for 2016. The truck has received a restyling inside and out. Now it really looks great with the aggressive sheet metal. The design team seems to have taken inspiration from desert racing giving the new 2016 Tacoma.

Most automotive reviewers believe that the 2016 Toyota Tacoma is delivering acceptable levels of performance.

The new Tacoma has the capability of hauling close to 1,620 pounds and towing close to 6,800 pounds.

The majority of test drivers agree that they have only tested the V6-powered Tacoma Toyotas.

Body roll of the Tacoma is restrained and gradual. There's a general engine coordination making the trip enjoyable. Perhaps the best feature is the steering, offering you a solid sense of direction, as you bend in and out of sharp corners.

Test drivers concur that the TRD Off-Road Tacoma has proven extremely capable beyond the paved road.

A variety of off-roading aids are available:

These aids contribute to the Tacoma’s off-road prowess and works with the vehicle’s 2-speed transfer case towards making your forays into the rough backcountry more fun.

Most auto journalists concur that the cabin of the 2016 Toyota Tacoma is assembled using high-quality materials.

Test drivers and reviewers like the straightforward Tahoma controls on the center stack. Features include:

Test drivers indicate that the bed of the Tacoma is deeper than before, meaning you can haul more cargo.

The IIHS rated the 2015 Tacoma “Good” for most of the safety tests. Among its peers, reviewers have rated the midsize dimensions and precise handling of the Tahoma as easy to control, especially in case of emergencies. The Toyota Tacoma also comes with the Toyota Star Safety System.

Being a new truck model, crash-test ratings and safety scores aren’t available yet.

Reasons Not to Buy a 2016 Toyota Tacoma – The Cons

The 4-cylinder 2.7-liter engine has somehow managed to get itself into the new truck. That means you are getting 180 lb-ft of torque and a meager 159 horsepower.

On the average road, the Toyota Tacoma rides just like what it is; a typical truck. Because of the solid axle rear end and separate frame, the Tacoma generally tends to bounce over the road surfaces, even when they look fairly smooth.

If the 2016 Toyota Tacoma has a major interior drawback, then that it's the cramped cabin.

Auto reviews have compared the 2016 Toyota Tacoma with the 2016 models of the Chevrolet Colorado and GMC Canyon.

The Tacoma has for years been the prime choice for outdoor enthusiasts, off-roaders, and professionals in need of a quality truck without the bulkiness that comes with full trucks. The capability, predictability, and reliability of the Tacoma have created one of the most formidable pickup reputations out there today.

The Tacoma from Toyota has had an enjoyable and long reign as the undisputed king among midsize pickups. However, with increasing levels of competition, the Toyota has redesigned the Tacoma for 2016. If you loved the long-running generation of previous Tacomas, you're certainly going to love new 2016 Toyota Tacoma too.

• 2018 Toyota Tacoma trim levels. What you get with each trim configuration.